Back on the savoury path. My husband bought so many packets of crisps. I was shocked at how many! Loads of them. I don’t know when he thinks we are going to get through them all. Included in the stash was this. So I had to try them, didn’t I? 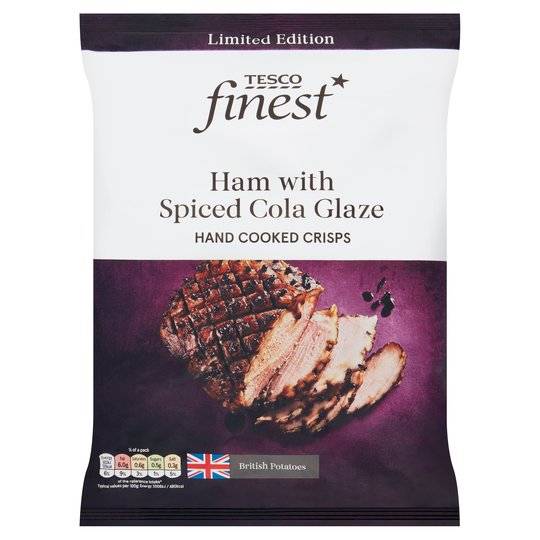 ”Cola glazed ham flavour potato crisps. Hand cooked crisps. Our experts work closely with local farmers to select the variety of British potato that gives just the right crunch. Each potato is carefully sliced and fried in small batches under the watchful eye of specially trained fryers. They stir each batch gently, select the best crisps, then tumble them carefully in seasoning for a perfectly even coating."

I was a bit skeptical at first with these. Cola glazed ham? Well I suppose you can get maple glazed ham and I know people cook ham with cola, so I guess it was inevitable for someone to come up with this as a crisp flavour. I had my first crisp. The flavour was strong, but not strong ham or cola flavour. To me it tasted like a sweet but strong tomato ketchup flavour crisp. Then after that punch went, I then got to taste the sweet ham flavour. You really had to look for the flavour though. I batted my tongue against the roof of my mouth to get as much flavour as I could into my tastebuds. Yeah I got the ham flavour, but it doesn’t smack you in the face.

These crisps were nice. Not very hammy, but alright. I guess the sweet strong taste I got at the beginning was the cola flavour, but if you wanted a good ham flavoured crisp, then these aren’t for you. I’d definitely say try them, but I wouldn't go out of my way for them.