As much as I am a fan of Cherry Bakewells, I saw Mr Kipling had brought out these Trifle Bakewells. They looked quite sensational, and after the Apple, Pear and Custard Tarts, I quite fancied trying something else with custard in. 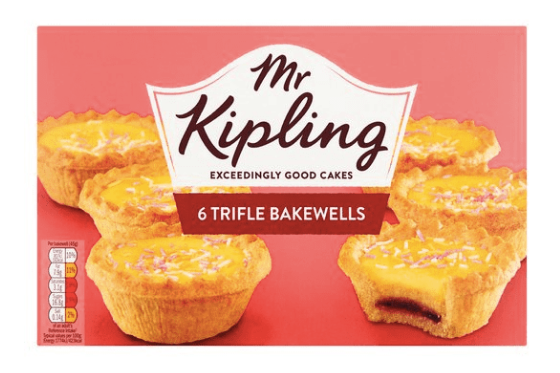 ” Pastry cases with a layer of plum and raspberry jam and vanilla flavour sponge, with a custard flavour topping and multi-coloured sugar strands."

I’m pleased to say the pastry is the same as the Cherry Bakewell ones. That lovely buttery, crumbly pastry with a hint of salt. Just Yum! I really like the look of these Trifle Bakewells too. They really do look like the top of a traditional trifle with all those hundreds and thousands. The custard has a great flavour too. Reminds me of a Custard Cream biscuit. I’m pleased to say the filling and the jam are the same as what’s inside their Cherry Bakewells. I great fruity taste. Everything works so well together. I might even go as far to say that these are better than the Cherry Bakewells!

A great little trifle tart. The only thing I would say that’s missing from being like a traditional trifle is the cream. There is no cream in this, but I’m only joking here. The Trifle Bakewell really doesn’t need the cream. It’s sweet enough already. I can’t believe I found a bakewell that’s on a par with the cherry ones. That’s saying something. If I had to choose between one or the other, I’d have a struggle on my hands.