Finally! I managed to get round to eating an original box of fancies.Let me tell you a story about these. It all started from childhood. These were my favourite cakes. One day I decided to eat the chocolate ones as they were my last favourite. I left the pink and yellow ones as they were my favourite and I even arranged them like a checkerboard. I was really looking forward to have them one evening. I even wrote my name on the front of the box. Then that evening, I was in the living room with my family. My dad had taken the box. I knew it was mine as I saw my name! He sat there eating one by one. I just couldn’t believe it! I was about 16 yrs old at the time. He must have seen my name on the box, but proceeded to eat them slowly and all in one with each cake! I was livid! I didn’t say anything, but I did after he finished them. Ever since he has bought me a box of French Fancies, … but it’s just not the same!!! 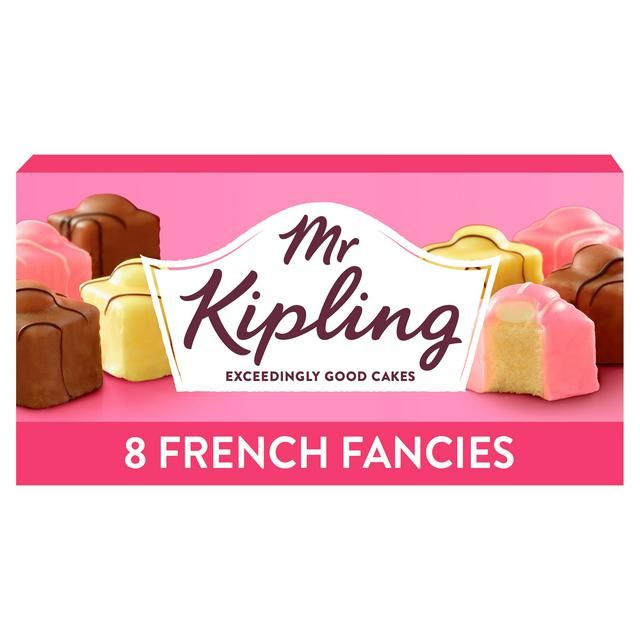 I can’t tell you how many of these boxes I have had over my time. What I really would like to know is who decide to put three flavours into a box of eight? This doesn’t bode well for having equal amounts of everything. They should have done four flavours or two flavours, not three! Even with the three flavours, who decided on having three chocolate ones? I would have been much happier with three pink ones and three lemon ones! Now down to the actual fancies. The only thing I would say about them this time is that there was a serious lack of quality control. Two of the fancies were on their side and a few were not covered fully with fondant. Someone definitely let the side down! I like my cakes to look near perfect, but these looked like a rush job. I do think they have changed the flavouring of the chocolate ones too. Although they are my least favourite, the chocolate seemed a bit weak. In colour and flavour. I remember the chocolate looking quite a bit darker and the flavour was much more chocolatey. The lemon ones were still lovely and lemony citrus flavour. The pink ones… I’m sure they taste of strawberry… well I hope that’s what the flavour is meant to be, because I have no idea what flavour ’pink’ is. Each fondant had a good about of white vanilla creme on top too.

There have been a few occasions where someone missed the mark and only put a small blob on top. This time was ok. I’d go mad if I had to put up with lack of creme as well as badly decorated fancies. I still really enjoyed these. Funny how I’ve never seen a box of pink or a box of chocolate ones. When I say chocolate, I mean exactly the ones you get in here, not the chocolate and orange or chocolate and mint ones I have already discussed. I’d still have a box of these anytime.