Doctors are speaking out about Covid vaccines and being silenced

Canadian doctors and other professionals coming forward to warn the public about the dangers of Covid-19 "vaccines" are losing their careers and being slandered by the mainstream state media for their bravery. CBC, which is funded by big pharma and the taxpayers, published an attack today on 3 doctors from my province who have attended the growing anti-lockdown protests, or spoken out against the "vaccines". What don't they want us to know? 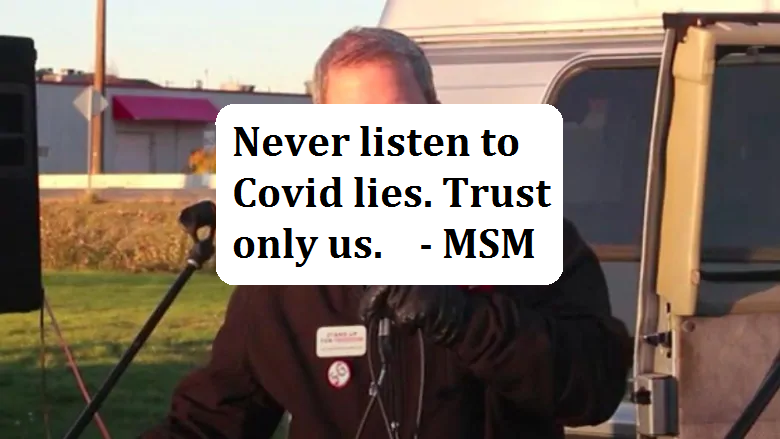 Pushback to the Covid narrative (lies) started day one, but has been kept from the mainstream until now, as anti-lockdown protests (like the ones I attend) rage across the country and can no longer be ignored by the owned media. Not content to merely slander such protests as "white supremacy", "domestic terrorism", and "dangerous extremism", now they have begun to name-and-shame doctors found to wander from the official party line.

Before I detail the slander against BC doctors speaking truth to power, I'd like to summarize the recent YouTube videos I've had deleted as a result of straying from the accepted narrative:

What hit a nerve? Anything about safe effective alternative treatments, anything about the harms being done by the "vaccines", and anything that contradicts the official narrative.

I stand behind all 4 videos and ask anyone to come forward to identify anything they find incorrect. As for being banned for discouraging social distancing, I admit that I'm guilty of that, but not ashamed, and I won't stop telling the truth and expressing my opinions. (YouTube has said they will delete my 15+ year channel of 900 videos if anything like this ever happens again. Ooooooh.)

But I'm just an ex-nurse. What are doctors coming forward to say, which is getting them slandered and censored?

"...some doctors are sharing false anti-vaccine and anti-mask ideas, as well as promoting treatments for COVID-19 that are not supported by scientific research."

So it's exactly the same stuff I've been saying all along, and being punished for.

"This kind of misinformation is a violation of public trust as well as the ethical obligations of doctors.."

Reporters are now the authority on medical issues, and doctors are to follow their orders? Something's not right here! If they weren't owned by big pharma (literally) it might not be so glaringly obvious, but come on! You're not allowed to hear the truth about vaccines because the vaccine makers own the radio stations, TV stations, newspapers, and social media. It's that simple.

One of the slandered doctors, although they misnamed him "William" in the article so readers couldn't search for the truth, is Doctor Charles Hoffe from Lytton BC. Lytton is an isolated town of 900, and was chosen to receive the "vaccine" (Moderna) before anywhere else, due to the high proportion of Native people in the community. After no deaths and no problems from Covid, they have experienced a rising epidemic of side effects since January, including at least one suspected death. Some of Dr. Hoffe's patients are in so much pain and discomfort, with no end in sight, they want to be dead. He spoke out a few weeks ago and was told to shut up by "doctor" Bonnie Henry (the provincial Covid figurehead). Dr. Hoffe courageously stood up for his mostly-indigenous patients, advocating for them and telling their stories when nobody else would, as big pharma's experimental shot wreaked havoc on their health. I covered his story here. It went viral on all platforms, except YouTube, where it was deleted within minutes of upload. I was banned for 7 days.

"Misinformation from doctors is particularly damaging in Indigenous communities, which have been disproportionately affected by the pandemic.."

They spin it like Dr. Hoffe tried to prevent his patients from taking the "vaccines". He merely reported the ensuing months of carnage he witnessed after injecting the town with Moderna's product as ordered. CBC implies the doctor is racist against native people, which is clearly not the case, as he has faithfully cared for his patients in Lytton for decades, and is adored and respected for it.

Provincial officials (Dr. Hoffe's bosses) announced that he was lying, and threatened his career if he continued.

"The COVID-19 vaccine needs to be delivered to Indigenous people as quickly as possible."

How does the media know so much about medicine and health, that they can call experienced licensed doctors liars, and print whatever medical facts they please? How does CBC know these warp speed products are the best possible health decision for everyone? How do they know better than these peoples' doctors?

The article also mentions Dr. Stephen Malthouse of Denman Island and Dr. Bill Code of Duncan, who they vilify as peddlers of snake oil treatments (like HCQ and Ivermectin) and critics of the mRNA vaccines.

This is the same mainstream media that has failed to report that spike proteins ARE Covid-19, a revelation confirmed by the world's top experts over the past several weeks, which should put a screeching halt to the mass injection of billions of humans underway.

Censoring any evidence that something is wrong smells of desperation, not of truth, not of "keeping the people safe from disinfo". Doctors are risking their careers in massive numbers to go against the official narrative, and still the media pushes onward with the lies and fear, in their all-out attack on "vaccine hesitation". If anything, these tactics make me MORE hesitant, not less, and I'm not alone.

Something seems horribly wrong with this entire "vaccine" narrative!