A story from my youth: The ugly tree 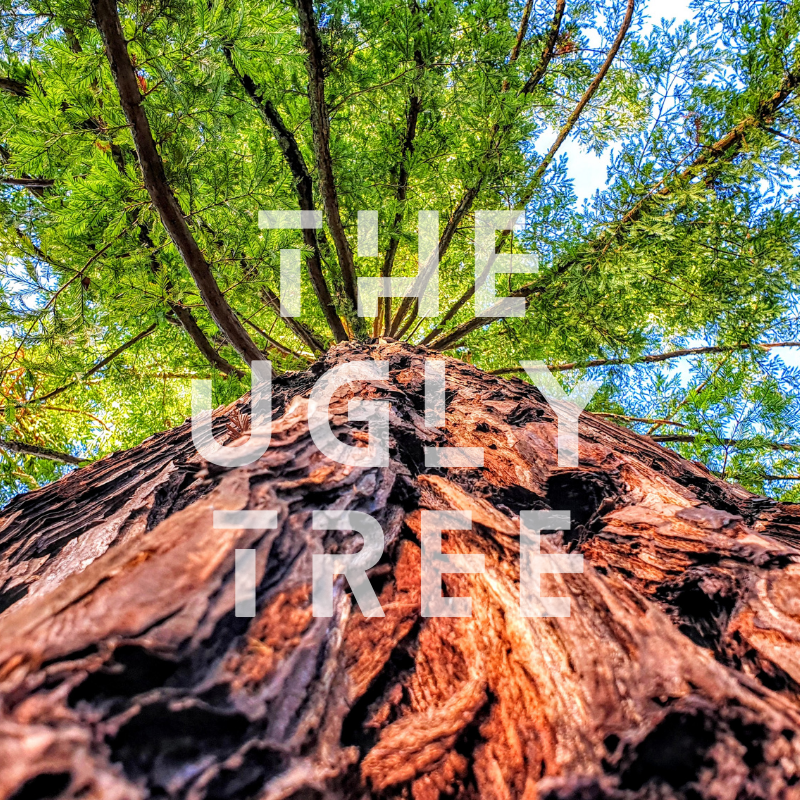 Why are you so ugly G-dog?

A question I get asked a lot; it's unsurprising really because, well, if you saw me you'd get it I think. Count your lucky stars you don't have to look at me though because who likes looking at ugly things? No one.

It's a good question though and I think it's time to finally explode the myth and legend that has confounded historians for years with the truth.

So here's the truth.

"Look how high I am," the neighbour-kid said with glee and I looked up to see the pasty-white skinny kid we called Fatso in a branch about a quarter the way up the tree.

I wasn't impressed. "Pretty high Fatso," I said flatly and with a heavy dose of nine year old sarcasm which the little runt deserved.

"As if you could do better!" His pallid white face glared down at me just as a slug might glare at someone who'd just turned over the rock it was hiding under.

"Can too!" I wasn't one to shy away from a challenge; a personality trait that started young, caused a great deal of pain and embarrassment, and endures to this day. [Although I have more sense now.]

We'd been playing outside all day: Myself, slug-boy [Fatso] and a few of the other neighbour-kids. We always seemed to end up somewhere on the property at my house as the grounds were extensive and there was always something to do.

It was just after lunch, sandwiches which my mum had provided, and we'd been climbing trees engaged in war games; throwing rocks and anything else we could find at each other as boys do. That's when the challenge was issued and I was up for it. I'd climbed this tree many times and whilst I'd never made it to the top I knew today was the day. I was going to show Fatso how it was done once and for all.

I started climbing like the little brownish monkey I resembled; not yet ugly, just sort of really cute.

My monkey arms and legs did the work as I had no monkey tail however if I had one the climb would have been much easier. Nonetheless I moved upwards soon passing the spot where the milky-white Fatso had called down to me from.

Loser, I thought as I continued past what he had thought were dizzying heights. I looked down at the others with a grin reveling in their looks of despair and lamentation of their own inadequacy, and awe at my monkey-like tree-climbing prowess. Loooooosers, my monkey-looking, but cute, face beamed down at them.

As I climbed my mind had visions of standing atop this tree, arms out-stretched to either side, palms open facing upwards as I bellowed behold the glory and bask in the light of my magnificence, in my little nine-year-old's chimpy-voice.

Those fools below will abase themselves, their unworthy heads pressed to the ground as they hailed their monkey-king; the lord of the top of the tree!

I came back to myself through sheer force of will, the vision of my triumph fading as my focus turned back to the climb.

I was almost three quarters up and...This is a long way up, I thought to myself. I glanced down which ultimately proved to be a questionable decision. It was a long way down.

I held position through the mighty, and well known vice-like grip called monkey grip, and contemplated the climb above and the distance to the ground below. Part of me still wanted the glory and hero-worship that would come from reaching the top of this tree but another part of me just felt...Dizzy.

That's when it happened.

All of a sudden the ground was rushing upward to meet me...Oh no, that wasn't the ground rising, that was me falling. Somewhere along the way my monkey grip had suffered a catastrophic failure and...Gravity took care of the rest. My little monkey-body tumbled downwards which didn't seem too bad at first and then the first branch hit my face and things went pear-shaped from there.

Clip branch with side of face.

I groaned and not in a good way. It was one of those, I just fell out of a fucken tree and hit my face on every branch on the way down, sort of groans. If you've ever done it you'll know what I mean; if you haven't done it, don't. Trust me.

I lay on the ground in pain with the neighbour-kids laughing at me. I heard it reaching me even through the fog of pain and then I heard some words. I was trying to catch my breath which had made a mad dash for freedom from within my lungs as I hit the ground, gasping for air, rolling on the ground, blood gooshing from my face as if it had somewhere more important to be and no time to get there...I heard the fateful words:

"I told you you couldn't do it!" Fatso, gloating over my abject failure.

That little skinny, anaemic, whey-faced, bloodless, slug-looking little weasel! When I recovered I'd show him for sure...I'd climb that damned tree - I'd not let it beat me.

I never did though. Its lofty heights eluded me but not for lack of trying. The problem was that I grew faster than the tree and as I gained weight its branches simply wouldn't support my weight. It remains a unicorn to this day, rare and unattainable, but it left it's mark on me forever.

So, why am I so ugly? Isn't it obvious? That tree was an ugly tree, of the species called metauglius asfuckostroboides and, much to my great misfortune I hit every damn branch with my face on the way down.

I'll be honest and say that I'm not sure there's a moral here at all. All I can say is as a fifty one year old I look back on these most idiotic of times and smile grateful I had a childhood that allowed me to explore myself and my limits plus allow me to gain valuable lessons; although many came painfully.

My never-quit ethos is something that endured. My ability to find courage within, to stand for what is right, to push forward when it's easier to capitulate and to accept failure for what it is, a step closer to success is what I learned as a kid and developed as an adult.

Image is my own.