Last night I've got a PBS program on as background to a video game I'm playing on my laptop. It's about building the highest building in the world, there are several in progress. The owner of the Shanghai Tower went off on how we must have a constant reminder not to get complacent and always strive to be the best.

While it's universally accepted that these are good sentiments, I still have to ask: why?
Why must we always strive to best everyone else?

One reason that comes to mind is that there is always competition out there. If we are not the "best" we're that much closer to failure and threat. That's one way of looking at it. But really, if you have the resources to build the worlds tallest building, there's more going on than fear of losing. There's also the component of continuous striving to go further into discovery and accomplishment. There is a trait that can be useful for humanity 2.0, that of continuous improvement and interminable curiosity. The underlying reasons should, however change.

It could be argued that building the tallest skyscraper is just a survival display taken to extremes. The need for accomplishment can still be narrowed down to the self as primary motivator. Even if done in the name of some "higher cause" it has the aim of being better than others. Well, at least in the case of the world's tallest building.

Scientific discovery may initially come from a curiosity, then really expands when commercial uses are developed. So there's curiosity for the thrill of finding something out. These curious, ingenuous folks seem to have a lot in common with my 2 dogs though, Tex and Tillie. 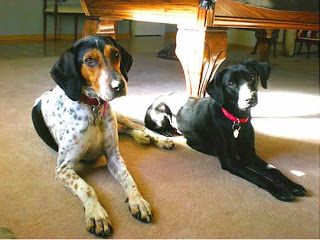 These guys are relentlessly curious, and ingenious. I've had them for about 3 months now and in that time they've gotten into every crevice of my house looking for nutrients and whatever. They even found a way to open up my parrot's cage to eat his food and droppings. Our back yard is completely surrounded by a 6 foot fence that they've managed to breach in 5 different places, and in different ways: climbing, digging, chewing, moving obstacles...

They obviously love discovery and are quite motivated to advance their learning to achieve their goals. Even now Tillie is showing Tex, who's taller and can jump higher (she's much smarter), how he can take a running jump off a little bump on the lawn to clear the fence where, because of the bump, it is only 5 feet high.

So there Feynman, you did not invent the pleasure of finding things out. Tillie and Tex are just dogs, not scientists, but love discovery probably for the same reasons. The emotional rewards that come with finding things out are probably a critical survival trait, for both food acquisition (there's a delicious cat behind the fence), but also threat assessment and pack building. From this view, it looks like the drive for discovery is both innate and expressed by opportunity, so looking is fun. Actually making a discovery is a separate reward and reinforces the drive.

Back to the buildings, a blunt conclusion. The drive for striving to be the best is actually a striving to be better than your pack-mates. Getting to the point where you are building the highest building in the world at the time is a function of the same behavior as Matt Burke on Sadler street in Anderson Indiana buying a new Lexus to have the smartest car on the block. Obviously Matt doesn't have the resources to demonstrate mastery of resources by having the tallest building built, but that's because of circumstance.

As a side note - building the world's tallest building could also be driven by the same motivators of the builders of ancient monuments (e.g. pyramids) and public works (e.g. wall of Hadrian)(and current projects like manned missions to Mars) outside of their stated purposes. The process of building them would keep the population occupied, create value, provide income, impress opposition, etc.