Hello it's a me again @drifter1! Today we continue with my Compiler Series, a series where we implement a complete compiler for a simple C-like language by using the C-tools Flex and Bison. In this article we will visualize function calls, and how we use the Revisit Queue concept to solve the problem of knowing the return type and if the parameters are actually compatible with the parameter declaration, that happens much later on! The actual implementation will come in the next parts...

One of the most difficult aspects of the language that we are trying to implement a compiler for is that we are allowed to declare the functions after using them in function calls! In the actual C language you have to declare the function before-hand, and you can define the actual code of the function later on. So, how should we check different kinds of semantics later on? Well, in the function semantics articles, I talked about a concept called "revisit queue". This concept is all about adding elements that should be revisited later on to a queue (or list), and revisiting the queue right after the information that was needed is accessible.

In functions, the topics that need to be revisited are:
What we want to cover right now is the parameter check!

After this "recap" of the revisit queue concept, let's now get into a visualization! Functions are described by identifiers (IDs) and so stored inside of a symbol table entry. A function call is one of statement types (when returning void) and can also be used as a part of a larger or smaller expression (when used in assignments). But, either way a function call will occur inside of the statements and maybe even inside of the function declarations part. The function declarations are the final part of each program. In general, we can say that a program looks like this: As you can see, the parameter check takes it's information from the function call and function declaration. But, what exactly get's stored to the entries of the symbol table and revisit queue, while the whole process is in effect? The following diagram shows that: Let's dive more deeply into which exact changes happen to those entries.. 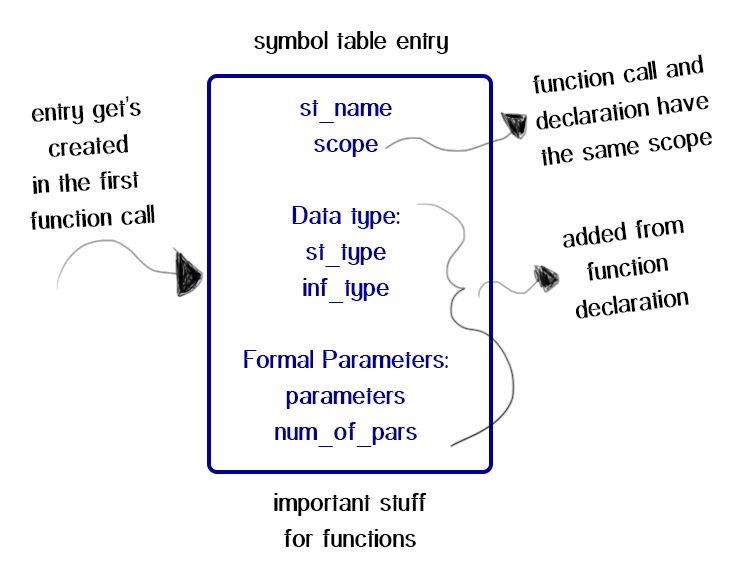 The revisit queue entry stores the information around function calls, which means that we store the datatype of each parameter and the actual count of them, for each function call that has to do with a specific function. At first the entry get's created, when creating the symbol table entry, by knowing that we will have to perform a revisit (not currently declaring). That way the whole structure can be visualized as: 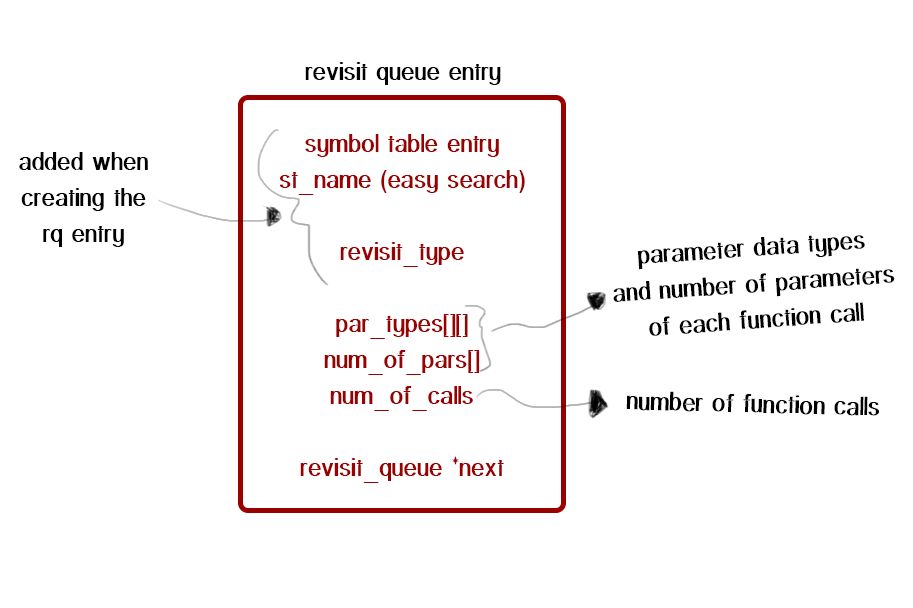 I just added some more specific information to the diagram of the entries. This information includes some of the needed functions and their parameters, to give you a better understanding of how we will implement it later on. I hope that this whole article gave you a great insight to the problem :)