Hello it's a me again @drifter1! Today we continue with the Electric Circuit Simulation series, a tutorial series where we will be implementing a full-on electronic circuit simulator (like SPICE) studying the whole concept and mainly physics behind it! In this article we will cover the Nodal Analysis Method, which is based on Kirchhoff's Current Law (KCL) and is used to calculate Node Voltages.

Nodal (Node-Voltage) Analysis is based on Kirchhoff's Current Law (KCL), which means that it's used to calculate the voltage in the various Nodes of the Circuit. This method is used in the popular circuit simulator: SPICE, and the same modification of this technique will also be used in our simulator! So, what exactly does this method do? Well, using a very efficient way of organizing the information from a circuit, we find the so called node voltage of all except one nodes of the circuit. The remaining node is called the reference node and almost always called the ground node. The potential of this ground node is defined to be 0V (In spice net-lists node 0 is the reference node). The potential of all the other nodes is measured relative to the ground.

Before continuing with the steps of the method, we should first define what node voltage means! The voltage across the terminals of a single element is called an element voltage or branch voltage (as all elements are considered to be branches of the circuit). With node voltage we are referring to the potential difference between two nodes of the circuit, where a node is the connection point between two or more circuit elements or branches.

For example let's suppose that we have the following circuit: 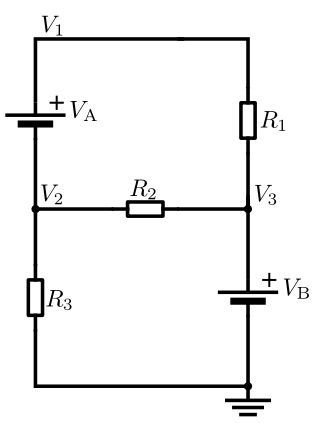 In this circuit there are 4 nodes and so we have to calculate 3 node voltages, because we "grounded" one of them to 0V. To apply KCL we also have to define which node has the largest potential in each potential difference (or voltage) calculation. This means that we will also have to suppose some current direction. If the current moves from some node A to another node B, and so from the + to the - pole of the element/branch, then the voltage is:

(In this case VA has more potential)

If the current moves from B to A, then the voltage is:

(In this case VB has more potential)

So, now that we have a way to calculate the voltage for each element, what's the voltage of the elements: R1, R2 and R3, in the case of the example circuit? Well, supposing V1 > V2 > V3 we have:

As always the direction of the current or the random hypothesis of which node has the larger potential will not have such a big impact on the result. The result might just turn out to be negative, telling us that we chose the wrong direction. The voltage of R3 is considered to be an easy node case, cause one node is the reference node. As you might expected already, the reference node can be any of the nodes of the circuit. So, we tend to select the node that "puts" the most zeros into the potential difference! Of course, this can't be automated that easily and so node 0 is selected "randomly" or directly from the net-list file... 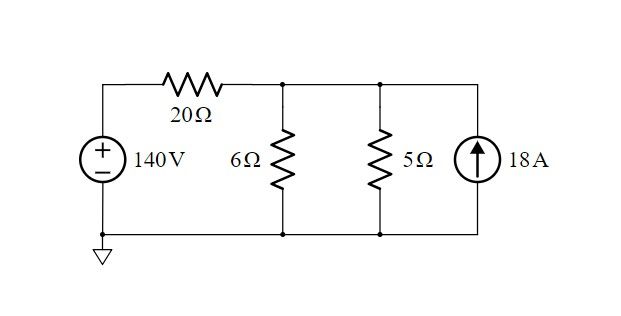 Let's apply Nodal Analysis to calculate the Current and Voltage of all Elements!

The circuit has the following 3 nodes: Let's assign the labels 0, A and B to the nodes, where 0 is the ground node: 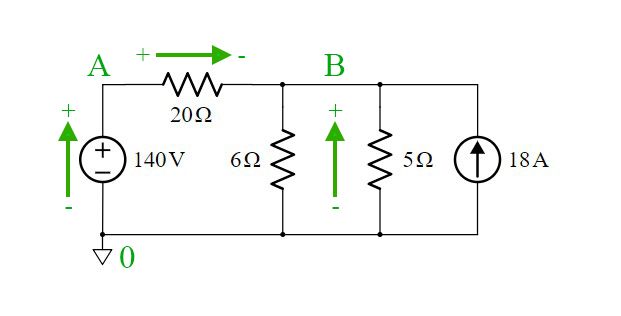 Before we get into KCL, we should recall how exactly KCL works. We can apply KCL as "sum of entering = sum of leaving currents" or we can also suppose that all are entering or leaving the node, by putting a negative sign if the current does the opposite. That way we will end up with something in the form: 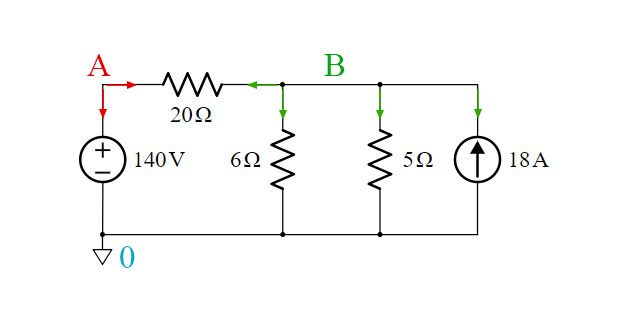 So, with all that in mind, let's start with node A. Without even thinking about the direction of currents in node A, we can already say that the voltage of Node A is equal to the voltage of the voltage source, which is 140V. Therefore:

For node B we apply the "leaving" trick:

Let's now solve the linear system! Of course this one is quite simple, as we already know the value of voltage for node A (VA). Either way we have: 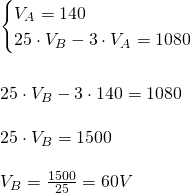 As you can see both voltages came out positive, as we never really supposed a current direction!

5. Solve for other Currents and Voltages

Let's now also find the unknown currents across all the resistors! This can be done pretty easily by applying Ohm's Law:

To understand how we will get into the Circuit Simulator applying this exact method, let's solve the previous problem using Python! You will again see that the method can't be automatized right now, which means that we will have to modify it a little bit...

Either way, the code for solving the previous problem is:

Running this code we get the same results as before:

And this is actually it for today's post! I hope that the Full-on example and "Manual" Python Implementation helped you understand what this method is all about!

Next up on this series we will modify the two methods that we covered (Mesh and Nodal Analysis) by Inspection to create the Linear System somewhat automatically, without having to apply KVL and KCL correspondingly.