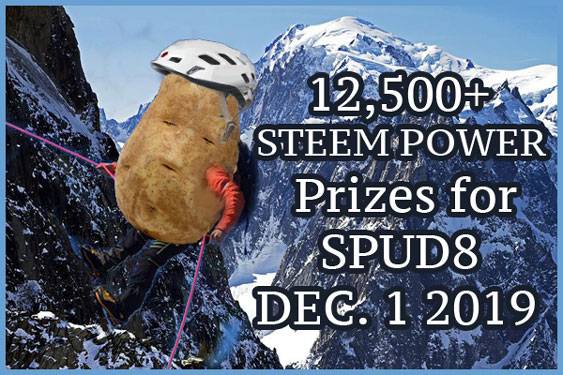 It is once again just about that time where we, members of the Steem community, come together with one common cause; to lock up that STEEM into STEEM POWER. Recently SPUD met its cousin in @sbdpotato , who's cause is to raise the price of the STEEM DOLLAR (SBD) in order to peg it back to 1 US Dollar, and thereby hopefully also positively affecting the price of STEEM. I believe that SBD POTATO has been very successful in its short time striving for this achievement. The price of SBD has risen sharply in the last few days, and looks to go up around another 20% where it will hit the Dollar mark with the efforts of SBD POTATO. Also, the STEEM price has gone down to some of its lowest prices ever, and now risen slightly up.

Now it is SPUD's turn to dig deep, spread its roots and sprout the biggest yield of STEEM POWER yet! The prizes for those qualifying entrants has grown steadily every month, and now for SPUD-8, there will be over 12500 STEEM POWER Delegations and other prizes.

Here is the list to the SPUD 7 WINNERS.
- Will they Power Up enough to keep their delegations or will we see new winners?

What is SPUD and How Will It Help?

For those who do not know what SPUD is, STEEM POWER UP DAY (SPUD) takes place the first day of every month.
On this day:

The prizes are meant to incentivize the smaller Steemians, the planktons, minnows and aspiring Dolphins out in the Steem Ocean to participate in powering up on SPUD, and hopefully create more understanding as to why Steem Power is what makes the Steem Economy.

Rules to Win Prizes for SPUD8 :

On December 1st, you MUST make a post about your POWER UP. It can be as simple as "I powered up X amount of Steem" to a simple picture/screenshot of your Power Up and posted to your Steem blog, or it could be a super long dissertation on Steem Power. IMPORTANT: Use the SPUD and/or SPUD8 Hash tags so that I can be sure to see them.

The winner Must meet all 5 requirements, and will be the one with the Biggest Steem Power Up PERCENTAGE, not the biggest Power Up. This means that it will be based on the ratio between your current amount of Steem Power and the amount you power up on December 1st.

another Steemian has 200 Steem Powered up prior to December 1, and on December 1st Powers Up 40 Steem, then this 2nd user would be winning with a 20% power up versus the first example with a bigger power up but smaller percentage of only 10% based on their account.
__

The winners will be announced via a Steem Post a few days later, and if no one challenges it or lets me know I missed them after 2 days from Winner Announcement, the Winners become official and the prizes will then be given out.

Thank you to All our SPUD Prize Sponsors and to all SPUD supporters and participants working to get STEEM to higher Elevations!!