The 'Real' Housewives of Beverly Hills

Because no one has a compelling storyline, I present to you -- Erika Jayne. 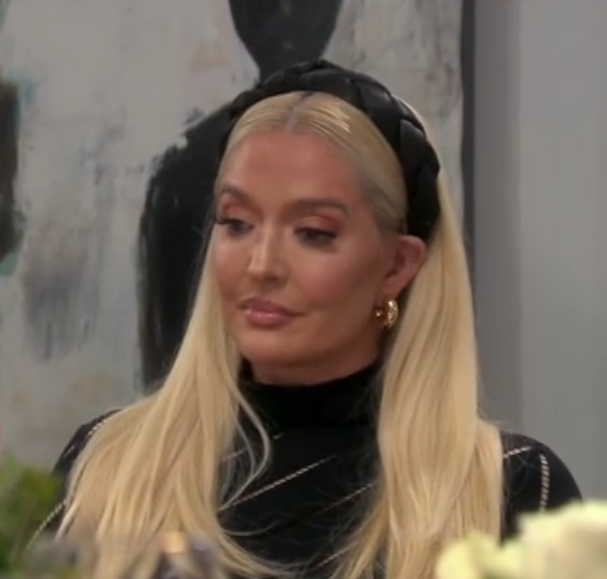 Long, long before God led me to Christ I was an avid watcher of ALL things Real Housewives and Bravo TV. I believed that Andy Cohen was a humble, Jewish boy who worked hard to get to attain his goals of being a producer and all-around Fan Boy. I commended him on pushing through and being a gay man in the television industry. I admired him and thought he was congenial and relatable when the women on these franchises were not. He was the Greek Chorus, the quirky looks we all made in our homes during moments in reunions when these ignorant women spoke indignant and incredulous things to each other. And like most things in my life, leaning on my own understanding, boy, was I wrong.

There was a time when Real Housewives was true to who they said they were even though we all knew that not a one of them was 'real' and the cost of what they lavished upon themselves in false entitlement was displayed at the bottom of the screen, from fake eyelashes applied by salon employees to skincare treatments administered by Dr. Karyn Giese. We were all drawn in by their connections to big names, their husbands' illustrious careers and then a realization that their lives were in fact, WORSE than an actual real housewive's could ever be.

We were subjected to nary a moment of screen time when I couldn't point out to you a glass meant to hold alcohol and that meaning fulfilled, all manner of venom being spewed by godless women who not only thirsted for money and power but prostituted themselves in order to obtain both and once seemingly attained, lorded it over other wives in said groups as if they hadn't been brought low at some point and owed nothing to anyone for having achieved their current station in life.

When Erika Jayne first appeared on the scene in Beverly Hills she was in my own words 'sleek fabulosity', a woman fawned over by gay choreographers for her voluptuous body and steamy sensuality. Did I admire her? No. I'd learned enough by then not to worship in any way any of these women. With my paltry monthly salary my contentment rivaled their own and I wasn't injecting myself with botox, filling my breast pockets with saline nor vying for eternal youth. I DID like that she was quiet, thoughtful and had no female friends to speak of. But then we all admire those things in others that are either so unlike ourselves that they become inspiring to us or so like ourselves that we have a soft spot for their struggle.

She defended her marriage to a man 30-some years her senior tenaciously. She kept things hidden and locked inside and we all wondered what went on in that house on a daily basis. She seemed grateful for the life Tom Girardi provided to her and the love he showed to her young son of his own volition, when he didn't have to. And I think that she was.

Now watching the handful of shows I still do watch, for reasons having to do with identifying with the population deceived by the ruler of this world lest that relation delivering a possible seed of truth to a dweller of this earth, I am appalled and yet know full well that this season's drama was manufactured. Bravo TV is NO stranger to social engineering and hasn't been for a LONG time now.

How anyone can honestly believe what this woman is claiming is insane to me. Perhaps in some way she believes that by exploiting orphans and widows and in turn allowing her story to be exploited that's some sort of penance. But one also has to consider that she now has no cash flow and is whoring herself out to Bravo producers for cash to keep up a semblance of her previous lifestyle and that she's also saving face in a flurry of lawsuits painting her in the most horrifying possible light.

We can all be saved by the love and sacrifice of Jesus Christ but these people are not looking for salvation. It was Erika herself who said 'Give me a prayer circle, give me a lunar eclipse, a quaalude, anything but confession' ending the phrase with a haughty laugh.

The addition of Garcelle Beauvais, '90's actress and rap video starlet but most importantly Jamaican immigrant with dark skin and Crystal Minkoff, 76th generation descendant of Confucious himself, amidst a cultural resuscitation of 'institutional racism' and a newly-ushered-in 'Critical Race Theory' hasn't provided entertainment or a driving storyline for EITHER of these characters in my opinion. They are the tokens in this group and sickeningly do their very best to 'educate' this unfortunate, uneducated, wealthy group of white women on the hardships of being filthy rich and terribly popular while regaling them with childhood stories of racial slights before they were or married big names. It is sad to confuse your obvious exploitation with relevance but I certainly believe a little fame can go to many people's heads and I'm sure that deep down they think they have something of value to share with the world. It's always about the downfall, the martyrs and never about actually coming to Jesus, actually repenting and actually removing yourself from these toxic situations. They won't, though, because all that glitters is gold in their minds.

There's not a fiber of my being that believes Erika didn't know about money meant for orphans and widows being deposited into her LLC by her attorney-husband of nearly 20 years at that point. I do not believe she did not have access to her own account. Watching her sit in this group of women as they question her integrity and forthrightness I see tactics I've personally employed when I've done something wrong and don't want to address it or be honest with others, lest I lose something or someone important to me. She has single-handedly setup an entire farce of explanation about who Tom has 'become', her 'knowledge' of the situation and there's not a bone in my body that believes she didn't know exactly what was coming down the pike.

Marry for money and pay for it the rest of your life.

Sniper from the side? Takes one to know one.

If you truly consider it, Bravo TV is ALSO exploiting these orphans and widows. And why wouldn't they?

All of these woman have connections to people I consider to be part of a network of evil in the world. I noticed it back when I 'woke up' in 2009. At one point I wanted to watch their downfall and kept tabs on them. Then I saw the social engineering begin and at present the ENTIRE franchise is NOTHING but social engineering and a liberal-leaning swamp. I'm not chastising my liberal brothers and sisters. I think that we are ALL deceived, conservatives included. The level of sin packed into these shows all peppered with singing sirens who possess not a shred of humanity or authenticity is what baffles me. It also secures and strengthens my faith in the Lord, Jesus Christ, who is coming. It is all smoke and mirrors, encouraging greed and coveting of your neighbor's wife. They all reek of the spirit of Jezebel.

Erika uttered a grand total of 3 words altogether in past seasons compared to the absolute parrot that she has become this time around. The damage control and manipulation is astounding and I'm sorry to say this, more than obvious to me. Anyone standing in truth is being afforded vision that is staggering and a righteous witnessing of such outlandish lies. And so I not so much pray for these people who have welcomed deceiving and being deceived themselves for their depraved wants but those who follow these women and delight in their wickedness. Once He is in you, you truly do start to look at things differently and I would love nothing more than to have women who every week pour wine and sit in front of this madness to at least see what's going on here. This is not entertainment, it's witchcraft and divine feminine nonsense. There is a serious spiritual war for your souls going on at this time and to be honest, there always has been and will be until Jesus returns.

God is patient and wants us all to be with Him for Eternity so please understand that the time you still have left to find Him He is allowing because of that. Seek Him and ye shall find Him. There's no better time than the present to invite God into your life and to meet His son, whom if you repent sincerely and realize His sacrifice for your benefit, if you deny yourself and take up His cross your life will change in the most amazing and beautiful ways.