This year's beginning of autumn turned out to be quite busy for me for various running starts, and at the same time interesting trips. Since the beginning of autumn, we have been able to visit interesting Ukrainian road races ("Izmail Marathon" and "Bila Tserkva Marathon"), as well as run the mountain trails of Ukraine and Croatia ("Runa Run Trail" and "Ucka Trail"). 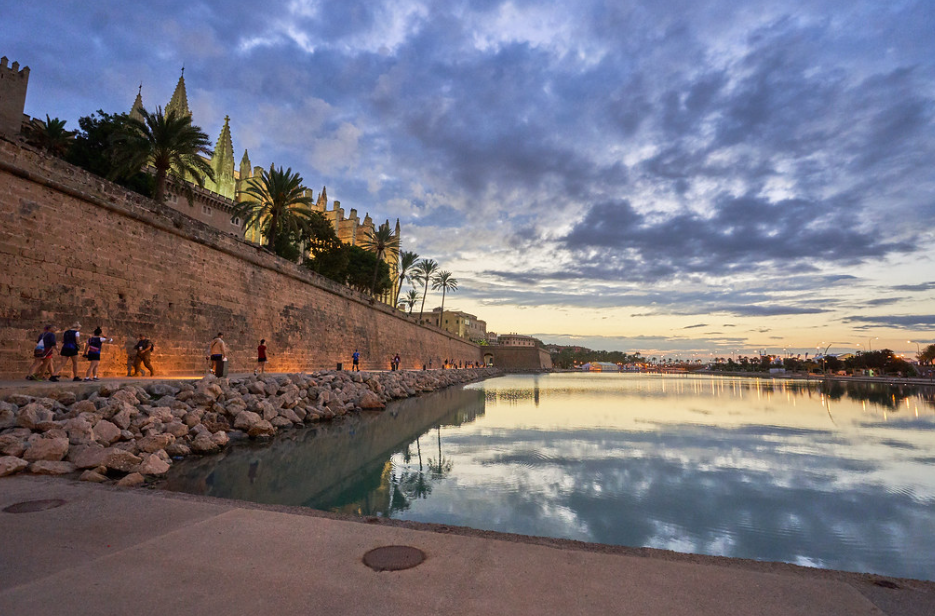 But with the arrival of cloudy autumn, I wanted to go back to summer for a while and bask in the sun a bit. And memories of the end of 2019 and a running trip to Malaga immediately flooded my mind. So I decided that this year we need to run again, some interesting marathon in Spain. He decided to stop his "Palma Marathon", which takes place in the capital of the Balearic Islands, the town of Palma de Mallorca.

You can register for the "Palma Marathon" on the official website of the marathon - palmademallorcamarathon.com. Where participants can choose both the main distance - a marathon and one of the satellite distances of 21 and 10 kilometers. The cost of the main distance starts from 45 euros. The marathon route runs along the promenade and the historic streets of Palma de Mallorca. But for a marathon, consists of two laps of 21 kilometers each. In addition, on each round, participants will have four hydration points, where participants can freshen up a bit (with water and isotonic) and eat fruit.

The start of the next running adventure started on Friday morning and immediately with a little annoyance, as it confused the airports a bit, so we had to listen to the taxi driver muttering about it. One thing was gratifying that it was the only trouble that befell me on the way and which was quickly forgotten as soon as the plane landed at Palma Airport. Upon arrival, he immediately decided to start his acquaintance with the city and its streets, which is a few days will need to be conquered, settle in a hostel, and rest after the road. Since the next two days were to be quite busy. When walking around the city immediately began to catch the eye signs of preparation of the city for a running holiday. Where the marathon route was to take place, signs could be found informing residents that the roads would be blocked on Sunday morning. The distribution of starter packs to Palma Marathon participants began two days before the start of the marathon near the local cathedral. On the first day (Friday) the participants had a morning run and "SportExpo", on Saturday "SportExpo" and "Pasta party" were planned. I decided to visit the starting town and pick up my starting number, and at the same time take a walk on "SportExpo" in search of something interesting on Saturday. Here I can say that I expected a little more from "SportExpo", because here I wanted to find information about other Spanish races, and it turned out that apart from T-shirts or shorts there was nothing more interesting for me. Realizing that there was nothing particularly interesting for me at SportExpo, I decided that it was time to find a free deck chair and enjoy the sun and the panorama of the cathedral. The main purpose of this trip, namely the start of the "Palma Marathon" began at 8 o'clock on Sunday morning. Therefore, from the very morning on the streets of Palma, you could meet runners, as well as in hostels and hotels. Since the Palma Marathon has not only a marathon distance but also satellite distances, the start of different distances took place separately. First, the participants had to run a marathon, then 15 minutes later - a half marathon, and all this closed the start of the participants for 10 kilometers. No matter how I feel about races in which the route consists of several laps, but this year I am definitely lucky with them. One thing was good, it was necessary to run only two laps. But the scenery was quite interesting, which was definitely pleasing. The first part of the marathon started quite comfortably and the sun was not particularly bothersome. And the first part of the marathon was completed in 1 hour and 55 minutes. In addition, on this part of the route, I decided to stick to a pacemaker that ran for 4 hours, was naive, but sometimes you can dream. As for the route of the circle, the first 12 kilometers pass along the waterfront and the last 9 kilometers through the streets of the city. The circle itself has several ascents, the largest is at 4 - 6 kilometers and smaller ones are already found in the city itself, in addition, there are many cobblestones on the streets of the city. If the first half of the marathon allowed me to dream a little, the second part of it, together with the sun and a lot of previous races, quickly brought me back to reality. And as I didn't want to, but I had to cross the finish line in 4 hours and 53 minutes.

Well, the "Palma Marathon" left behind a lot of positive emotions from the good organization of the running event. Although a circular, the interesting route, especially the section that passed through the streets of the city. But most importantly, it is great to support marathon participants by residents and guests of the city, especially it could be felt in the narrow streets of the historic part of the city.

Thank you for reading, I hope you found it interesting.
If you have any thoughts or opinions on this article then I'd love to see your comments.

Check out my website for more of my work.