Tales from the Fire Line 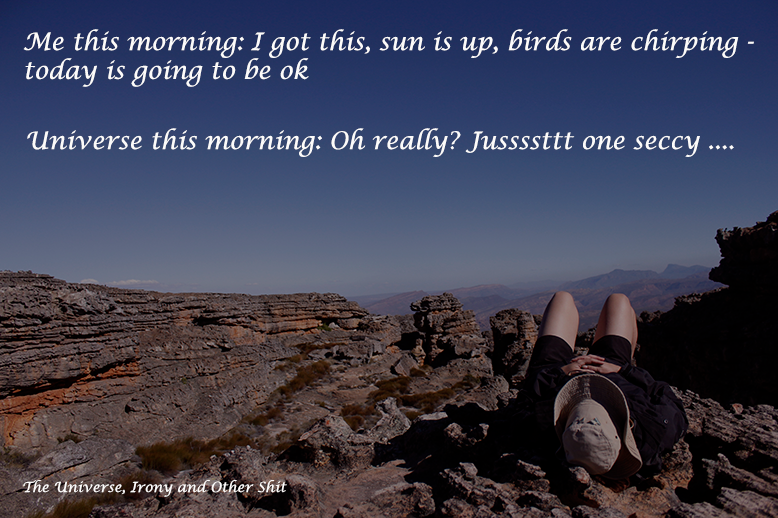 Photo by Clarien. Taken with my gear on my birthday outing to Cederberg, November 2015.

I found this quote years ago and had a good chuckle at it. Irony and sarcasm are my humour bread and butter, especially when I'm feeling cynical about - well, life the universe and everything in-between. I think the Universe has a strange sense of humour sometimes too because every time that I have tried to find the exact quote again, I haven't been able to. So I just remade the freaking thing this time. I'll probably get a big "up-yours" from the Universe in the next few days but I don't care.

The Universe and I have had an interesting relationship through my blink of existence here on this rock. Holy Shit has it thrown stuff at me, like it does at us all?! But mostly, it's had my back and most times it's been trying to teach me things.

Some of the lessons have taken years for me to finally get - hardheaded and stubborn as I am prone to be at times, but I think I'm getting the message now Universe. Thanks for all the fish, I'm not panicking anymore. Douglas Adams was awesome :)

In 2008 I was called out to a massive fire in one of natural areas that is surrounded by very fancy residential housing. You know, the ones that like to perch on the side of the mountain and look down on everyone else.

It had got out of hand (I never use the word control when talking about wild fires because well, there's no such thing as a controlled fire) and a Code Red was issued meaning all available fire fighting staff were required to respond. That included me and our contingent. In the fire-fighting world we were really no-bodies because we never dealt with structural or chemical fires and were only versed in veld (vegetation) fires.

When we arrived, I remember shuddering at what I saw and I knew we would be there for a while. This was a beast of a fire. It had already traversed a large portion of the mountain chain and was threatening the houses on the lower reaches. The approach to a fire is always filled with anxietment (this is most definitely a word and I am going to use it!) because your adrenaline is pumping and you are doing last gear checks like making sure you have three tubes of lip-ice in your pockets because you learn really early on that it's an absolute necessity. 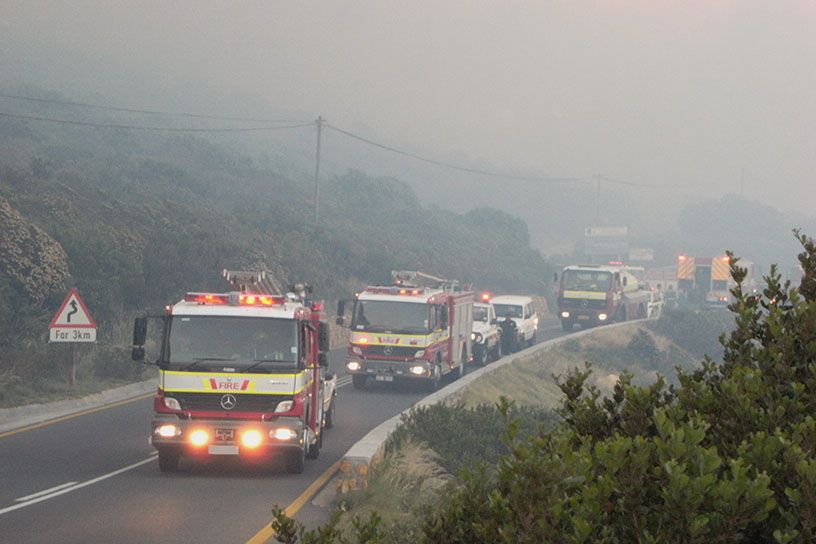 Photo by me with my gear.

The smoke on the lower reaches wasn't that bad, but looking up at that mountain, I was thinking "shit, that fire line is moving fast, this is going to be hard". And off to the JOC (Joint Operation Command) we went. Looking back at the various fires I've fought through my time in the sector, I was with some pretty darn special people. My core crew essentially consisted of myself, Eddie & Mark, a few students that I mentored through the years and the occasional volunteer - we were a weird bunch, quirky and full of shit at times, but when we got cracking, we were a force to be reckoned with. I miss those people and still sometimes see them. They are still there doing the selfless work and they are still amazing as individuals and as a team.

I have very few photos from on the actual fire line, there's never time to whip out your phone when you are bucketing water from swimming pools onto people's roof shingles that caught alight because they didn't clean out there gutters. This was what happened to one of the houses that we saved that day. You never really can be 100% prepared for what you are going to tackle. Every fire is different and you just have to think on your feet.

My crew leader had seen smoke coming from a roof and instructed me to track down a tanker to spray it down. I remember finding a tanker commander and requesting water over the blaring sound of vegetation alight and cracking trees ablaze, my voice sounded hoarse and thin from the smoke and ash. I'll never forget the look in his eyes when he said "The hydrants are dry and we've run out of water - you're on your own".

So we improvised. A wheelie bin filled with pool water, a dog bowl and a make shift ladder. My crew leader climbed up and we jumped into a conveyer line formation, sending up bucket after bucket. It was spreading under the shingles and our water wasn't penetrating the roofing fast enough, so my crew leader (who was my manager at the time) decided to up the ante. He got up onto the roof and started kicking the shingles off. Shit, he never cowered when it came to this. With a background in the army, he was fearless to the point of being almost stupid. I still have a lot of respect for that man, he taught me a lot. We saved that house that day.

When you are fire fighting, time does a weird thing. You lose your sense of it completely. Your vision and goals are sharply focused on the job at hand. A lot went wrong at this fire on some of the other lines, but fortunately nobody died. Please see discloser at the end

Our crew eventually got the nod to get some sleep. Tomorrow would be another long shift. We walked up the road and found a really well manicured lawn and we bedded down on it. Something I always loved about fires was that all your senses are heightened. Everything tasted absolutely delicious when you got to eat, water felt like liquid life and a soft grassy lawn? Oh my gaaawwwwddd - heaven!

A while later someone walked up to us and I honestly thought we were going to get kicked off our soft bedding by an angry resident. What happened surprised and melted me. This soft spoken man asked if we didn't want a slightly more comfortable place to sleep! What? Like MORE comfortable than this soft grass? All the residential properties had been evacuated many hours prior and he was one of the property owners. He offered us his house. The electricity and water had been cut off by the fire but there were couches and a shelter from the wind and elements. Gobsmacked.

We gratefully and eagerly accepted like children on Christmas Eve and he walked us to his house, opened it up and offered us free rein on everything in the kitchen that didn't require cooking, and the comfort of sleeping indoors for the night.

The generosity of people in situations like this often warmed my heart and restored my faith in humanity. I watched residents make the most beautiful sandwiches, lug bottles and bottles of water and energade and hurriedly bring them to firemen and firewomen as their way of saying "thank you". Perhaps I had been a bit harsh on the people who built their houses on stilts. I felt awkwardly ashamed in that moment.

It was pitch black with no lighting in the entire area so we made do with our headlamps and we fell in a pile using each others limbs and backpacks as pillows. One of the best fire sleeps I've ever had...and I've had a few. 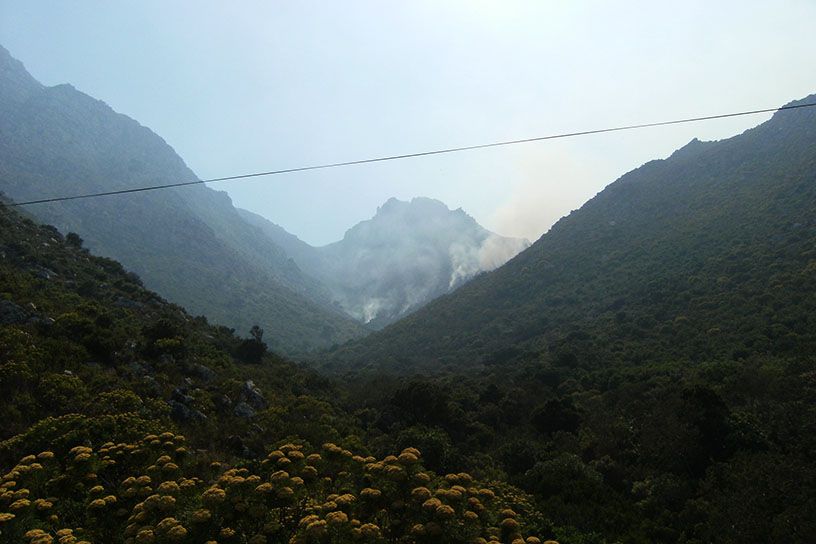 What happened in the morning though....

I cracked open my eyes after wiping away alot of silty yuck from my gunk glued shut lashes. Bright sunrise light was streaming through the blinds and then I saw the massacre around me.

The beautiful thick, soft fur pile WHITE rug which was probably more expensive than 3 months of my salary was um...soot covered with thick black footprints and smeared with ash from our slumber party. The walls where people had tred to find their way to the bathroom streaked with finger lines and grubby smears where filthy fire suits had touched the walls. My heart sank as I looked around and I literally just wanted to dissolve into the floor. This selfless man had offered us his house, not caring for his belongings, had opened up his home and we in gratitude had wrecked it. In hindsight I am sure that he had very good insurance, but still, I felt so guilty and ashamed. I felt squashed by it. I cleaned up what I could as best I could with what little I had to try and wipe away some of the gunk and patch it up, but to this day, I still carry that with me, I probably always will. I'd still love to one day find him and give him a batch of home baked biscotti, a massive hug and heartfelt thanks, but I have no idea where he is.

So Universe, listen up you! - please send him blessings and love and good things for being awesome! You and I can have it out later, but you owe me this. 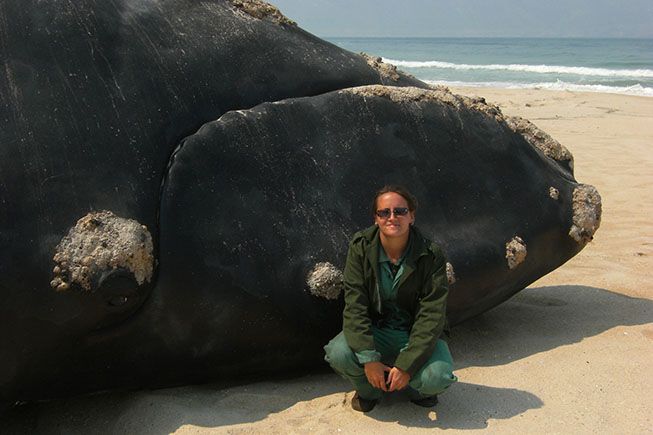 Photo of me that morning by Mr D - my mentor and manager, thanks for teaching me and putting up with my crap all those years. Taken with my gear. The whale is fake - it was some art installation to raise oceanic awareness. Pretty realistic though hey?

All content is from my own life experience and is my own telling of events. No NDA was or is in place with my previous employer to prevent the disclosure of such.