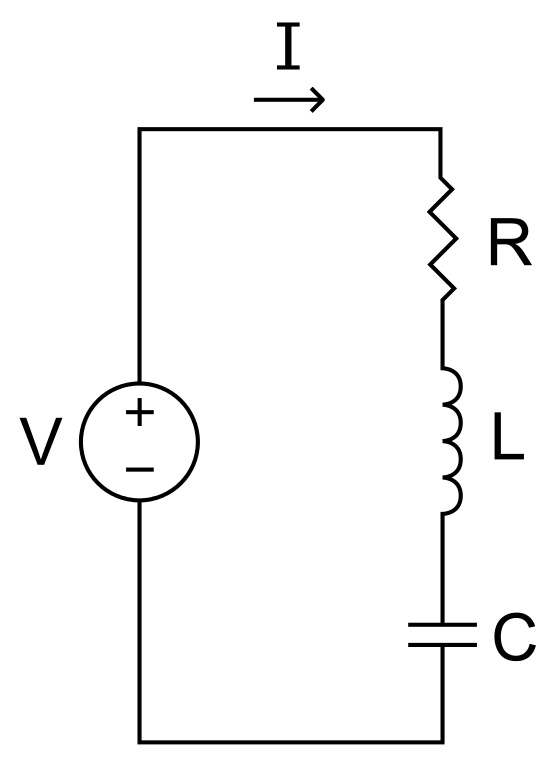 Hello it's a me again Drifter Programming! Today we continue with Electromagnetism to get into Resistor-Inductor-Capacitor (R-L-C) circuits! I highly suggest you to go and read stuff about the components which are the Resistors, Capacitors, Inductors, and also about the previous circuits that we covered: R-C circuits, L-C Circuits and R-L circuits...The most important has to be the previous article about L-C circuits. So, without further do, let's get started!

Last time we talked about circuits that contain an inductor with inductance L and a capacitor with capacitance C. But, such a circuit is not feasible in real life, cause these components and even the wires that connect them together have some electrical resistivity. Considering that the total resistance R of a circuit is stored in one resistor we then define the so called Resistor-Inductor-Capacitor (R-L-C) circuits, which are closer to "real life". As with the previous circuits, we will again only get into the series connection of those three components. Connecting them in serial means that the current flowing through each element is equal to the total current I that is flowing through the circuit (serial -> same current, parallel -> same voltage).

Parallel circuits will be covered when we get into AC current.

In L-C circuits we saw that the energy from the capacitor was "moved" to the inductor and vise versa in an continuous oscillation of frequency ω. At each period of this oscillation the capacitor started out fully charged, was discharged, charged again in inverse polarity and discharged again by getting back to the initial position. During that time the inductor started out fully de-energized, was energized, de-energized again and then energized in inverse polarity, de-energizing one final time to get back to the initial non-energized position. No energy is lost or created in such a circuit and so the total energy remained the same. The energy just changed from electric to magnetic, and vise versa. By including a resistor component, energy in form of heat will start to "leave" the circuit. This means that the total energy of the circuit will decrease at each oscillation, until it reaches zero. The capacitor will have a smaller charge Q at each oscillation giving the capacitor less electric energy, whilst the current in the circuit will be smaller and smaller, decreasing the magnetic energy stored in the inductor. I'm of course talking about the max-points, where each of those components has the total energy of the circuit, but the total sum of energy at each given point of the oscillation of course decreases as well! From all this we can understand that we now have a damping oscillation.

Consider a series RLC circuit that contains a voltage source V. Applying KVL for this circuit we find that:

A very similar equation to the one of last time, where we now also consider the voltage drop across a resistor of resistance R that can be found using Ohm's law (V = IR).

By doing the Calculus needed (solving the differential equation etc.) we can find the final equation of the charge in the capacitor is:

The coefficient of t is the so called oscillation frequency of a damping oscillation noted as ω':

When R = 0 we of course get the oscillation frequency ω that we covered last time! As R is increasing the frequency becomes smaller and smaller. At the point where R^2 = 4L/C the subroot now gives zero and so the circuit isn't oscilatting at all (critical damping). If we increase the resistance R even more, the circuit will be over-damped and Q will now be calculated as the sum of two decreasing exponential functions!

A cool simulation can be found in the following link:

You can see how the individual voltages start dropping, until finally reaching zero.

RLC circuits are being used in many many applications. More specifically the Series RLC circuits that we covered today are used in:

We will get back to these circuits when we get into AC current, which is actually the next topic of Electromagnetism!

And this is actually it for today's post and I hope that you learned from it! Without covering AC current, such circuits cannot be analyzed as in depth as the previous ones, but I still think that you got an overall idea. Next up in Physics are exercises/examples all around Mutual and Self Induction...including the 3 types of circuits that we talked about during the previous articles!