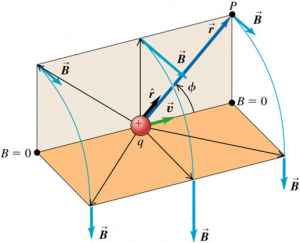 Hello it's a me again Drifter Programming! Today we continue with Electromagnetism to get into the first and simplest magnetic field source, which is a moving charged particle. A moving charge of course generates a magnetic field around it, which is what we will be discussing/analyzing today! So, without further do, let's get straight into it!

Until now we saw that charged particles create an electric field around them, which means that other electric charges are affected by their presence. But, this is not the only thing that is generated. Moving charges also create magnetic fields around them. Of course a charge at rest doesn't have a magnetic field, but it still has an electric field. And this is all just a physics rule that we have to accept! There is no way to truly explain this phenomenon. After some more articles we will see that electric and magnetic fields are actually components of something greater, a single entity, which is the so called electromagnetic field. One last thing that we should note is that the charged particle just has to move (needs some velocity), it doesn't have to accelerate (acceleration can be zero)!

Also, don't forget that charged particles are also affected by electric and magnetic field by the so called Lorentz force which is:

where the direction of the force (F) can be found using a right hand rule that we covered previously in the series. Of course what's needed now is to see how the magnetic field of a moving charge actually looks like and which mathematical equations it obeys...

The magnetic field of a moving charged particle

The magnetic field of a single point charge q that is moving with a constant velocity v is given by the equation:

where c is the speed of light!

Let's now consider two charged particles. Till now we saw that they interact (forces) because of the electric fields, which makes them attract or repel. When those charges are not moving then they don't have an magnetic field, but as soon as they move because of the electric forces they of course also start having magnetic fields. Let's consider that they have the same velocity and charge, and that they move in parallel trajectories. The forces applied to each are:

where v0 is the initial velocity of the particles (it changes after the interaction).

Supposing that the particles are both protons (positive) the two forces add up "outwards", cause they repel each other. That way the total force applied on each particle, because of the interaction with the other particle is:

But, what is more interesting is the ratio of the forces which is:

where c is of course the speed of light and so the only thing needed is the velocity of the particle. So, the electric or magnetic force can be found, when knowing the other. Something very useful, cause that way electric and magnetic fields are now "kinda" connected. A step closer to electromagnetic fields!

And this is actually it for today's post! Next time we will get into the magnetic field created by straight-line current-carrying conductors, which of cousre is another source of magnetic fields.