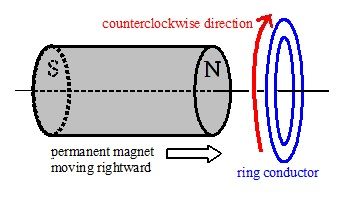 Hello it's a me again Drifter Programming! Today we continue with Electromagnetism to get into Lenz's law and also Induced Electric Fields. So, without further do, let's get straight into it!

For example when moving a permanent bar magnet through a coil of wire an electric current is induced in the coil. As we know from electric field sources, this current sets up a magnetic field around the coil, making it a magnet. Using Lenz's law we can indicate the direction of the induced current. Like poles repel each other and so when the north pole of the bar magnet is approaching the coil, the induced current flows in such a way as to make the side of the coil that is being approached a north pole too. When withdrawing the magnet again the near side of the coil becomes a south pole so that it produces an attractive force (opposite poles), which opposes the change again. 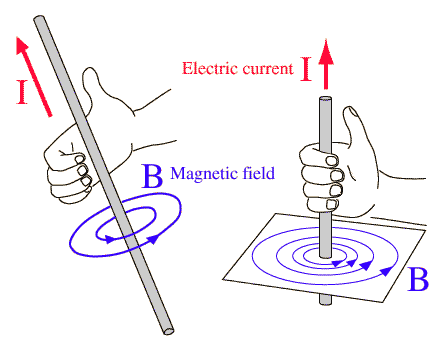 So, to summarize really quick:

The emf's that are induced in the circuit imply that some work is being done. The work done by the electric field E for each unit of charge completely around a circuit gives us the induced emf ε as:

Using this intergral Faraday's law can be written in terms of the induced electric field as:

Wait....isn't the left part always zero? Well, for Electrostatic Electric fields which are caused by fixed charge distributions we of course know that there is no net work over a closed path which means that the integral gives us zero. But something that is important to distinguish is that Induced Electric Fields don't obey this, which means that the result of the integral is non-zero and so electric potential can only be associated with electrostatic fields, but not with induced fields. Remember that induced electric fields and electrostatic fields are different from each other. An electrostatic field is produced by a static distribution of charge and determined via Coulomb's law (and Law's that are based on it). An induced electric field is a nonconservative electric field and produced by a changing magnetic field (magnetic flux).

Note that the integral form of Fraday's law is valid even if no conductor is present in the region.

Let's get into a small example. Consider a uniform magnetic field confined in a circular region with radius R, on top of a page. Suppose that the magnitude of B increases with time (dB/dT >0). Can we find the induced electric field everywhere?

The magnetic field is confined to a circular region and so for symmetry we choose the integration path to be a circle of radius r. The magnitude of the induced electric field at all points on a circle is the same and so according to Lenz's law the direction of E must be such that it would drive the induced current to produce a magnetic field that opposes the change in magnetic flux. The area vector is pointing out of the page and the magnetic flux is negative or inward. The inward magnetic flux is increasing and therefore the induced current flows in a counterclockwise motion to produce more outward flux.

which can be found easily, cause the area of the region is πr^2

cause the calculation process now contains both r and R and so R doesn't get cutoff like before...

And this is actually it for today's post! Next time in Physics we will get into Εddy currents and after that I'm thinking of getting into Maxwell equations as a whole, which might be an interesting article!