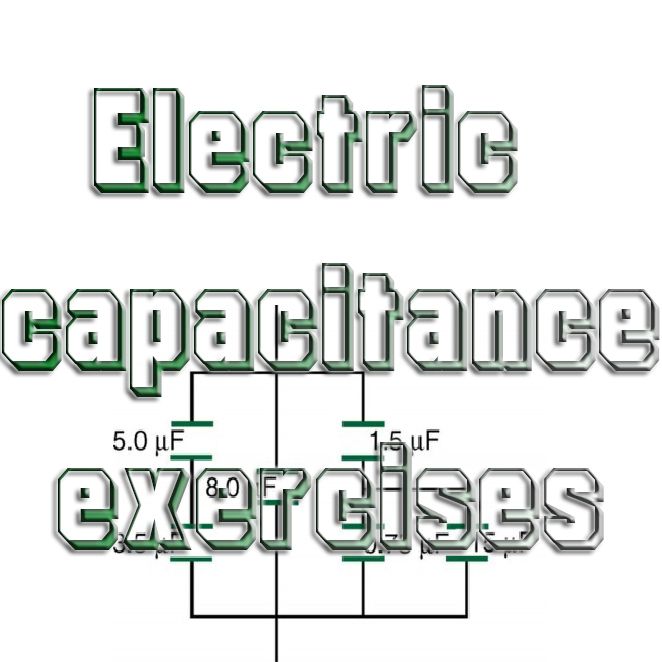 Today we continue with Electromagnetism to get into examples/exercises all around Capacitors and Capacitance that we covered during the last 4 posts!

I highly suggest you to read these 4 posts of Electromagnetism from Capacitance up to Dielectrics, cause this post will simply be an mathematical application of the topics that we discussed there...

All the mathematical equations will be drawn using quicklatex!

To make it smoother for you I will start with simple capacitor calculations, continue on with combinations, electrical energy and density, and lastly dielectrics (actually exactly the order in which we did the posts!).

Suppose we have a capacitor build up of 2 parallel conductive metal plates (like the one that we covered through-out this series) and that there is nothing in between of those plates.

The capacitance (C) of such a capacitor can be calculated using:

or using the more general equation:

Using the general equation we can calculate the potential difference like that:

Using the other equation we have:

When having parallel plates (and so capacitors) we proved that the electric field and voltage are binded by the equation:

We know the potential difference (V) and the distance (d) and so can calculate the electric field like that:

For the last bit we simply have to divide the charge (Q) with the area (A) which gives us:

In other examples we might know the voltage, area, electric field or charge density and might need to find the capacitance, charge or distance of the capacitor! Either way these are the "needed" equations for simple capacitors!

During the post about capacitor combinations and problems we solved a "simple" example, where we only had to calculate the total/equivalent capacitance of the combination. But, I also told you that the potential and charge might also be asked in some examples and so here we go!

Suppose we have the following capacitor diagram: 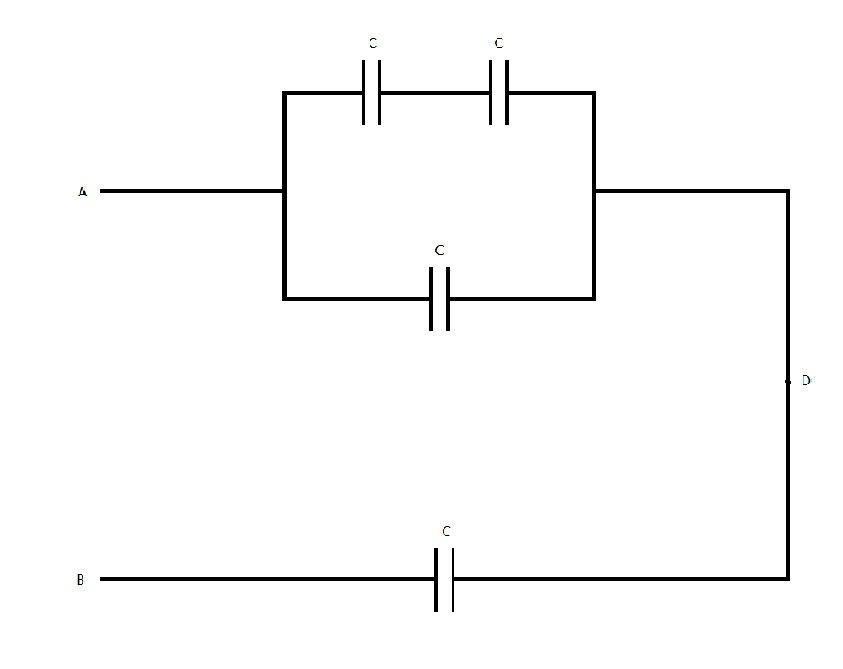 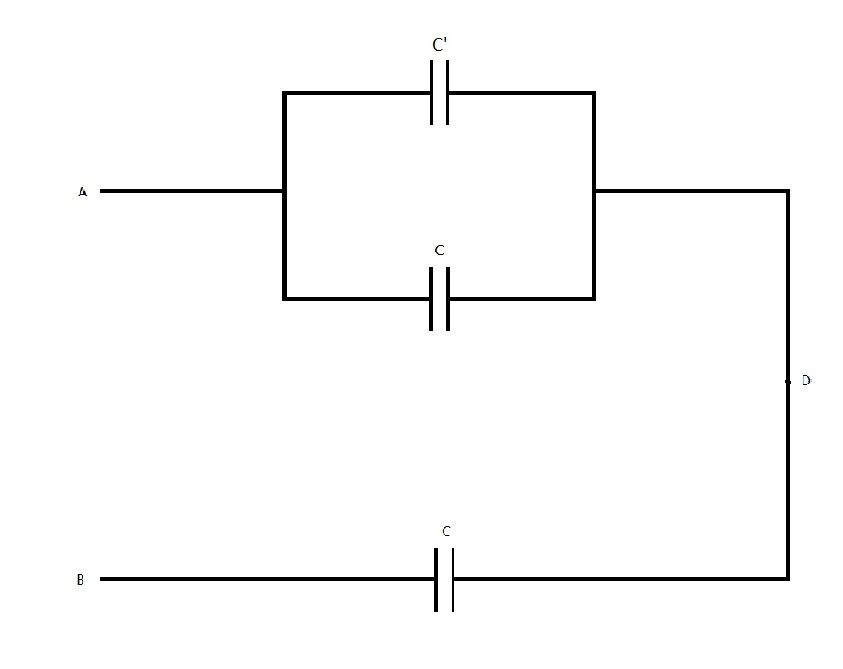 which give us a capacitance:

Next up is the parallel combination of C and C' which gives us: 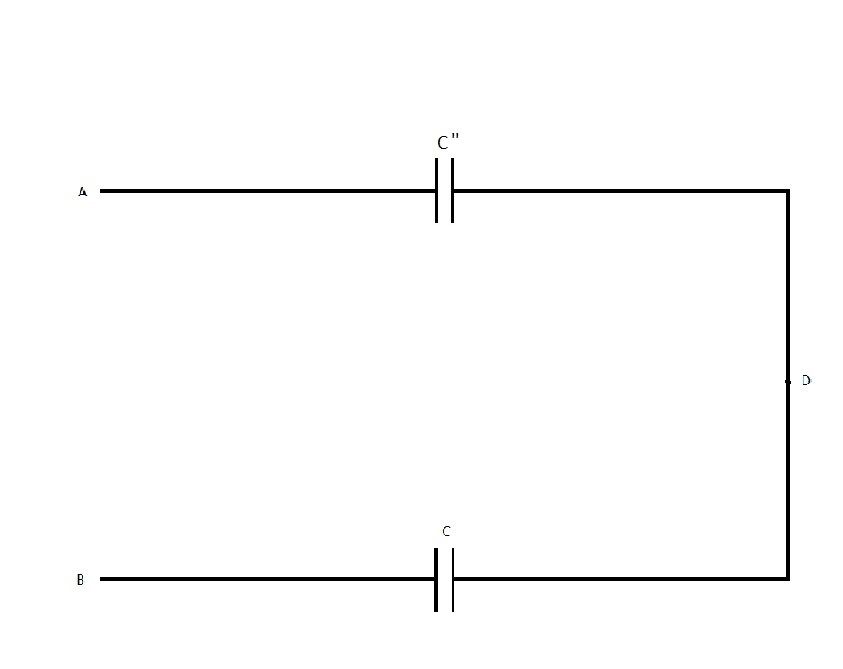 Lastly we combine C'' and C that a serially connected and get:

which gives us the total capacitance: 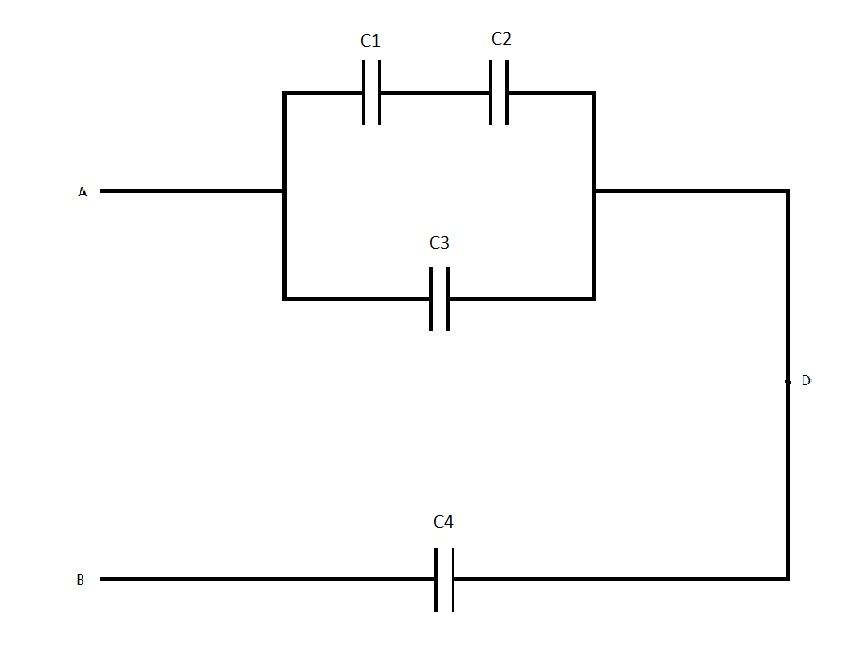 Side-note: All these diagrams are made by myself!

So, let's now get into the actual exercise "questions"...

We build up back to the original circuit...

From the last diagram we can calculate the total charge which is:

The capacitors C4 and C" in the third diagram are in a serial connection and so have the same charge, which means that the charge of C4 is equal to Q4 = 43.2μC.

The potential difference of C4 is:

When in a serial connection the potential differences add up to the total which means that:

Which of course is the potential difference A->D that we are asked to calculate in 3.

For the equivalent we have a total charge of:

Continuing on we get to the "given" diagram where C1 and C2 are in a serial connection and so have the same charge Q = Q1  = Q2 = 14.4 μC and V' = V1 + V2. Because they have the same capacitance and charge they also have the same potential difference (which is the half of V') and so:

You use this exact procedure for any combination of capacitors!

Examples in this category are applications of the equations we talked about in my post and so I will just get into representative examples of such problems.

Suppose we have a capacitor (from the ones that we covered) with:

Calculate the energy density (u) in the space between it's plates.

Because we have this "simple" capacitor we can calculate the electric field E using:

As a sub-question of other problems we might have:

What is the electric potential energy (or internal energy) stored in a capacitor C with capacitance C = 300μF and potential difference V = 240V?

We simply check what is given to us and use the correct equation of the following:

Of course C and V are known and so we use the "middle" one which gives us:

How much energy is consumed if the capacitor gets totally discharged when connecting it to a conductive cable, supposing that all his energy is turned into thermal energy.

Let's get into some examples where we have to calculate one of the "elements" of a capacitor that contains a dielectric material.

Let's suppose we have a capacitor (from the parallel plate ones) which has an dielectric material of dielectric constant K = 3.4 and dielectric strength 2 x 10^7 V/m. The capacitor needs to have a capacitance of C = 1.5nF and should withstand a total of 6000V of potential.

What is the minimum area (A) that each capacitor plate should have?

For such a capacitor we can use the equation:

You can see that d and A are unknown and so what now?

Well, with minimum A we mean smallest possible d, where d is of course limited by the dielectric strength.

Using E = V/d we can calculate this distance:

That way the Area is now the only unknown variable and can be calculated with ease...

Suppose a capacitor where when there is no dielectric material the electric field is:

When having a dielectric material throughout the "empty" space then the electric field is:

The questions can be done in the opposite order!

We said that the factor in which the electric field decreases when insterting a dielectric material is equal to the dielectric constant K.

Last time we talked about the relation between the charge density of the plates and the dielectric material and got the equation:

The charge density at first is given by:

and so we finally have a charge density in the dielectric which is:

Next time we will start talking about electric currents!