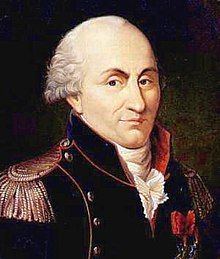 After the quick introduction to this new Physics branch called Electromagnetism we continue on talking about a law that describes those electric interactions.

Today's post is all about Coulomb's law and some examples/applications of it.

Coulomb was an scientist that studied the forces and interactions between charged objects.

Doing a lot of experiments he found the mathematical equation of the Electrostatic Force between two point charges q1 and q2 that have a distance r.

The force F is equal to:

where k is the Coulomb constant that depends on the metrics that we are using.

Because of Newton's 3rd law we know that each force (action) has an equal, opposite reaction.

The actual electric charge is calculated in Coulomb's (C) in SI.

You can read about it here in wikipedia.

Coulomb's law covers the interaction between two point charges, but what about 3, 4 or more?

Well, the same way as we "added" forces in Classical Mechanics when having Friction, Gravity etc. to get the component vector for each axis, we again can do the same for electrostatic forces!

This will also be used in more advanced "Object-Physics" that we will get to later on...

When two point charges apply a force to a third point, the total force asked to it will be the vector addition of those forces, like if they applied each force on their own.

This important property is a cause of the superposition principle, and it can be applied for any number of charges!

Depending on the "environment" we have to use an specific Coulomb constant each time.

When in a vacuum this constant is approximately equal to:

This is the value that we will mostly use...

The Coulomb constant is given by the equation:

where ε0 is the electric constant of "vacuum permittivity".

Later on in Optical Physics (and other branches) we will also use a constant that depends on the speed of light...

Anyway the actual equation of Coulomb's law now after all this is:

How to solve problems around Coulomb's law

Let's now get into some examples that use this Law!

Suppose two point charges that are on top of the positive x-axis.

Calculate the total force applied of those two charges (q1 and q2) to a third charge q3 = 5nC at the center of the axes.

Because of the superposition principle we know that the total force will be equal to the vector addition of those two forces.

First we have to convert the nano-Coulomb's (nC) to Coulomb's (C)and the centi-meters (cm) to meters (m):

Let's now calculate each force alone and then do the vector addition: 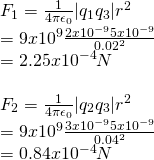 There are no components in the y and z axes and so the total force will repel q3 to the left.

Suppose two point charges with charge q = 2μC and that they interact with an third charge with charge Q = 4μC.

Find the meter and direction of the total force applied to Q using the diagram: 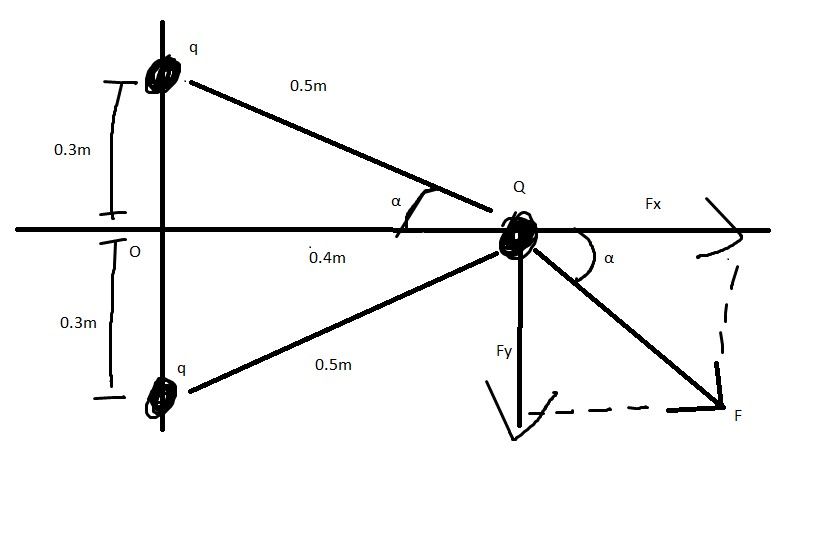 which shows the force applied of the upper charge...

You can clearly see that we now have an angle and so will have component vectors for each axis (x and y). But, because the distances and charges are equal we can use the same equation to calculate the force applied from any of the two objects in value.

The metrics are right except the charge which has to be converted to Coulomb's.

So, because of Coulomb's law the force applied is:

Which means that each charge q applies a force of 0.29N to Q.

Of course the charge on the bottom applies a force with the same meter, but opposite direction in the y-axis and so they cancel each other out which means that the total force on each axis is:

And so the total force applied to Q is going to the +x direction and has a meter 0.46N.

When there is a force on more then one axis then we also have to give the angle (or tangent) between each component.

So, if there still was a force on the y-axis we would also say:

And this is actually it for today's topic and I hope that you enjoyed it!

Next time we will get into Electric fields and forces!