I was shocked when I heard about this! It made me think of the raids during prohibition and gang warfare in the 1920's USA.
But what we are dealing with here are young people at a rave! It was organized to commemorate Steve Caniço: The rave had originally been set up in memory of a young man killed in the nearby city Nantes two years ago during the annual nationwide celebration Fete de la Musique (link to the French Corona rules regarding such gatherings). 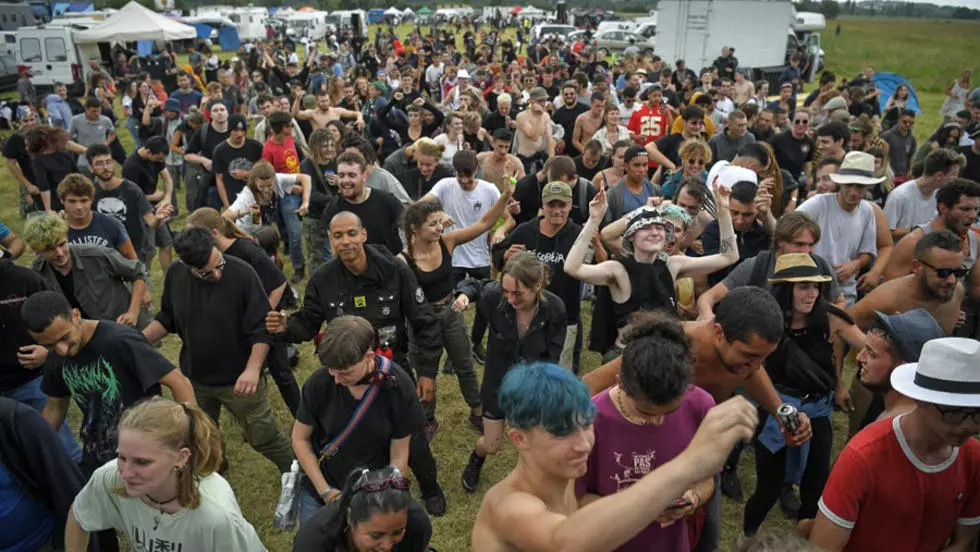 Of course, this is the 'official' version in this article, from the view of the police. Does it justify this sort of brutal attack, including destruction of what appears to be hundred thousand € worth of equipment?
Here a few select quotes, but I urge to read the whole article:

Eleven police officers were injured in western France on Saturday as they broke up a 1,500-strong illegal rave with one party-goer losing a hand in the clashes.
Police fired teargas to disperse the crowd, who defied an 11:00 pm coronavirus curfew on Friday and stayed on well into Saturday afternoon in the area around a racecourse near Redon in Brittany. "There were very violent clashes when 400 police intervened," said police prefect Emmanuel Berthier, adding the violence lasted more than seven hours through the night.Police detained five men and opened an inquiry into violence against people in positions of public authority.
By 5pm Saturday, the rave was finally shut down as the sound system and loudspeakers were reportedly destroyed by the police.

In memory of Steve Caniço
The rave had originally been set up in memory of a young man killed in the nearby city Nantes two years ago during the annual nationwide Fete de la Musique celebration. Prosecutors said Friday that Steve Maia Caniço fell into the Loire river when police moved in to break up the gathering. His body was found more than a month later and protesters in Nantes have demanded "Justice for Steve", saying the police intervention was disproportionate. Hundreds of people flouted France's coronavirus curfew with underground parties near Dijon and a village in western Brittany, while police managed to prevent organizers from staging a major rave in Paris.

From a different perspective:

“Unheard of”… Why did the gendarmes destroy the equipment of the party-fighters with ax?

The pictures speak for themselves. Mobile gendarmerie units surround arbors where amplifiers, computers and loudspeakers are stored. With an ax or a sledgehammer, the police destroy sound equipment while others cut the canvases of the arbors with a cutter. This scene took place on Saturday afternoon in Redon, in Ille-et-Vilaine, where a teknival had been organized since Friday evening. 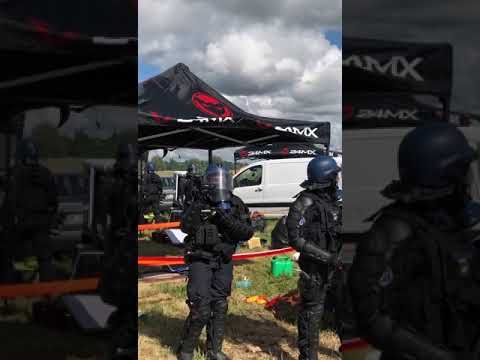 The text beneath this video, translated from French:
Outlaw police in France
SUPPORT FOR THE TEKNIVAL OF FORBIDDEN MUSIC
The hand of a 22-year-old torn off, 7 hours of non-stop violence, thousands of tear gas pucks, hundreds of stun grenades and other defensive bullets thrown at young people in shorts and t-shirts who came to have fun. This is the result of the intervention of the police to try to prevent the party in tribute to Steve. Two years after his death, nothing has changed.
After this outburst of violence, the vengeful madness of the military could have stopped, but no. After giving the revelers a few hours of respite, an intervention of rare violence occurs. This time it is the musical instruments of the sound systems which will be taken to task.
With axes, maces, hammers and batons, the gendarmes destroy everything in their path.
Thousands of euros of material are illegally destroyed. The moral and financial damage to the workers is immense. The cries of despair that can be heard in the videos of these moments are tragic proof of the violence of the facts. These young people who will have spent years saving to be able to obtain the means to express their artistic talents will see their efforts reduced to dust in a few tens of minutes.
TO SUPPORT SOUND SYSTEMS IN THIS TRAGIC TRIAL, TO END POLICE IMPUNITY, TO BE ABLE TO MAKE A COMPLAINT AGAINST THE GOVERNMENT ABOUT THESE EXACTIONS, MAKE A DONATION!
LINK OF THE CAGNOTTE TO SHARE BY MASS: https://www.helloasso.com/associations/fonds-de-soutien-juridique-des-sons/formulaires/4/en 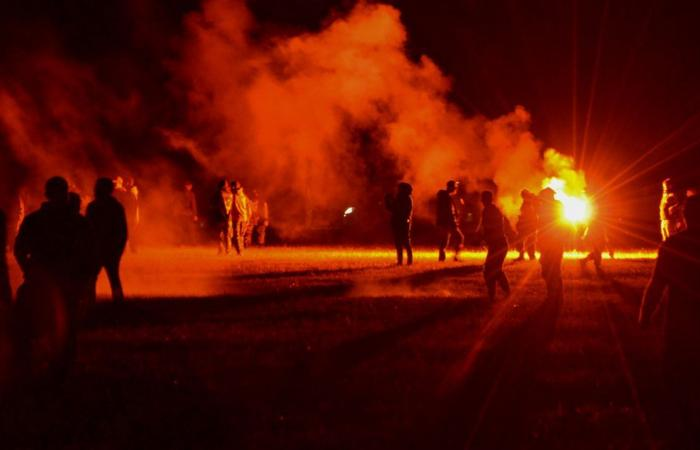 could the gendarmes legally destroy the equipment of the party-fighters? – Release

It was later that day on Saturday that the gendarmes stormed, around 5 p.m. An intervention that lasted less than an hour. “They arrived very suddenly, the first tear gas was launched when the sound was still turning”, tell CheckNews Victor Lacroix, president of the Media’son cultural association. The latter, present at the rave, broadcast the intervention live on the Media’son Facebook page.

Note: I searched (and found) the respective links in the above quote, which were not supplied in that article. It would however be of interest to check out the Facebook page linked to above, some very interesting details are posted - I just quote one below:

INFORMATION
The ARS rescue in Ille-et-Vilaine has been intentionally kept away from this afternoon's mobile police intervention. The access corridor request has been blocked by Prefect Emmanuel Berthier.
The corridor, part of the red axis, has been deliberately blocked for delaying the arrival of relief workers. The severity of injuries sustained by those present on the site has therefore been raised.
Just like the ban on access to the site for journalists, this has reduced the number of witnesses to this more than controversial intervention. The misinformation spread by some media outlets is thus harder to deny.
In addition to an irresponsible decision coming from the prefect, he wanted to hide the facts from the public.

Does the French police act like this even at home, in their own station?

this seems to be a legitimate question, in view of what went on at that rave!

Anger, amazement and disgust. Two days after the party which brought together around 1,500 people on Friday evening in Redon, some revelers have retained the scars of this night of celebration. The features under the eyes are marked by lack of sleep. A man in his 20s is still hospitalized after losing his hand in nightly clashes on Friday night. Beyond the men and women, it is also the material that has suffered from this supposedly festive weekend. On Saturday, the gendarmes decided to destroy part of it, without anyone really understanding why. “We had no dialogue. The only goal was to destroy. I’ve never seen that. Neither in France, nor even in Europe, ”regrets Victor Lacroix, representative of the Media’Son association. ” It’s a shame. It’s incredibly violent just for people dancing, ”adds another participant. The damage is difficult to establish but could amount to between 100,000 and 200,000 euros. Equipment such as generators had even been rented from certain brands in the region.
Source 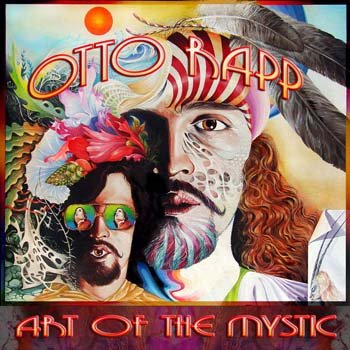 PRINTS OF MY ARTWORK AVAILABLE HERE: 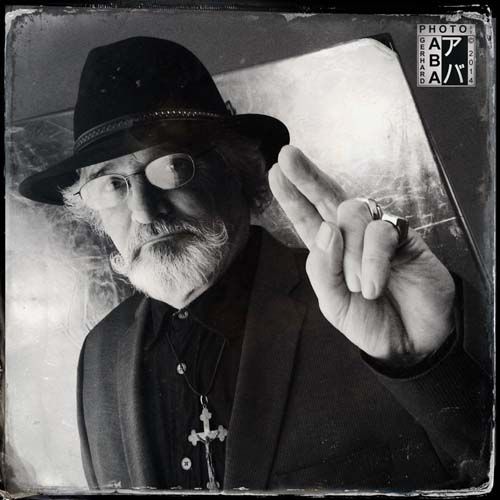 I hope we can excorcise all this and return to normal (photo by my friend Gerhard Aba)
If you find this useful, please repost!
MY INTRODUCTION - ABOUT MY WORK

should you not be on the blockchain, or have no upvote power, or this post is already older than 7 days, you can always just buy me a coffee.