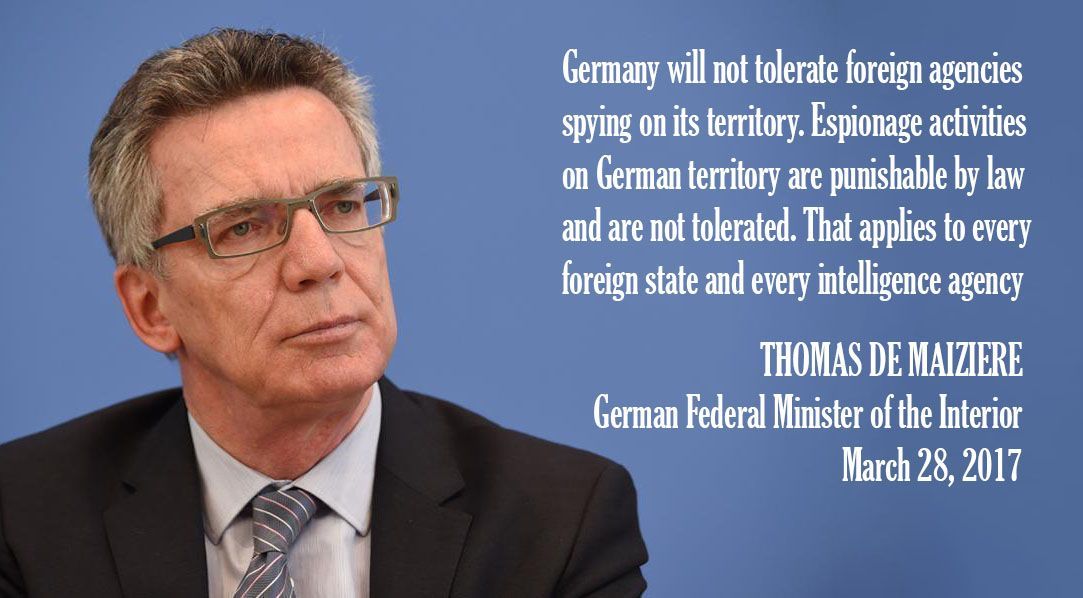 There’s ongoing spat between EU and Turkey. Latest accusations about Erdogan’s agents are spying on supporters of exiled preacher Fethullah Gulen open new front in the diplomatic row between the two countries. But there is more to this story…

German prosecutors have announced an investigation into claims that Turkish agents are spying on alleged followers of exiled preacher Fethullah Gulen in Germany after Thomas De Maiziere, German Minister of Interior accused Turkey of “intolerable and unacceptable” espionage against supporters of Gulen:

Germany Refuses Turkey’s Request to Spy on Opponents of Erdogan

Mar 28 2017
Germany will not tolerate foreign agencies spying on its territory. Espionage activities on German territory are punishable by law and are not tolerated. That applies to every foreign state and every intelligence agency. We have already told Turkey several times that such things don’t work. Independently of how one stands on the Gulen movement, it is German law which applies here and citizens who live here are not spied on here by foreign agencies.

You may think man has overslept most interesting events on German political stage, like those from 2013:

According to SPIEGEL research, United States intelligence agencies have not only targeted Chancellor Angela Merkel's cellphone, but they have also used the American Embassy in Berlin as a listening station.

But you would be wrong, because Maizière is one of only three ministers to have continuously served in Chancellor Angela Merkel's cabinets since she took office in 2005.

Together with Ursula von der Leyen, he has been widely looked on as a possible future successor to Merkel. So he couldn’t be completely ignorant. As a matter of fact, he has even made a statement in that affair:

And now, if you really want a laugh, find his twitter account and ask him where were German prosecutors back then? How will he punish US and its intelligence agencies for ransacking of German “intelligence virginity”. If that one ever existed:

Germany's foreign intelligence agency, the BND, apparently spied on large numbers of foreign journalists overseas over the course of several years, including employees of the BBC, Reuters and the New York Times. Critics see a massive violation of press freedoms.

What a prove that suit does not make a man… nor a clown.