A lot of my friends think I have been mushroom hunting for years, because I can identify mushrooms and plants pretty well. The truth is, it's only the ones I do know very well. I keep away from stuff I don't know. Isn't there so much more we all don't know? I can't stop but being a really curious person and to be honest I only discovered mushroom hunting last year. I am very new to this, but so extremely passionate about it!

In my previous post on mushroom hunting during spring this year titled "St. George's Mushroom", I find Calocybe Gambosa.

I learned by eating various specimens, that it's best harvested when it gets really big. The taste and texture improves only when it really matures. It's also nice to dehydrate it. They literally smell like spring.

This time i'd like to share a find I made with @tandava over a period of time while crossing a path that always yielded some xerocomellus chrysenteron aka formerly Boletus chrysenteron from the Boletaceae genus.

Citizens of the Hive!

If you had the chance to read my take on the The Biophilia Effect in my post on Forest Medicine, then you know there are more health benefits in visiting your local tree families than finding medicinal plants to forage there. The healing power within forests and SHINRIN-YOKU can be beneficial to anyone. Regular walks in the woods can do much more than just enliven your spirits. The lessons learned in the past few months, make me sneak around the woods carefully, not to disturb or harm any flowers, insects and respect the places I hunt my mushrooms at in a mindful manner. Apart from the alpha-Pinene/α-Pinene and the positive effects from all the terpenes that tune me into a parasympathetic state of trance, feeling like a strange herbivorous mushroom hunting vegan mammal, I truly feel welcomed by nature. I believe so will you, when you enter the woods with a mind state that it may bring you healing, joy, wisdom and safety. So tune your antenna next time you go for a walk. It works! It surely brings me back to that jungle mind state my ancestors must have been so in-tuned to...

Close to Spruce trees or the Genus Picea is where I regularly encountered this strange specimen of Boletus, which now has it's own Genus of xerocomellus of the Boletaceae. I happen to come across these quite often, apart from other recent more rare finds I made of Hericium, that grows on dead or dying wood and Grifola Frondosa or Maitake, to which I will surely elaborate more in other upcoming posts. As I am always learning and only at a beginners stage, i'd like to take you with me on my journey. I am currently learning to identify the Boletus genus and newly learned how to identify some Russula. I shall share my findings here. I actually came across a number of strange and giant mushroom from the boletus genus before and thought they were edible. I actually even dehydrated these Caloboletus radicans . They had a really delicious smell to them. Almost spicy and oriental. I remember that I actually thought it was the find of the year. One after another under this tree next to a parking at the side of a road. I could not believe my eyes. They were everywhere I looked. Two grown together even. Looking at them with greedy eyes, I quickly looked around to see if anyone was watching when I picked them up and filled my bags. I mean, how can this be? All for me?

I was actually on my way to a mushroom hunt that day and this literally happened 7 min from my place after a lot of rains and storms a few days prior. And they were huge! I mean, I didn't have to exaggerate?

So I found quite a few and wanted to cut and dehydrate them. I thought they were from the Boletus family and that all Boletus genus mushrooms were edible.

Firstly when I cut them and they stained blueish. I thought that was strange. I had never seen this except with the Neoboletus luridiformis, which is edible and becomes blue while cutting too. I then took a bit in my mouth to check. It was bitter! I then searched online and found out that I had stumbled across a Caloboletus radicans. I thought I might still be able to eat it. An article I stumbled across stated that it can cause severe vomiting and diarrhoea when eaten. So I had picked about 10KGS of inedible mushrooms. i don't think that this would have been that bad if the mushroom is well cooked, but then again. It's really bitter and doesn't taste as good as it smells.

A friend who has been foraging explained to me later how to identify a few important boletus mushrooms and how. I still have to get the hang of it. He said that at times one even needs a microscope to see the structure that gives the exact specimen away. Most expert mycologists only know about 1500 out of 5000 mushroom species and the space is currently evolving due to computational analyses, gene sequencing and molecular phylogenetic data.

I'd like to mention that I am very careful when eating a mushroom and that this particular incident was a great lesson for me not to indulge into my euphoria too much. Given the situation, I think I must have just thought these were Boletus edulis

Important to mention here, is that one should surely watch out for the Rubroboletus satanas and make sure not to mistake that one for an edible as well. Although I think one would survive eating it, I think one would get deterred by the smell. I would always suggest to smell a mushroom and look for a note of Anise (Pimpinella anisum).

I also stumbled across a Bitter Bolete (Tylopilus felleus) once: White spores that turn pinker when mature. This one doesn't bruise blue. When you see the white, just taste a bit and check if it's bitter. Then spit out the piece you bit. Notice the dark brown netting texture on the stem. This texture may stain olive brown. 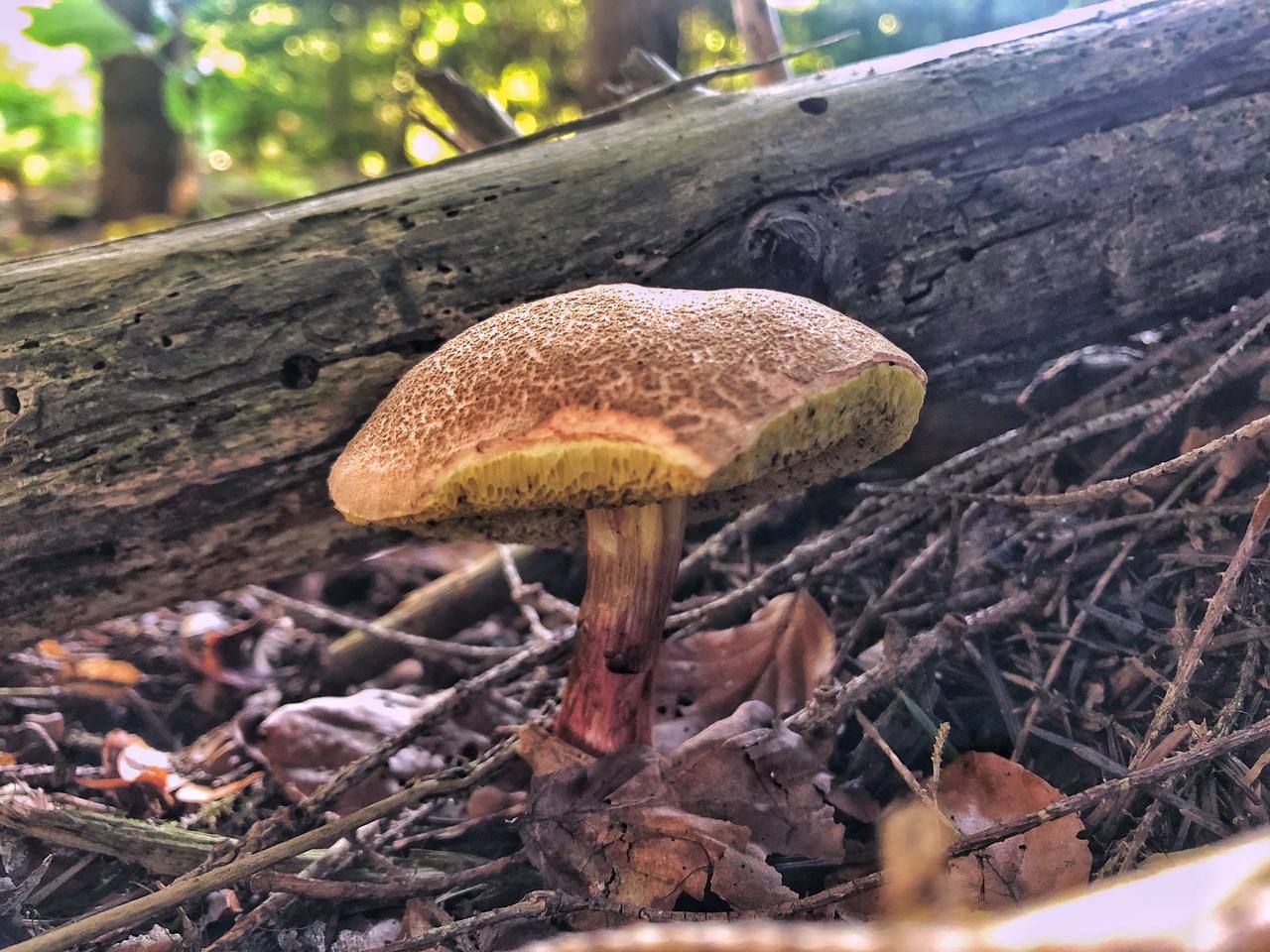 The xerocomellus crysenteron translates to german as Rotfussröhrling. Because of it's red colored stipe/stem.It's a very commonly found mushroom here in Switzerland.

The stem has a stick of rhubarb color. The tubes are lemon yellow, hence an other name for it, the Red Cracking Bolete. Slugs often get a hold of this mushroom and eat the cap that then shows a bit of red. The structure of the stem are overlaid red fibre. The yellowish stem has red dotted streaks or areas. The red dotted is important as the texture defines it as well. The spores are yellow but turn olive brown in time. Since they rot quickly, we only took back a few. The mushroom is great to dehydrate. Since I had already planned something and made a dough, guess what we made too? 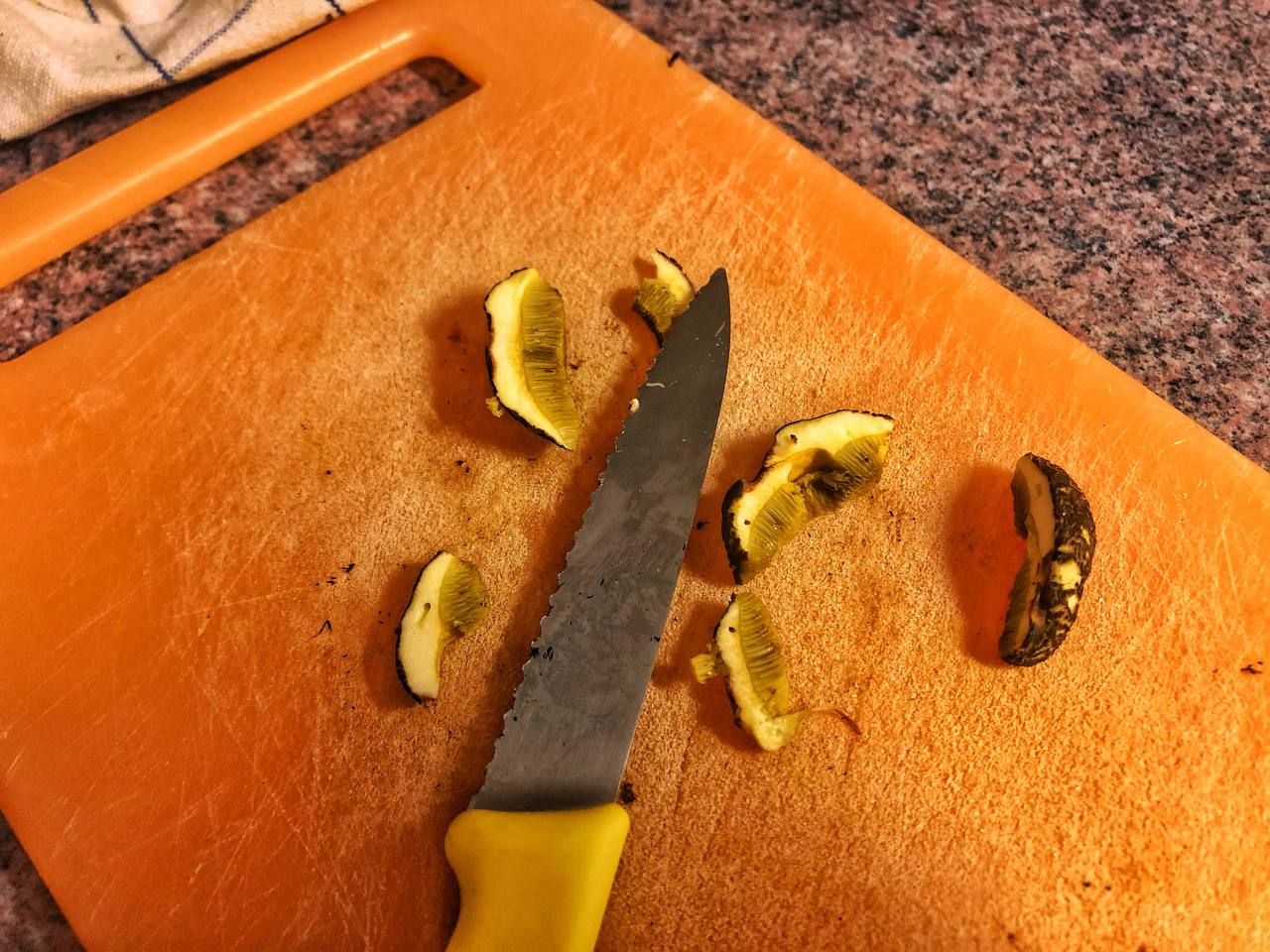 In German the word cheese isn't used anymore for vegans to describe cheese they can eat. Instead they use the word "Schmelz" which means melt. I think that I would use this word for pizza occasionally. I mean melt. lol

I wonder if I can make grains melt on pizza?

Sounds really cool! A xerocomellus crysenteron pizza. Like out of an interstellar pizza delivery menu.

So did the habitat look like where I got em. - An alien Planet.

Mushroom fruiting bodies have polysaccharides that regulate gut microbiota and hence increase your immune system. Some Mycorrhiza and Saprotrophic fungi positively affect our brain via the gut brain axis through the vagus nerve. Apart from improved immune regulation and reduction in pathogens as well as factors that controls intestinal homeostasis in healthy individuals, the intake of certain edible mushrooms and their polysaccharides helps to stimulate the growth of beneficial microorganisms. The favorable effects on short chain fatty acids (SCFAs) productivity from mushroom polysaccharides in intestines has been exemplified in numerous recent scientific papers. If you are looking for a way to reduce pathogens by enhancing the human gut microbiota, the microbiome, here's a way!

Here are all my previous recipes, in case you feel like trying something else:

'I hate, therefore I love; I stopped, therefore I decided to make a choice. Hold that frame and empower yourself as you can choose the path you shall embark on. All degrees of the same. So is desire or not.' - @yangyanje