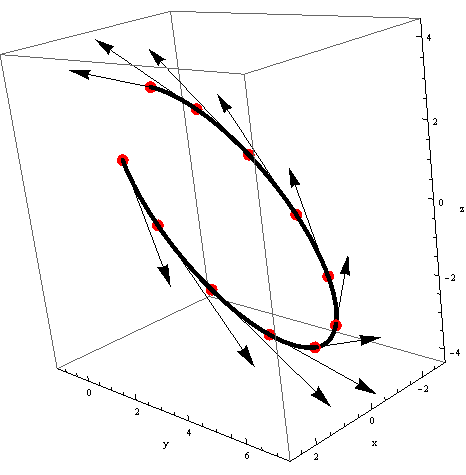 Hello it's a me again drifter1!

As I already said last time, Directional Derivatives are used for finding normal vectors to a plane and also for finding tangent planes.

There is not much more to say about, so let's get started!

Last time we talked about Derivatives of vector functions (curves) on top of planes.

We can see that we use the rule of composition, because those functions are "complex".

The function f(x, y) is a function of x and y, but x(t) and y(t) are functions of t. This means that we first partially differentiate f(x, y) by x or y and multiply this with the derivative of x(t) or y(t) with t.

Of course the derivative along a curve can also be found for 3 or even more dimensions...

The derivative along the curve is:

The tangent vector of the curve r is:

The gradient of f (or Del of f) is the vector:

So, the derivative along the curve is:

is called the derivative of f along the direction of u = (a, b, c).

The given vector u is not an unit vector and so we have to convert it.

The gradient of f is:

For the point P we have:

And ε is a line that passes through P0, is parallel to u and has the parametric equations:

Which of course is the derivative of f along the direction of u.

where φ is the angle between the vectors ∇f(P0) and u.

This is clearly a "dot" product between vectors...

Depending on the angle we have the following cases:

Normal vectors to a plane

So, now after all that we can finally get into the actual useful thing of this post...

By using this concept, planes/surfaces of the form:

the equation of a tangent plane is:

And finally the equation of such a tangent plane is:

Next time we will start getting into double/surface integrals!