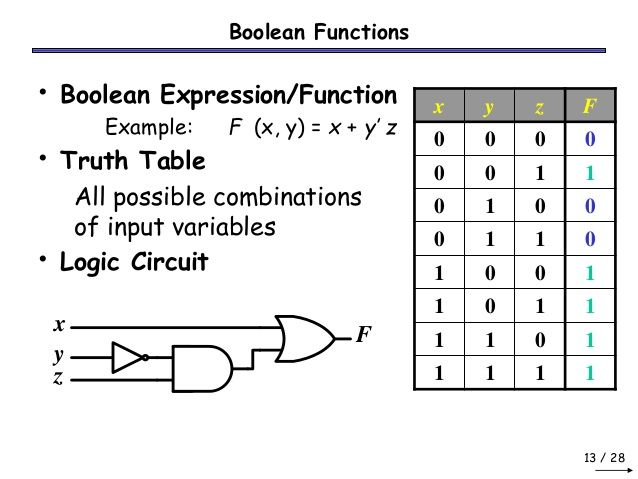 Hello its me again. Today we continue our talk with Logical (Boolean) Functions. I will talk about different ways of representing a Logical Circuit using Boolean Expressions-Functions and Truth Tables (Circuits/Gates will come some posts later!). I will also show you how to get an Boolean Function from an Truth Table using Minterms and Maxterms (next 2 posts we will talk about simplifing this function). So, without further do. Let's get started!

Boolean Functions/Expressions are used for Logical Circuits. We use an Mathematical Representation of the Inputs and Outputs of an Logical Circuit to get Output values for each different value of Input, without the need of testing it on real hardware. It is much easier to have a function that we can afterwards translate into an Circuit then creating a Circuit directly, cause we would have to test each value by ourself.

The values that such an function can get are binary numbers. So, we can only have 0 or 1, cause an Circuit can only have low and high voltage readings, as we already said last time. So, we will write an Mathematical Expression that contains those Inputs and does Boolean Algebra (next post) to them, to get an specific Output.

where x, y, ... are the Variables/Inputs and F is the output that comes when putting those Inputs into the Boolean Function F

can be represented as a Boolean Function like that:

Things that apply to an Boolean Function are:

In the same way as we use Logical/Boolean Functions, we also use Truth Tables. An Truth Table contains all different kinds of Inputs and the Outputs an Circuit gives. We can go from a Truth Table to a Boolean Function using the easy Minterm and Maxterm way,  Karnaugh Maps and the Quine McCluskey Method (the first one comes some posts later, the second one much later on), and the opposite can by done easily simply putting the Input values into the Function and writing the Output in the Truth Table or testing all Inputs directly on an Circuit that implements the Function. 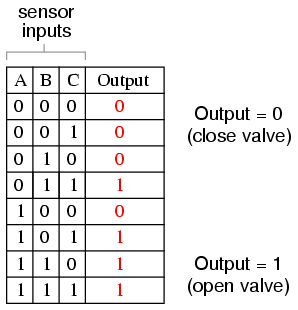 As you can imagine already:

So, some pretty easy rules that apply are:

An easy way of getting the Circuit Boolean Function from an Truth Table is using the Minterms and Maxterms we talked about. We will insert/insert not depending on the Output Value and the "way" (minterm or maxterm) we use for doing it.

We write down a sum of minterms, having the row's output where the minterm appears have a value of 1.

So, the Truth Table I had before has an Boolean Function that looks like this:

We write down a product of maxterms, having the row's output where the maxterms appears have a value of 0.

This is the end of today's post! Hope you enjoyed it!

Next time we will get into Boolean Algebra and Simplification Theorems that apply to Boolean Functions. That way we will learn to simplify Functions using the way I showed you today, applying those newly learned Theorems that will  make our boolean function smaller, so that we then create simple logical circuits! And the post next to that, will be about the Karnaugh Map way of getting an already simplified function!