We've been pretty busy preparing for SteemFest, releasing the SMT testnet, and wrapping up the MVP of Communities, but don't think we forgot about The Steemit Podcast.

We were super excited to interview the Head of Financial Relations for IOTA, Dan Simerman. IOTA is the first open-source distributed ledger that is being built to power the future of the Internet of Things with fee-less micro-transactions and data integrity for machines.

In this 20 minute interview, Dan and our Head of Communications, @andrarchy, discuss a wide range of issues like their solution to the Trilema (Coordicide), their work to establish IOTA as an open standard, how Dan thinks about IOTA from a marketing perspective, and the surprising parallels between IOTA and Steem. 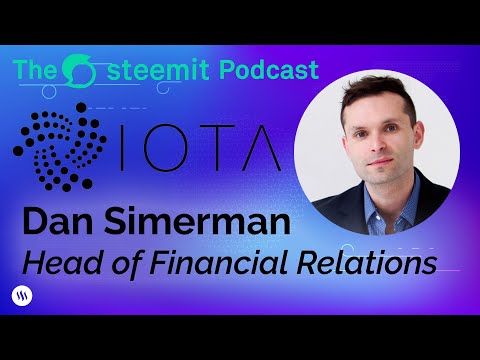 One thing to note is that in the interview @andrarchy talks about SMTs being released "very soon." To clarify, he's referring to the release of SMTs on a testnet which occurred almost two weeks ago. This interview was recorded prior to that release.