Whenever you see corporate media jump as a pack at some story, you have to ask yourself — what are they trying to hide?

I was surprised to see a reaction of the most of alternative media, which swallow hook, line and sinker, going for the corporate media narrative about Trump: Did he do it, why he do or didn’t do it, and why Dems are insisting on such a stupid story when he didn’t do it. Also, a “deeper thinkers” asked “What are they trying to gain? The affair will only help Trump!”

Well, Dems (who are not left at all — they are just another extreme right under the corporate control, but with a “liberal” narrative) know that this move will not bring them any political gains, nor they are searching for one. If they wanted to defeat Trump, they could simply let Bernie Sanders or Tulsi Gabbard to destroy him. But since both parties and Trump are the property of 1%, it is really irrelevant (from their viewpoint) who will be in the office. The aim of this move was the same as the “Russiagate” hoax — protection of the corrupt top, which means control, of the Democratic Party.

And while the “Russiagate” was launched to hide the obvious criminal acts from the Clinton campaign and “Clinton Foundation”, Pelosi's Impeachment bluff hides real Ukraine story: Alex Christoforou and Alexander Mercouris from “The Duran” will reveal a story about CrowdStrike, Soros & Hillary servers in Kiev, and many more details never heard in the corporate media. Joe Biden and his overt blackmail of the Ukraininan leadership in a bid to prevent “Burisma” (and Hunter Biden) investigation initiated by the former Ukrainian Prosecutor General Viktor Shokin, is just the beginning of the story… 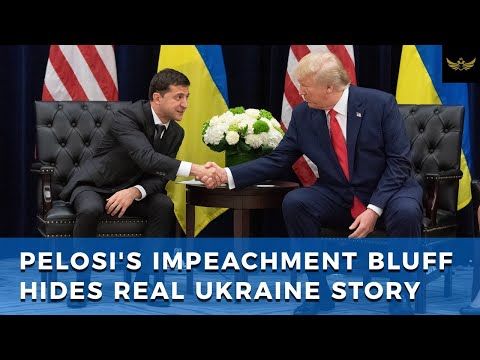 This Impeachment hoax is aimed to cover even worse affair of criminal and corruption that took part through Ukraine. Because, in Biden’s bragging on extortion, Barack Obama was also implicated, as it can be seen from the video which you can check with our @leecamp. I suggest that you watch the whole show, but if you do not have patience, just pull to 10:22…

But even that is not the whole story. When readers of this text start asking how is it possible that FBI couldn’t get Clinton’s server for investigation, and how did it get to Ukraine — why Crowdstrike didn’t get it to FBI — then they will start to ask about other things also. For example: About former U.S. ambassador in Ukraine, Marie Yovanovitch, who has been recalled in May after the affair where she was exposed giving a list of persons excluded from the criminal prosecution to the (now also former) Prosecutor General Yuriy Lutsenko, who stepped down on August 29th, 2019. Or the affair with Kurt Volker, United States Special Representative for Ukraine, who had to resign as a “colateral gain” after the Impeachment hoax. And now we will probably have some more chance to get an answer about the responsibles for Odessa massacre and also MH17 tragedy where U.S. was using all its influence to protect the real culprits — Ukraine and itself.

The hank began to unwind. Does anybody of you see any outcome that can be favorable for Dems?