Clown of the Month: Marco Rubio

Rarely someone makes a fool of himself so convincingly that he simply sweeps very sharp competition, like Marco Rubio did it in a course of just two weeks…

Two weeks after, even “The New York Times” show the video which was known long ago thanks to alternate media, and where it can be clearly seen that US-backed opposition members have thrown Molotov cocktail at aid truck.

The trivial thing like the truth, would never stop “Little Marco” to show how sick and derranged psycho he can be. He immediately started threatening to the Venezuelan President Nicolas Maduro, sending the tweets with pictures of the executed leaders of Romania, Nicolae and Elena Causesku… …and Libya, Muammar Al Gaddafi, which immediatelly triggered a reaction: Yes, that’s him, a “follower of Christ”: 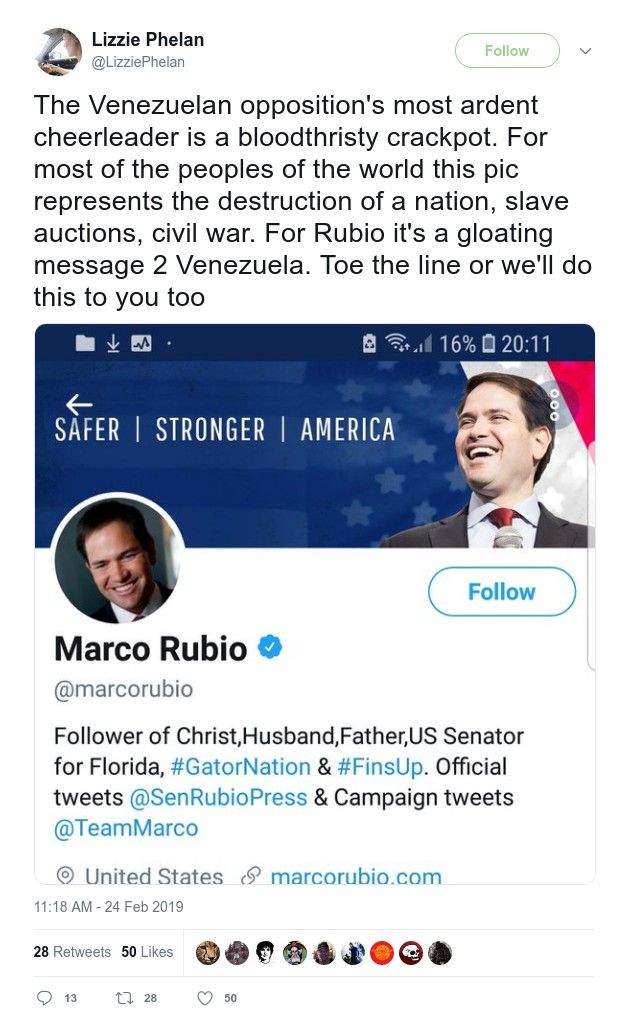 Strangely, I can’t remember Christ ever send a death threats to anybody. 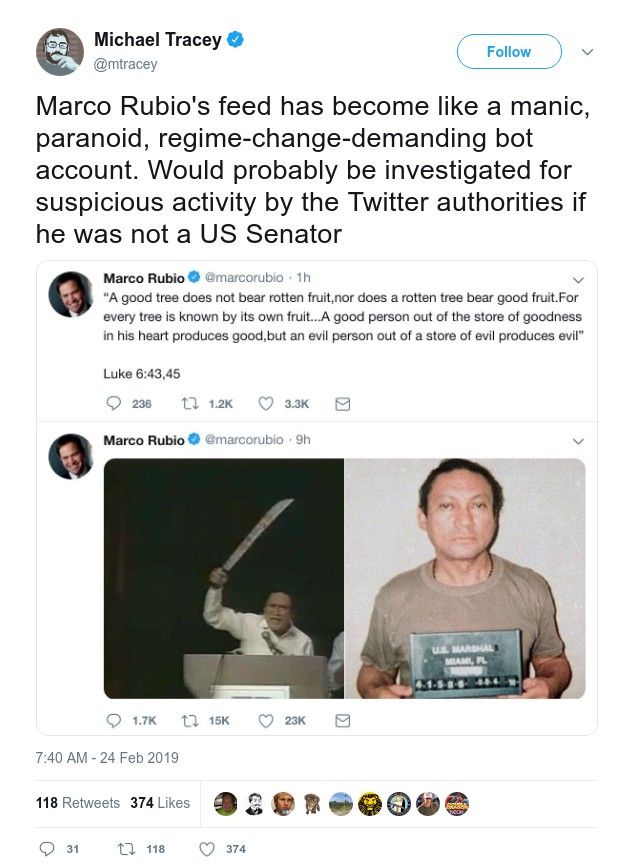 As every aspiring little fascist, Marco Rubio does not care about the Charter of the United Nations, which forbids threats in international relations:

Article 2
The Organization and its Members, in pursuit of the Purposes stated in Article 1, shall act in accordance with the following Principles. 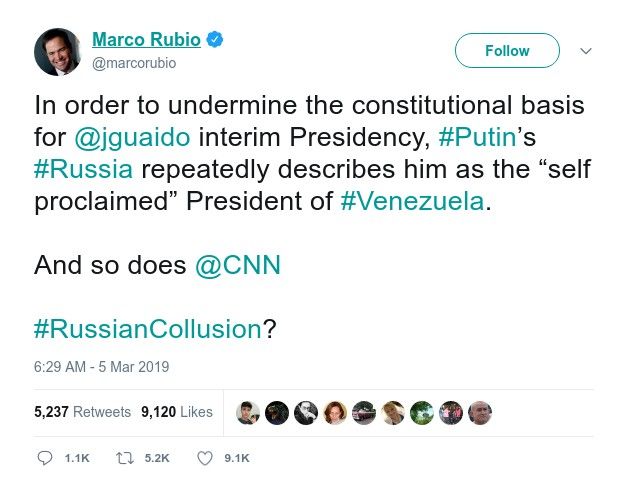 Now, if you thought he cannot get more stupid than this, you are wrong. His “capabilities” are enormous. On March 9th, after the successful U.S. cyber-attack at the electrical grid of Venezuela, Rubio gloated over the suffernigs of Venezuelan people with the following tweet:

Today another transformer explosion at the German Dam in Bolivar State caused another massive blackout.

The result? Critically ill patients have died, the #Caracas metro remains out of service & few if any flights have arrived at or departed from Caracas in over 20 hours.

Only one problem with this uneducated lying thug: “German Dam”, by that name or “nationality” does not exist anywhere in Bolivar State or any other part of Venezuela. That was so stupid that even Marco Rubio had to delete the inciminating tweet… but since this is Internet, he couldn’t hide it — we have a response from the reporter, Germán Dam, who sent the news: And now, Marco Rubio is a star at the social media mockery department. But don’t expect he will stop here. There are people whose whole life is a lie, and they cannot stop. Prepare your popcorn, Marco won’t let this “Clown of the Month” title to someone else without a fierce fight!

Marco Rubio made America more ridiculous than any Russian bot could ever imagine. Here is another opportunity for Robert Mueller to continue his investigative work…

Check out ABRA and easily invest in 28 cryptocurrencies or BIT10, an index of the top cryptos. Use this link to sign up and get $25 in free bitcoin after your first Bank/Amex deposit, or 1.5% cash back when you exchange cryptos
informationwarfakenewspoliticsconspiracyvenezuela
lighteye73
via steemit
$ 6.01
41
H2
H3
H4
3 columns
2 columns
1 column
34 Comments