Clown of the Month: Jeremy Hunt

Tough competition for the August clown, but once again, one clear favorite stepped ahead of everybody else — Jeremy Hunt…

You would thought that Tories could not choose a worst (or better?) clown than our March laureate, Boris Johnson. There you would be wrong. Now it does seem they tend to choose Foreign Secretary by the lowest IQ they could find in their party. This one can’t even remember nationality of his own wife! You just can imagine how such clown can represent UK interests abroad. Watch him in his first visit to Washington where he did some disgraceful hate-mongering at the Institute Of Peace… This globalist puppet devoided of any sense of decency called for more sanctions against Russia because of its “malign behaviour”, openly distorting international law rules while also mentioning “Western values” disregarding reports from the International organization and UK press about…

The high number of cannabis farms across London and trafficking of Vietnamese children to work in them is extremely worrying.
— Jakub Sobik
Anti-Slavery International Spokesman

High number of cannabis farms in London? How many? Well, according to the Evening Standard, from January 2016 to April 2018, the police uncovered 314 cannabis farms, with instances of more than one farm appearing on the same street. Mostly Vietnamese teenagers are exploited at those farms. Worse. The reports has been filed for over a decade (NewStatesman), but Jeremy Hunt was too busy protecting “Western values” by destroying National Health System (NHS) in UK. He really couldn’t follow this “The Independent” story, and certainly he did patriotically refused to watch RT report on that subject: 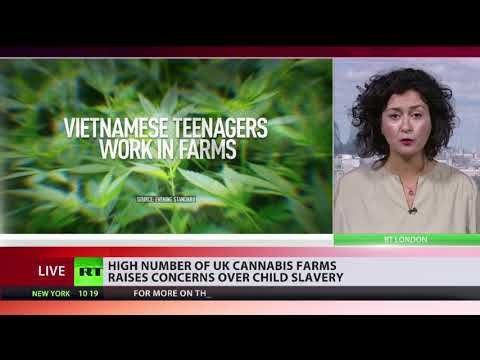 Please visit the links, see the facts, and then