Fridays come around so quickly and signal another one-week reduction in my remaining time on earth! An errant vacuum cleaner has done my stress levels no good this week and I've had my second Pfizer jab.

The jab was booked for Thursday downtown at BNH Hospital which tied in quite well with 347 day-old Dibnea, cordless-stick vacuum cleaner giving up the ghost.

The 347 days is important as it came with a warranty for 365 days and after calling the local service centre, it came to pass they were located in a mall just a couple of kilometres from where I was getting jabbed.
"Just bring the vacuum, the battery and the charger." said the man on the end of the phone. In Thai. So I did, and immediately upon my release from my thirty minutes post jab observation, jumped back on the bike and headed off to the Palladium World Mall. 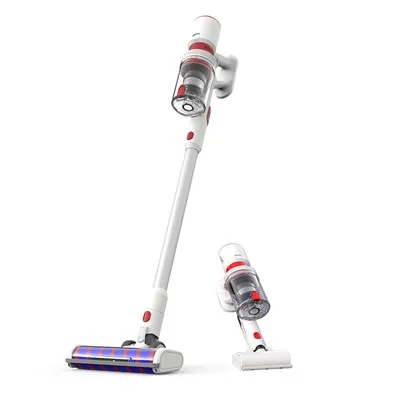 A not-that-cheap Dyson clone which was actually really good. Until it stopped!

Customer service in Thailand is on a similar level to health and safety and so I wasn't expecting much other than a load of waffle, blaming me for using it wrong and finally having it taken away for repair and not seeing it again till New Year 2023, but at least it was inside the warranty period.

Finding the unit in the vast mall wasn't difficult, 95% of the units were closed and so I arrived at 'Digital Life'. At my insistence, he tested the unit in front of my eyes. Straight away he said.
"Battery broken". I suspected he knew what the problem would be before I'd arrived but to be sure, I got him to try it with a new battery.

Sure enough, battery had packed up but no problem. Simple swap job. But no.
"Battery only 6-month warranty"

The next 10 minutes were a commotion, as the wife, via Line, ripped into him to no avail. I was checking up the cost of new batteries online and they were coming out at 3000Baht ($100 USD). The guy then offered to sell us a new battery for a discounted 2500Baht, but only with a 30 day-warranty. This didn't go down well with the wife, nor me, but when the guy switched off the call and handed me the cleaner back, I thought it was time to leave.

It's Friday night now and she's still banging on about it which is great, except that it's me who'll be sweeping the floors the old-fashioned way in the morning!

Anyway, away from the real-life crap, there's been some great posts on Hive again this week, and the HBI for my favourite post of the week goes to @riverflows for this post entitled We Turned a 40-Year-Old Camp Cooker into a Brand New Spirit Stove.

This type of post is right up my street. As I commented, I really could read stuff like this all day!
The other thing with authors like @riverflows is that they make good rewards and its absolutely deserved. They consistently turn out great content and consistently get well rewarded for it. This is exactly how Hive's reward system should work and seeing these authors and creators getting the exposure they deserve and creating the engagement we all crave is really great. 5 HBI shares are on their way!

Next. One of my all-time favourite people on Hive, @aalagenesis, am extremely talented artist (probably the kiss of death form someone like me who doesn't know a Turner from Toaster) lost their Master key and had to re-brand as @kulaykahoy. I'm sure she lost a load of followers in the process so please pop over and say hello. She posts daily full blown Actifit posts as she cycles her way around Manila as well as sharing her incredible art! Take a look at this picture... A couple of HBI shares are on my way to you, my friend as a small help with your 'reboot'!

@ecuadorhomestead was totally new to me until very recently but as I adore gardening posts, I was no doubt destined to find them sooner or later! The funny thing is though, the post that caught my attention was a post they had promoted on @ecency as an entry to the @ecency art contest which is run by the busiest person on Hive, @melinda010100. If you want to see a great picture of a duck before checking out some great gardening posts, pop over here and if birds, art, reflections and shadows are your thing, just get over and visit the eclectic @melinda010100! A couple of HBI shares are on their way to you two guys too!

That's it for today. For more suggestions, please check out @steevc's #followfriday post which he beat me to getting out today! (thanks for the mention.) And if you fancy a predicting the score of the Newcastle v LEEDS game tonight, head over to my @leedsunited post in the #sportstalk community! You could win 20000 Sports tokens!

I wish everyone a wonderful, healthy and happy weekend.