Molly and Her ICE CREAM!

And The Story Begins Here ..

A quiet night in the southern most end of New Jersey.. It was a lazy sort of evening as we are all gathered in the family room of our home. The sun is now setting earlier and the days feel shorter. By the time I get home from work, take a hot shower, prepare something for dinner, maybe take a walk around the neighborhood, and then finally settle in to relax, there isn’t much time for anything else. My wife and I may watch a little TV, then off to bed we go.

Tonight we had… It’s sad when you can’t remember what you just had a few hours ago… We had, ummmm, give me a second... Oh yeah! Chicken on the grill. How did I forget that? Anyhow, I make grilled chicken tenderloins usually once a week. I have to make them because Molly loves chicken on her kibble in the morning and in the evening, and we were running low. We needed more chicken!

Recently, and after a visit to the doctor .. I decided to adjust some of my bad habits. One of those things is having a beer when I get home. Now if it was a light beer, roughly 100 cal or so, then who cares. But nope. Brad has to have craft or IPA beers. These beers are built around taste. If you’re going to enjoy a beer you may as well enjoy one that taste good. That’s the idea anyhow. The beer didn’t have to get eliminated for my diet, just reduced. This was a personal decision not a decision the doctor told me to make. So far I’ve been feeling pretty good and it’s helped lose a pound or two as well as reduce my sugar intake. Craft or IPA beers can range in calorie intake from 150 to 350+ calories. I’m not a calorie counter, but I have to admit that’s a lot of calories. I’ve been trying to limit my bread intake as well. We’ll see how long this will last. LOL

I made the chicken, we ate some of it and put the rest away for Molly. I’ve been cutting down on my portion sizes, at least I think, so I didn’t seem to get enough to eat tonight. I was sitting watching TV and it was getting close to 9 o’clock. My belly was growling a little so I decided I needed a snack. But what? I already know what.. and it's something I should be cutting out of my diet but I haven’t had the willpower to do it yet.. ICE CREAM!

Ice cream it is!

Guess who else in the house likes ice cream? random photo, but felt the need to include a photo of her here. What better one than of the one of her in her grass bed. Silly puppy

Molly just has this sixth sense when it comes to ice cream. I can get off the couch do a number of things around the house and she doesn’t lift her head or move a muscle. When it comes to ice cream, she knows exactly when it’s time and when I am going out to the garage freezer to fetch it. Her head pops up, her senses are heightened and she locks her eyes on my ever movement. I cannot get myself ice cream without her noticing and wanting her own little bit of it.

So tonight, like every other ice cream night, she notices right away. She lifts her head, stares me down. yeah, she's looking a little rough, but hey.. she just woke up

The next few movements (and photos) are quite rapid. After raising her head and watching me for approximately two seconds she realizes I am heading out to the garage to get ice cream. She darts from her bed in a flash! So fast in fact the camera does not have time to focus on her. Actually the camera was acting weird and most of these first few shots are CRAP. Just sayin. The couch towers over Molly's small body. It’s the equivalent of jumping off a two-story building. She takes the leap and knows she’ll land on her feet without injury. Next she focuses on my movements .. again and takes a moment to stretch those muscles. She needed a good stretch because she just woke up. Molly also picked the perfect location for the stretching, a space on the carpet between me and the garage. Or should I say between me and the ice cream. Because I was moving rather slowly .. and NOT as fast as I typically do, because I was taking photographs to document this ice cream event, She got frustrated. In her frustration (or excitement), Molly began to swat. Swatting is something a lot of Shih Tzu owners are used to. Well at least the ones I talk to. Most of them say their dogs also perform the cute swatting motion with their front paws when they want something. Molly is a superstar at swatting. She can swat for several seconds up to a minute or so. I’m sure it doesn’t help that I keep repeating “do you want ice cream? do you want ice cream? do you want ice cream?” Poor dog. I hate to torment her like that but it is so stinking cute I can’t resist it.

OK, now that the swatting and tormenting is over .. I head to the garage and pull out everyone’s favorite flavors of ice cream. For Molly she loves good old fashion, simple but pure, vanilla. Turkey Hill is one of our favorite brands, and is considered local for us in this area.

Molly thinks the homemade vanilla is to die for. Obviously some would disagree but that’s OK everyone has their own temperamental pallets and we all prefer what we prefer. Actually vanilla is probably the safest flavor for dogs given the allergies and poisonous things, like chocolate and raisins, that are found in other flavors. I scoop out a few little spoonful's .. or large spoonful's for a dog this size LOL, and plop them into Molly's food bowl. Just a side note, I made this bowl for Molly along time ago when our friends owned a pottery factory and let me make the bowl. It is a stoneware bowl that can take a beating. I’ve dropped this thing a couple of times and it keeps on going. It’s the perfect height and size for Molly. If you take a look just to the top left of the photo below, you can see I have somebody that’s anxiously awaiting her frozen, delicious treat. What she’s really thinking is, “Hey sucker put that bowl down here, will you?” I will. I will. Just give me a minute to take a few photographs. Patience patience patience. Taking a few photographs was best anyway. It allowed a few moments for the ice cream to soften up so it wasn’t so harsh on her lips, tongue, and mouth. I don’t want the poor girl to get frostbite. Also, Molly tends to eat her food very rapidly. This may be result of having to fight for her food as a young pup. When we rescued poor Molly she was surrounded by a bunch of other larger, bully dogs that I’m sure got to the food before she did.

Well, she hasn’t had to worry about that for quite some time and never has had to fight for her food since. Then BAM! She is on it like fly on… Well you know what flies land on. Poo poo. She’s fast and thorough and sharp as a tack! LOL. Anyway she’s exact and she doesn’t waste any time getting down to business. So here’s where the bad part comes in. Although we’ve been through this 1000 times before, Molly’s memory is not so good. She never remembers that the next step will be to wipe down that face with a wet paper towel or cloth. If I don’t do this, Molly will proceed to the living room where she will wipe her entire face all over the carpet. We will probably never see the little bit of ice cream that comes off her beard, but over time it will make our carpet disgusting. I can’t stand the thought of it so she gets a good old fashion wipe down. Whoops! As you can see she noticed me .. taking the picture of the wet paper towel and has noticed this. Her bald eagle like senses understand what’s going on now. Now she remembers! She pauses for a brief moment, looks at me and paper towel, and plots her next move. If you look closely at her bottom lip you can see the ice cream that is accumulated there. It must be removed and it must be removed swiftly. She gives me one last look .. I let her lick her lips so she can get the residual deliciousness from the left side and from the right. Somehow the bottoms eludes the tongue. She thinks about what’s going to happen and turns her head in preparation to runoff the living room.

I quickly stop her .. and lower the paper towel to her face. She sees it coming closer and turns her head to the left then to the right, putting her best effort forth trying to avoiding the inevitable. In the end I’m able to grab her quickly and wipe wipe wipe until the little bit of ice cream is no longer a concern. Molly licks her face one last time .. then I give her the all clear and she darts off to the family room. She rubs her face for a little bit then realizes that her mommy and daddy have ice cream too! She wonders if maybe she can mooch some more off of two of us. Well that’s not going to happen I can tell you that. For one I have chocolate chip mint and she cannot have the chocolate. Plus she just had her very own bowl a few minutes ago. Despite what she may say, she does not need additional ice cream. As you can see above, she takes up residence in front of me and the baseball game .. I am watching on TV. The Phillies are playing the Orioles tonight and it’s been scoreless thus far. The Philadelphia Phillies are my team since we are located not too far from Philly, And I grew up going to the games as a young child. I’m rooting for them although the Baltimore orioles are pretty cool team too. Phillies are doing pretty good this year, and are only a couple of games are the first place. I really hope they pull it together and pull off a win tonight.

I ended up stay up too late and still didn't catch the end of the game. They went into extra innings where the Phillies pulled off a 3-2 win.

Again, I’m getting off track talking about sports, but @bozz doesn’t mind I am sure. LOL. It’s a back to the story. Molly is now perched in front of me staring me down in hopes I will cave and give her more ice cream. I sure you that didn’t happen but there’s always next time.

For now I just tell her to look away. Molly just look away and I will be OK. Ha ha ha ha.
Ice cream is good! She eventually realizes there’s nothing more to be had. The sweet deliciousness that was once frozen is now melted and creamy inside of her belly. She is content. She is back on her bed and thrown of blankets. She Is A Happy Dog.

And I Am A Happy Human.

Thank you for swinging by my blog and checking out the post. Have a great day!

Love Orchids? Consider joining our community. We look forward to seeing you there!!!

A place for people who Love Orchids! 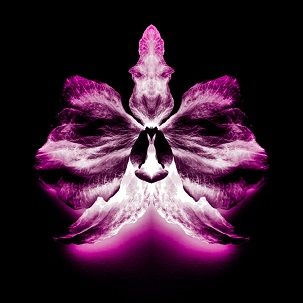