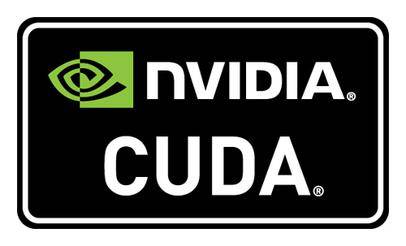 Today we continue with the Parallel Programming series around Nvidia's CUDA API to talk about Atomic Functions and Synchronization.

Until now in the series, it was only shown how the host (CPU) can wait for the device (GPU) to finish the kernel execution. This was done using the API call cudaDeviceSynchronize(). But what about the execution on the various threads of the GPU? Is there any synchronization involved that permits only one thread to access a specific chunk of the shared and global memory? The simple answer is No.

The CUDA programming model is not specifically defining (on its own) in which order a thread writes data to the various memory spaces. Additionally, any another device thread or even the host, might also not observe the data "changes" in the same way. So, similar to any other parallel programming model, threads have undefined behavior and are on an endless data-race, when no synchronization is specified by the programmer.

Its worth noting that memory fence functions only affect the order of the memory operations by a thread, but do not ensure that these operations will be visible to other threads. In order to ensure the correct visibility, and that no cached versions of data will be used, the volatile qualifier should be used on the variables that should be synchronized.

The CUDA API also provides synchronization of threads in the same block using the __syncthreads() function. This call makes the calling threads wait until all threads in the same thread block have reached this point. It also ensures that all global and shared memory accesses made by these threads prior to the call of this function will become visible to all threads in the block. In other words, using __syncthreads() one can coordinate the communication among threads of the same block, therefore solving potential read-after-write, write-after-read and write-after-write data hazards.

Because using Memory Fence and Synchronization Functions can become quite tricky, CUDA also offers specific functions that perform common read-modify-write operations on data risiding in global or shared memory. These atomics can be:

Using atomicCAS() any atomic operation can be implemented.

Using combinations of these three functions any other bitwise operation like not, nor or nand can be easily implemented.

Consider a very large vector A[N] of randomly generated unsigned 32-bit integers, and so values in the range [0, 232). Let's write an algorithm that finds the maximum value inside of vector A:

In non-parallel C without CUDA the algorithm is very easy to implement, but also having the worst performance. My 1080 Ti has 11GB of DRAM, so let's make the vector of size N = 231, meaning that about 8.59 GB will be needed only for storing the vector A. The vector size can be easily defined using the limits.h constant UINT_MAX (of value 232 - 1) by dividing it by 2 and adding 1:

The vector can be defined as an unsigned integer pointer, allocated using calloc() and then deallocated again using free():

Filling the vector A with random values is as easy as:

Last, but not least, the max value calculation can be done as follows:

Compiling the program with gcc and then executing it, the following result is shown in the console:

Let's not calculate the execution time yet!

To keep things simple, let's only create a single block with threads organized in 1D. Let's run the kernel for various numbers of threads to compare how parallelization improves the computation!

First off, let's turn the serial calculation into a function:

Serial calculation is now as simple as:

Afterwards the memory can be easily deallocated using cudaFree():

The vector A can be easily transferred to the device using cudaMemcpy():

The result (max_gpu) has to be initialized and transferred to the device, and later on brought back to the host, again using cudaMemcpy():

The kernel function for the device/GPU is declared as:

Using the threadIdx.x and blockDim.x variables available to the thread its easy to calculate the range it has to operate on: The thread then computes the max value for its range as follows: The max value of the block is then changed using atomicMax(): The thread block dimensions are defined as a dim3 structure: The kernel is executed for all multiples of 2 from 2 up to 1024 threads:

An easy way to calculate the execution time of kernels, and even host functions, is using events!

Events are defined and created as follows:

Before the function that should be "recorded" cudaEventRecord(start); has to be called.

After the function we write: The events are then destroyed using:

Printing out the max value calculated, as well as the execution time, the code prints out: 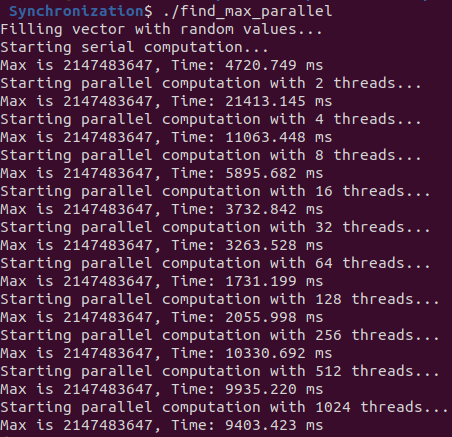 Previous articles about the CUDA API

I'm not sure about the next article yet, but there is surely a lot more to cover!