Today we continue with my mathematics series about Signals and Systems in order to cover Exercises on Continuous-Time Fourier Transform.

The envelopes, and so the Fourier Transform (analysis) equation, are defined as follows:

The Inverse Fourier Transform (synthesis) equation, which gives back the original signal is defined as:

The calculation can be skipped for many common signals through the use of tables of Fourier transform pairs.

Fourier Transform from Signal Graph [Based on 8.1 from Ref1]

Let's consider signal x(t), which is a single triangular pulse of unit height. The pulse is symmetric about the origin and has a total width of T1.

The total width of the signal is T1 and because the signal x(t) is symmetrical it has to be sketched in the range (- T1 / 2, T1 / 2). Its amplitude will be 1 at the origin, so the graph is as follows: 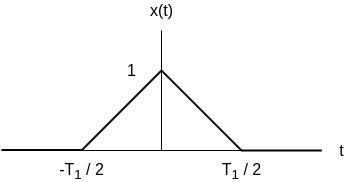 is a repetition of x(t) every To = 3 T1 / 2 time units. Because the original signal has a width of T1, there will be zero amplitude for a total of T1 / 2 units before and after the signal. Graphically, we thus have:

From the tables, the Fourier Transform of a triangle function, like x(t), is known to be equal to the sinc function squared, or:

Proving this result is quite tedious as integration by parts is needed. A nice proof can be found here 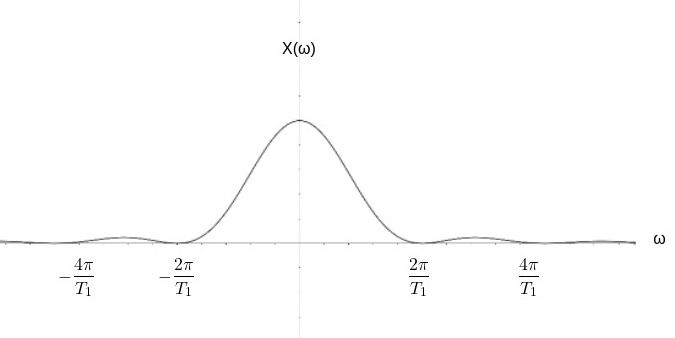 Similar to the Fourier Transform, the Fourier series coefficient is again a squared sinc function, but with a different amplitude.

More specifically, the calculation leads us to:

Graphically, the Fourier series is identical to the Fourier transform in all but the magnitude:

Its also easy to notice that the relation between ak and X(ω), which is:

is satisfied completely in the case of this example.

Fourier Transform from Signal Equation [Based on 8.2 from Ref1]

Let's find the Fourier transform of each of those signals.

The unit impulse function is one of the common signals. From the table that can be found at Ref2, the generic result for δ(t-a) is:

So, in the case of a = 3, the result is the following complex exponential:

The right-sided decaying exponential is also one of the common signal cases, which is defined as:

The output of a causal LTI system is related to the input x(t) by the following LCCDE:

Let's start by taking the Fourier Transform of the LCCDE. The signals x(t) and y(t) are simple as they give X(ω) and Y(ω) respectively. But, in the case of dy(t) / dt, the differentiation property needs to be applied, which as we know yields jωY(ω). Thus, the final result is:

The decaying exponential x(t) is one of the common cases, which gives:

Thus, the Fourier Transform of the output is equal to the multiplication of X(ω) and Y(ω):

The resulting output Y(ω) is a sum of common signals, which makes taking the inverse Fourier transform of it a piece of cake. So, the output y(t) is:

I think its easy to see that using this approach simplified the calculation by quite a bit. From previous examples we already know that calculating h(t) can easily become complicated. And let's also not forget to mention that we all but skip the convolution part, as convolution turns into multiplication in the Frequency Domain.

Next time we will get into exercises on the discrete-time Fourier series and/or transform!