Today we continue with my mathematics series about Signals and Systems in order to cover Discrete-Time Modulation.

Consider x[n] to be the discrete-time signal to be "modulated". The signal c[n] which is used to modulate x[n] is known as the carrier signal. As a result, the modulation property can be written as:

The discrete-time Fourier Transform is a periodic function of frequency, which in turn makes the convolution also periodic. This is also the main difference with the continuous-time FT, where the convolution is linear.

The mathematics might seem similar, but the applications are different. As we saw last time, continuous-time modulation is a major concept of communication systems, as it is used for transmitting signals over various types of channels. But, in modern communication systems, these signals might have to go through a lot of stages and types of modulation. Thus, this conversion from modulation to another is better implemented digitally, with digital meaning discrete-time signals.

whilst the sinusoidal signal has a FT of: 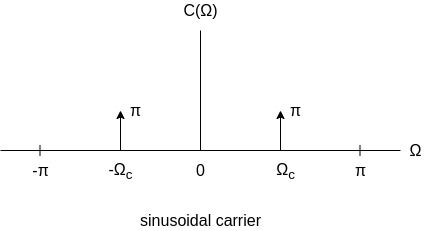 A sinusoidal signal can easily be defined with the use of complex exponentials, as follows:

which also explains why the two graphical representations are so similar.

Due to the nature of discrete samples, another useful type of carrier is also a periodic pulse, which is constant for some samples of the period and zero for the remainder. This signal can then be used in modulation to extract time slices of the modulating signal. Visually, pulse carriers look as follows:

The pulse train with the smallest time of being "on" can easily correspond to a periodic train of impulses, or even unit samples. A impulse train carrier allows sampling the modulating input signal, and leads to another very important concept, known as the sampling theorem. We will get into sampling in the next part of the series, but let's just note that it provides a major bridge between continuous-time and discrete-time systems and signals. 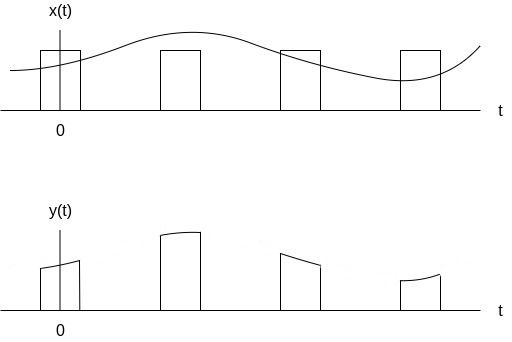 Using this pulse carrier only specific time slices of the original signal x(t) are allowed to pass to the output y(t).

Similar to continuous-time, when using sinusoidal carriers demodulation is defined as a modulation with a sinusoidal followed by a low-pass filter.

Complex exponentials just require a re-modulation in order to recover the original signal.

Let's also mention that modulating a signal with the signal (-1)n, passing it through a low-pass filter and re-modulating it again, is an easy way of implementing a high-pass filter:

When representing the data for transmission, using pulse trains allows a specific type of multiplexing known as time-division multiplexing. Using TDM, the time slices from signals in other channels can be inserted to the carrier as well. Recovery or demodulation is also quite simple.

Visually, using amplitude modulation with a pulse carrier, multiple signals (and so multiple data) can be multiplexed through TDM, as follows: 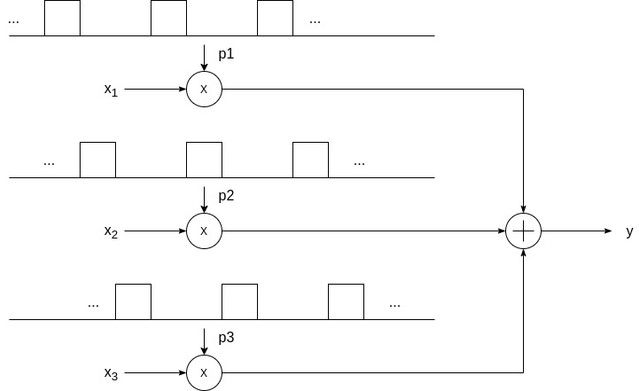 Next time we will get into Sampling...