Tonight I harvested two of the remaining three cannabis plants in my grow tent, and the first plant I harvested is ready to be jarred for curing.

She only took a few days to dry and will get too crispy if I leave it any longer. The weight after drying was 3.1 grams, quite a bit lower than expected, but I also consumed a little while it was drying, so likely there was about 4 grams total.

Inspecting the weed, I'm pretty happy with it. The nuggets aren't very dense but it's potent stuff and tastes wonderful even though it hasn't been cured yet, so it will taste even better if I leave it in the jar for about a week.

From here I'll just clip away the buds from the stem with some scissors and put them in a small Mason jar.

Let's see how it looks under magnification.

I don't know what it is, as far as the strain is concerned, but we have some good stuff here :)

Now on to the harvest!

These two cannabis plants I feel are ready for harvest according to how I like my cannabis. The trichomes are just starting to change in color and still maintain a mostly milky appearance, which will produce a more intense psychoactive effect.

We can see one of them is bent right over, this doesn't matter at all at this stage, and wasn't an issue in the tent because I leaned it up against the other plants.

The one leaning is the smaller of the two if it's not obvious, and the yield seems pretty small but the smell is pungent.

The largest one however barely smells like anything. This is somewhat strange to me, but the buds are super fat and dense, and the weight for the big girl was surprising to me.

Pretty good I think, so perhaps I will get around a quarter or half ounce. I think at least a half because the buds are super dense, maybe a little less, we'll see.

It's a beautiful plant, and the buds are a little sticky, but I just don't think this is a super powerful breed here. I'm still grateful regardless of how potent she is and am always happy to have a successful harvest no matter how good the cannabis is. I can still say I have four different strains growing, I just don't know what they are!

I was having difficulty with getting zoomed in as much as I would like with the KODAK PIXPRO Astro Zoom AZ421-BK 16MP and had this idea to try my smart phone camera instead. It seems logical that the Kodak would take better macros, but that's just not the case when combining with the Brightech LightView Pro Flex 2 in 1: 5 diopter 2.25x with the phone camera.

Now some macros of the one that's tilted over. 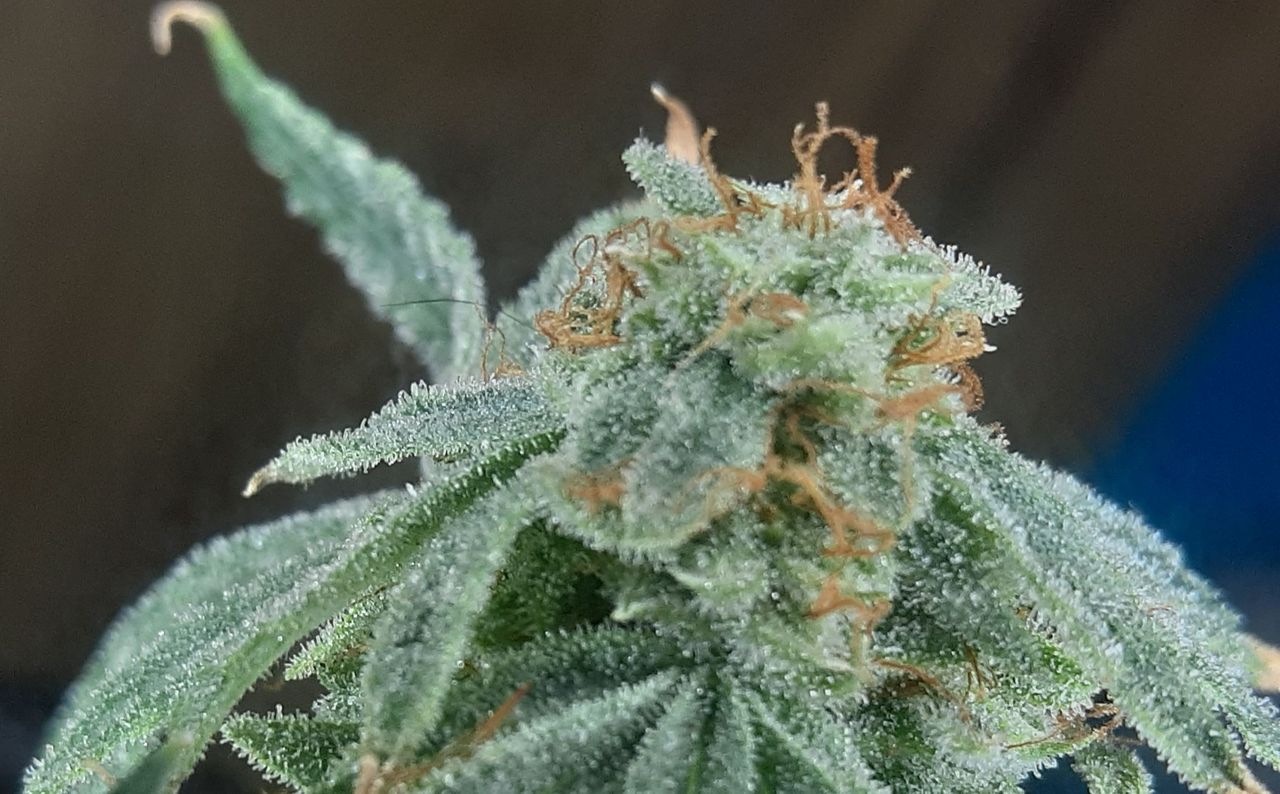 It's only a guess based on the look and smell, but I think the smaller one will have a stronger psychoactive effect. It is similar in its smell to the one I'm curing currently, and we can see it frosted up a bit more and is some quality looking cannabis.

There is one more cannabis plant left to harvest in the tent. It still has mostly white hairs and a mega frost forming that might even out frost these girls.

What's more, the smell is like nothing I've ever grown. Pungent is not the right term, it smells like fruity berries and is intensely sticky.

The bag that it came from was labelled purple cheese, but my research online has found purple cheese is an Indica auto flower. This I think is some kind of Sativa.

One thing is certain, me and everyone who smoked it all agreed it was some of the strongest cannabis we have ever smoked, and we're some heavy cannabis consumers, so it's surely fire.

Which plants are your favorite out of the photographs?

Thank you for stopping by, I hope you're all having a great day! -@futuremind