nathen00769
a year ago
inMusic

@slobberchops came up with a new music writing challenge after wistfully noting that we didn't seem to have many fun posts of this nature these days, whereas a couple of years ago on Steem, there were many.

He is right, they were fun and despite my misgivings on his ulterior motives in so much it's an excuse for him to spam the chain with his love of altern8ive dross, I'm here to humour and educate him!

The rules of the game will be posted at the end.

It was late 1980 and I had entered my 4th year at high school and the start of my 'O' levels. At the time, most pupils fell into one of three musical factions:-

The Mods - who wore Black Harrington jackets or fishtail parkas emblazoned with button badges and patches of The Who, The Jam, The Specials etc and who generally had skinheads.

The Heavy Rockers - Denim jackets with embroidered band logos such as Rainbow, Scorpions, even Meatloaf. The more serious Rockers might have also had such bands as Gillan, MSG (before it became food additive!) and even Jethro Tull!

Then there were the Rockabillys with their red Harrington jackets. Lovers of the oldies. Eddie Cochrane, Gene Vincent and the new kids on the block such as Matchbox and the Stray Cats. The rockabilly were the geeks, the odd ones out, the misfits and I was a Rockabilly. My red Harrington proudly emblazoned with confederate flag across its back.....we were Brit kids from a rough northern high school. The nuances and connotations of the symbolism passed us by. It was on the front of the General Lee for god's sake, and I secretly hoped Daisy Duke would have been impressed! And no, unlike every other school I knew, we didn't have a school uniform.

My love of Rock and Roll and at that time, of Country and Western had come from my Dad and my Aunty who always had music playing in the car or whenever I stayed at her house. She loved Elvis. My Dad had played the piano in a number of failed Rock n Roll bands in his younger years as well as being church organist at a local spiritualist church. On top of that, even when I was a small child I remember him going off to do an odd gig with assorted big bands and jazz bands but never ever got to seem him play in public myself sadly. He did however like to knock out some RnR tunes on the piano at home. Looking back, I guess our neighbours absolutely hated us!!

It was quite late in the year I seem to remember and I was sat in English class. Strangely, I have no recollection of anything we did in English which of course is obvious from my writing! But my desk was at the back, by the window on the third floor of 'the tower block' with a wonderful view across open fields to the East Coast mainline where I watched Deltics, Brush 4's and HSTs rushing up and down from Leeds to London and back.

The classroom was the home of Miss Rowbotham, and she was the school pin-up teacher. Probably in her late 20s and very similar in looks and style to Kate Bush. Another reason I have not got a clue as to what we actually learned!

Early on in the two-hour lesson, there was a knock on the door, and everyone looked up. Miss R just shouted "come in" and the door was opened by a younger pupil carrying a wrapped up present.
This little, slightly embarrassed wretch muttered, "Mr Stretch sent me with this present for your birthday"
Now Stretch was the pupil's favourite teacher in the school and like Miss Rowbotham was slightly bohemian in his appearance and was totally cool. He was the only teacher I knew who never wore a shirt and tie. His name wasn't actually Mr Stretch, it was Mr Strechkowvsky or something that neither teachers nor pupils alike could either pronounce or spell so Mr Stretch it was and it seemed there was a bit of a thing going on between him and Miss R!

The class howled at her to open it and she did but I honestly can't remember what it was, perhaps there was a train passing at the time so my attention would have been diverted! No sooner as we had settled down, there was another knock at the door. Another wretch with another present, then another and another and I'm not sure how many exactly but then one of the kids came with an album. It was wrapped but in the history of presents, albums and boxes of Maltesers are probably the most obvious gifts known to humankind however they are wrapped.

This time I was interested to see what Miss R liked even though generally, the rest of the class had quickly bored of this gooey, teacher to teacher love-fest. 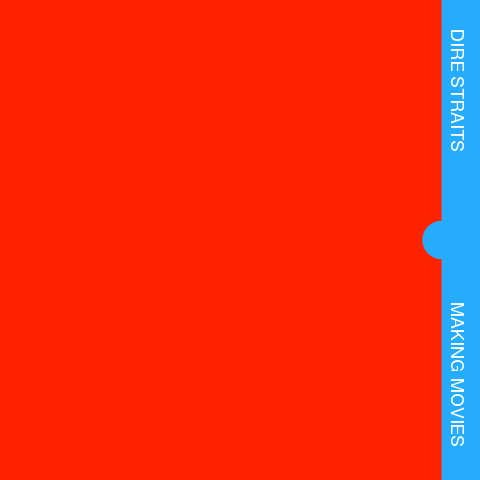 Not at all what I was expecting but an interesting choice. At the time, it was Dire Straits latest album and although I didn't own a Dire Straits album, I loved the track 'Sultans of Swing' from their first album which still seemed to get a lot of air-play, albeit in a redacted form!
I loved the album cover. Unlike any others I can remember from the time, it didn't have flashy artwork or band photos, it was simply red, with a blue edge and said 'Making Movies' and 'Dire Straits'. I didn't actually buy it but I borrowed it from a friend and 'taped-it'. Even today, I can listen to 'Romeo and Juliet' on repeat for hours on end.......

This was just the back-story of how I got into the band! My actual album of choice for this challenge is, in fact, their next album, released on the 20th of September, 1982 and entitled; 'Love Over Gold' 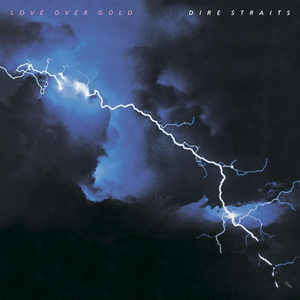 With a 41 minute running time, there are just 5 tracks on this album. Only one of them was issued as a single in the UK which was Private Investigations, reaching No.2 but unless you're a fan, its a pretty forgettable track.

Dire Straits are a difficult band to define in a musical sense. There are many different elements that creep into their compositions from Prog Rock to Jazz and from Rock and Roll to Pop and being honest, I'm not their biggest fan, nor do I think that Knopfler is the worlds greatest guitarist. He is obviously great and talented but I feel he has a rigid, one-dimensional style that's hidden due to his massively varied use of different guitars to create different sounds and moods. Perhaps our resident axeman @steevc might like to proffer an opinion on this.

So, I chose this album for one track and one track alone. Telegraph Road. This one track encompasses an almost historical journey through the creation of middle America using ever-changing moods, styles and tempos to illustrate the story. It leaps from majors to minors, from climatic crescendos to almost classical passages. It's deep with poignancy and is an epic production. The thunder and lightning infused respectfully to enhance the experience. It actually reminds in a way of a Jim Steinman classic mini-opera with a whole performance built into one epic track but I feel there are also Dylanesque references and keynotes too. It's incredible songwriting and arrangement.

If you have never heard it. Just sit and set aside 14 minutes of your life, without interruption to listen and be pushed through a musical, emotional rollercoaster. I talk some shit at times, but trust me on this one' it will most definitely not be 14 minutes wasted!

This is the original album version but if you search YouTube there are some amazing live versions over the years as Knopfler has continued to tour, that is until last year. His last world tour in 2019 seems to be his final tour. Perhaps his old fingers aren't what they used to be but he seemed to play less on the track and left it more to the other guitarists and pianist. 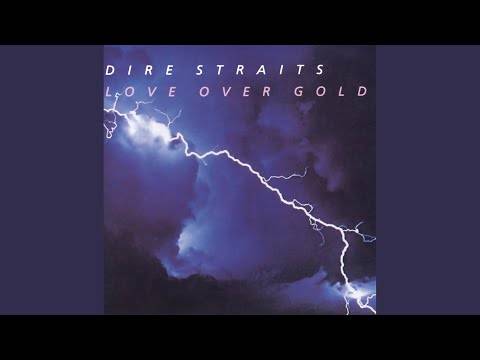 Interesting fact. Mark Knopfler actually wrote and recorded 'Private Dancer' for this album but felt later, it was better suited to a female and hence it was passed on to Tina Turner and the rest is history!

Well, that's it. An hour and a half of my life writing this post which I won't get back! Please listen and let me know your thoughts and opinions in comments.

PS I am now lost in thought wondering if Miss Rowbotham and Mr Stretch ever got married. She would be about 70 now and possibly still worth a dabble.......

All images and the track are used under fair usage copyright exceptions for use as review or educational purposes and the various copyright holders are respected.