For today's post, I'll be walking you through the basic adjustments on a typical Strat style guitar. I'll also share a tip for fixing stripped screw holes, a common problem on cheap electric guitars.

The first step for me is always to see if the neck has a truss rod, which is a mechanism built into the neck that allows you to adjust the curve of the neck and fretboard. If your guitar has one, there will be a way to adjust it, usually with a hex head bolt at just above the nut, as seen below. Sometimes these will have a small cover over them, and I've seen a few guitars, mostly acoustic, that have the adjuster at the lower end of the neck. If you've never done a truss rod adjustment before, I highly suggest finding a more detailed guide to read before trying it out on your favorite guitar... you can damage the neck with this. Generally, tightening the adjuster will pull up the ends of the fretboard, loosening it will push the ends down (and raise the middle). Usually, you will be loosening (not really, but you turn it counter-clockwise) the adjuster to flatten out a bend in the neck that has occurred over time. Perfect adjustment can vary from guitar to guitar, but generally when it's adjusted properly, if you hold down a string at the first and last frets, there should be just enough room to slip a sheet of paper under the string in the middle of the neck. 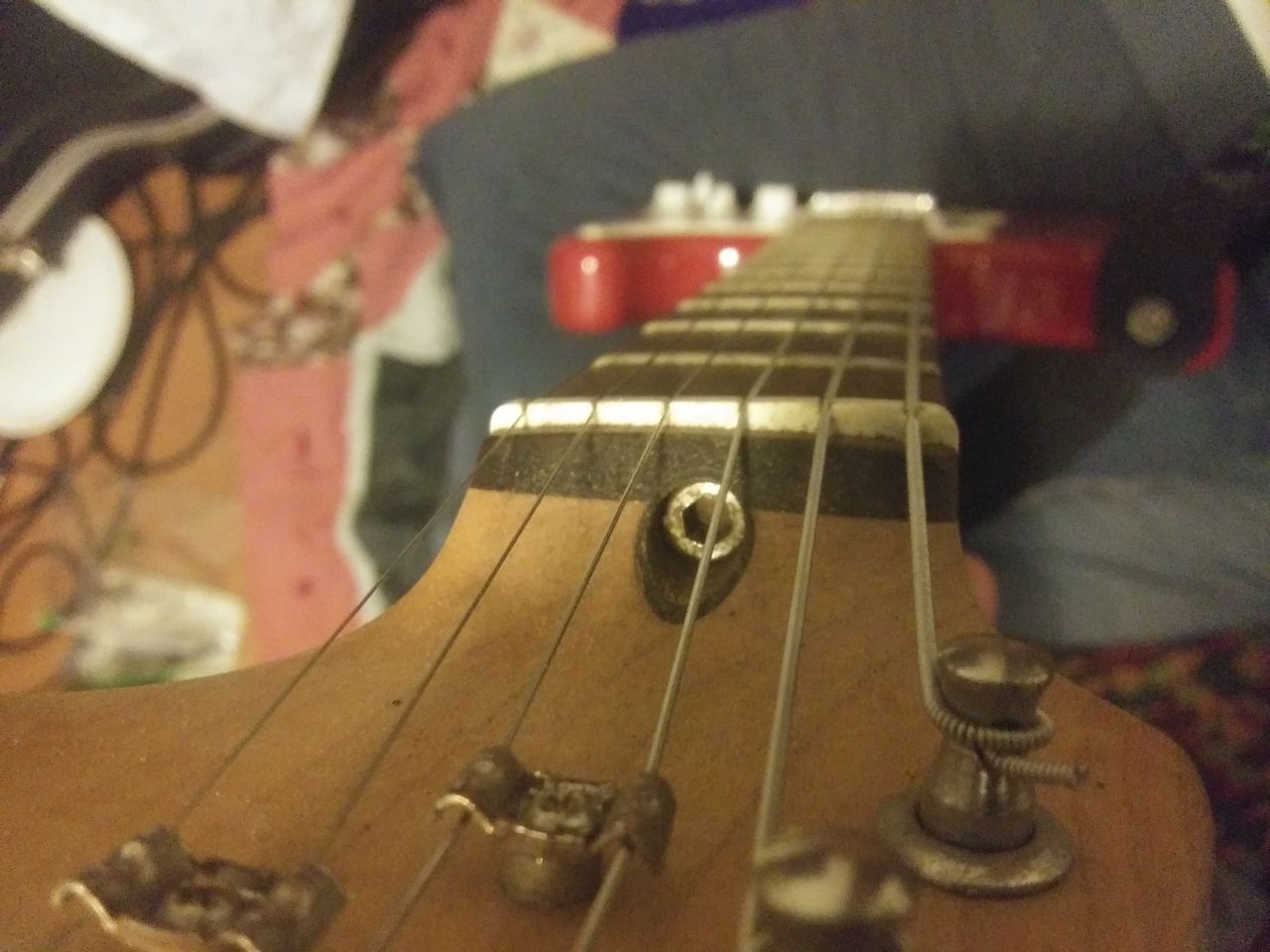 Once my neck has the right curve, I move down to the bridge. Some guitars will have no bridge adjustments to make, especially acoustic guitars. On this one, each string has its own (I think they're called...) saddle. The distance to the nut can be adjusted by the phillips head screws seen at the very bottom of the picture, and the height can be adjusted by two inset hex screws at the upper end of each one. I like a light touch on my guitar, so I lower each one as low as I can without having any 'buzz' on the string. If you don't know what 'buzz' is, you will. Adjusting the distance can change how much tension you need on the string to put it in tune, but I usally just use this adjustment to align all the saddles in a way that's comfortable for my hand. The way I lower them, the height adjustment screws end up digging into my palm a little, so if I have a guitar set up just the way I love it, I'll file them down flush with the saddle. 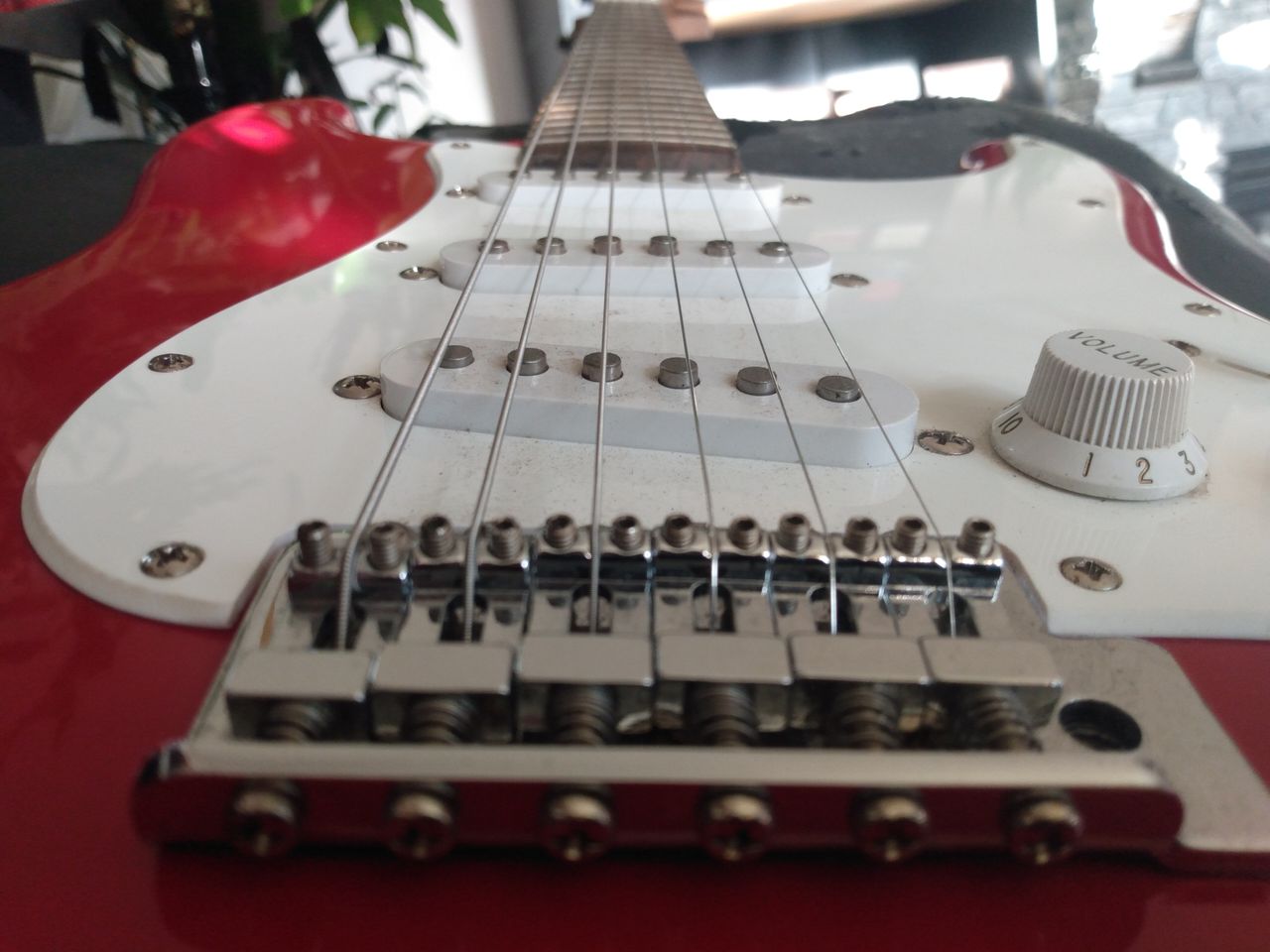 The pickups will usually be my final adjustment. Most will have an adjustment screw on either side that allows you to raise or lower the pickup, as shown below. I like to get mine as close to the strings as possible without touching them, which will give the strongest signal to your gear. I've had a couple of guitars where I would lower one of the pickups, to get better volume balance when switching between different ones. I'll tell you how to mess with your stuff, I'll leave the decisions about HOW to mess with it up to you! 😂 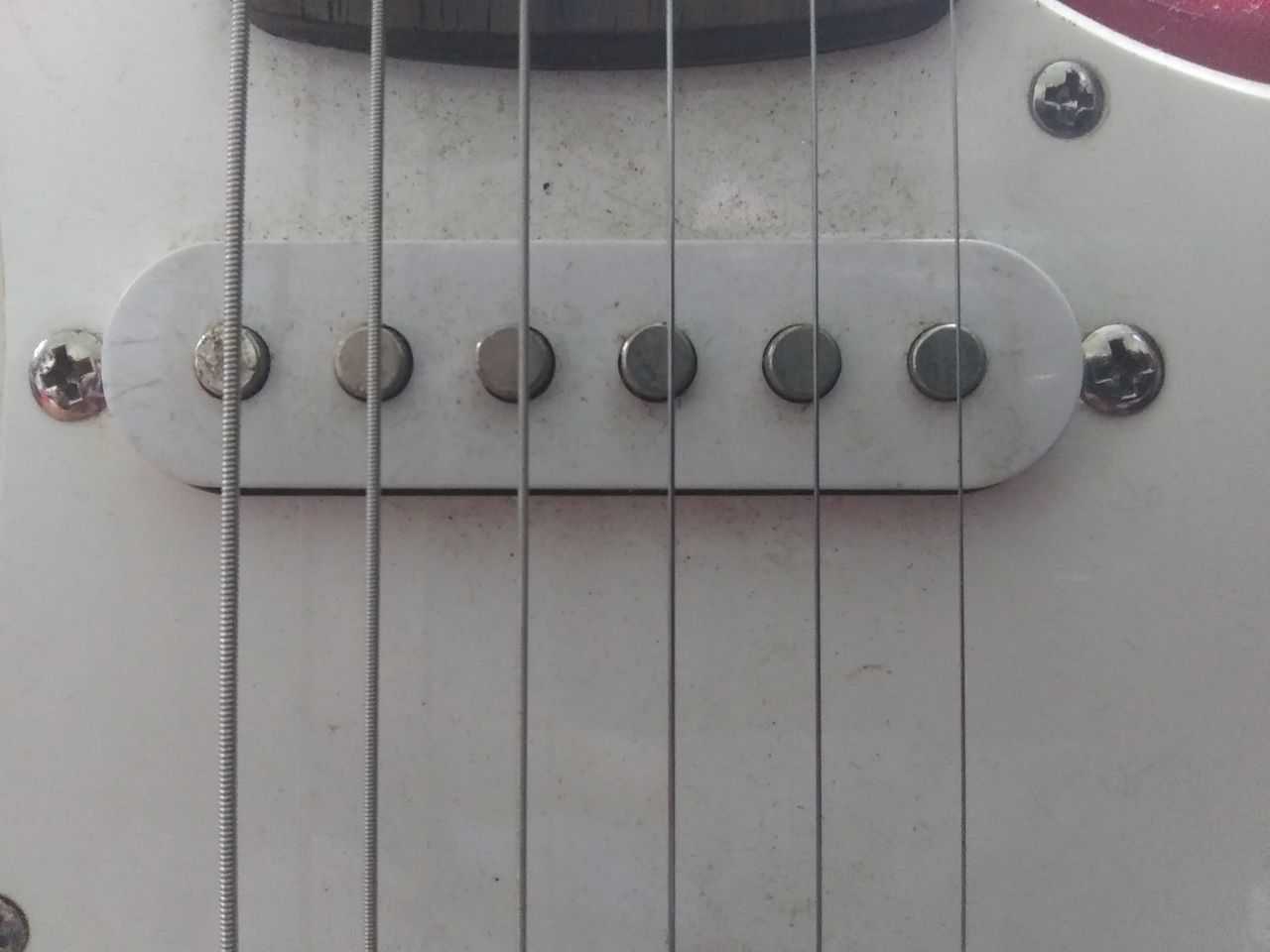 This dusty old war horse was in pretty good shape for its age. It did have a loose screw at the plug, though, which was causing some annoying noises when plugged in and turned on. An old-timer's tip for fixing stripped screw holes is to just stick another piece of wood in the hole. For this, I had a piece of weed stem handy. Usually, I'll use a toothpick or a bamboo skewer. The bamboo skewers work great for stripped holes in your door hinges. 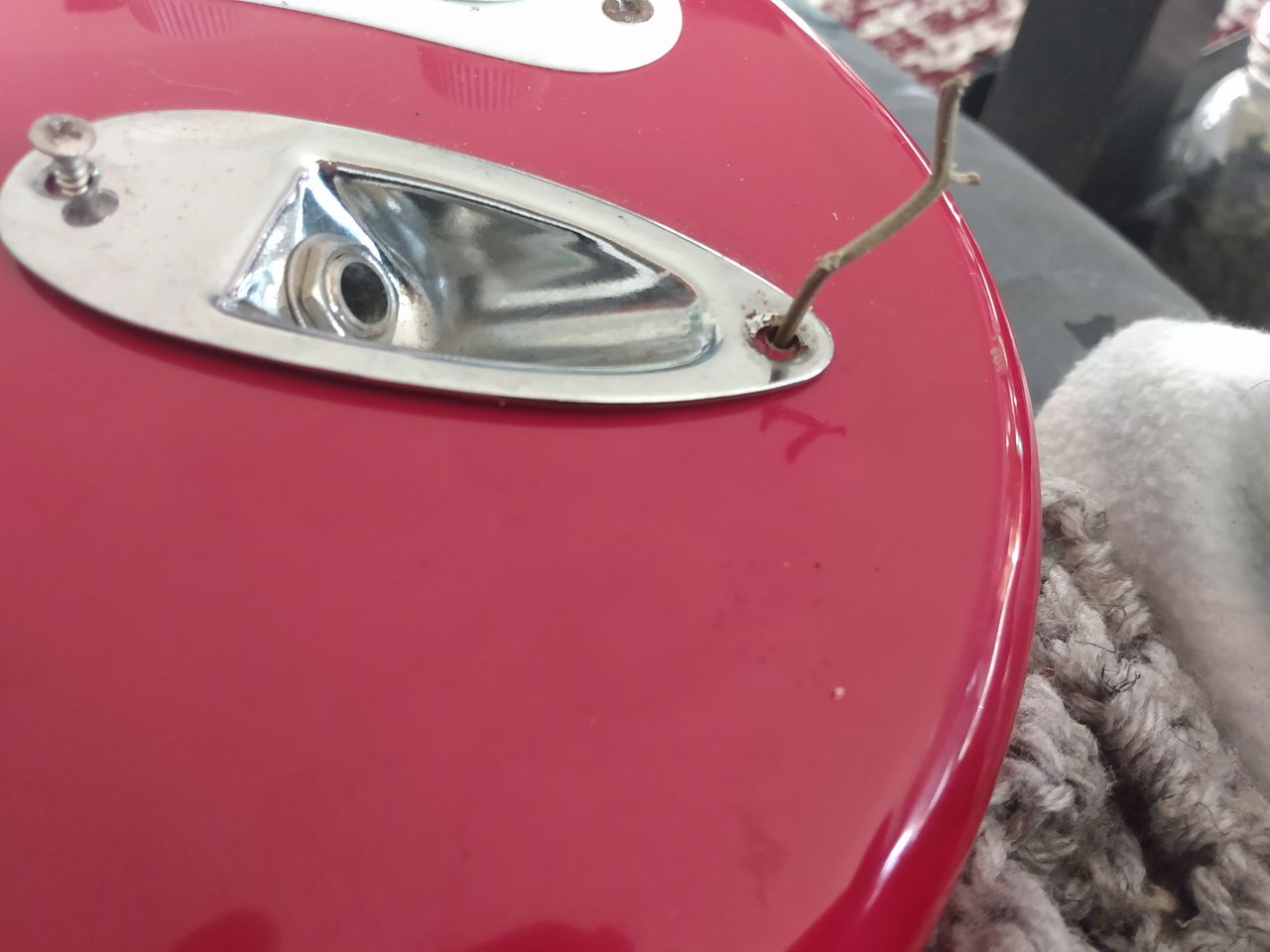 I like to break the insert off as close as I can to flush before putting the screw in, but some people insist it will hold better if you let the pressure from the screw head cause it to break. I don't know if it actually works better, I know that doing it my way works well enough, and leaves a cleaner finish. 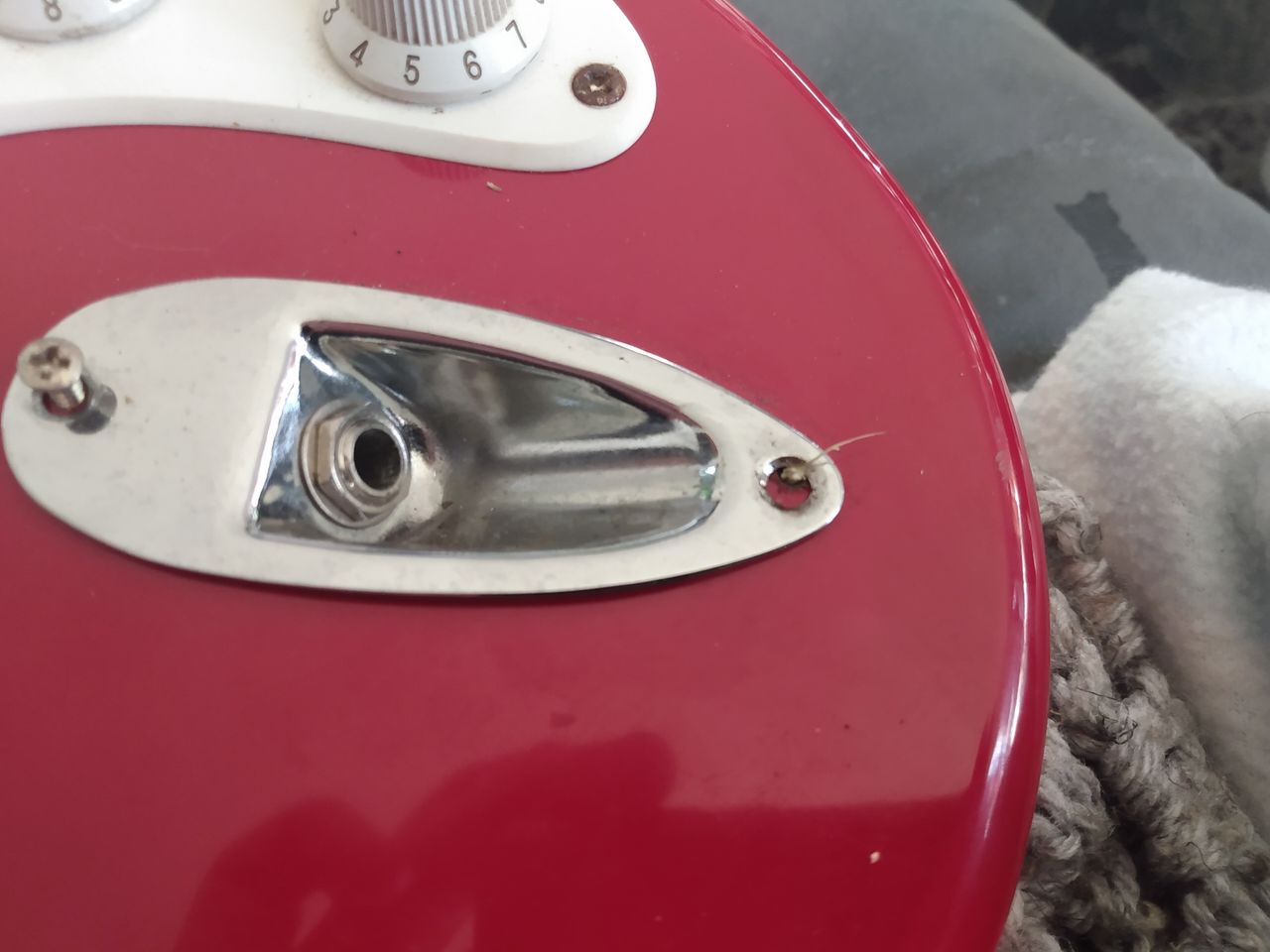 And just like that, this one was ready to play! It only took two years for me to get around to it. 😏 I hadn't been playing too much since losing almost all my gear in a nasty separation, but now that I'm getting a little studio room put back together, I've been feeling that itch. Maybe by this winter I'll have a little music to post. (Imagine a 'fingers crossed' emoji here, I'm not going to spend 5 minutes looking for it :) 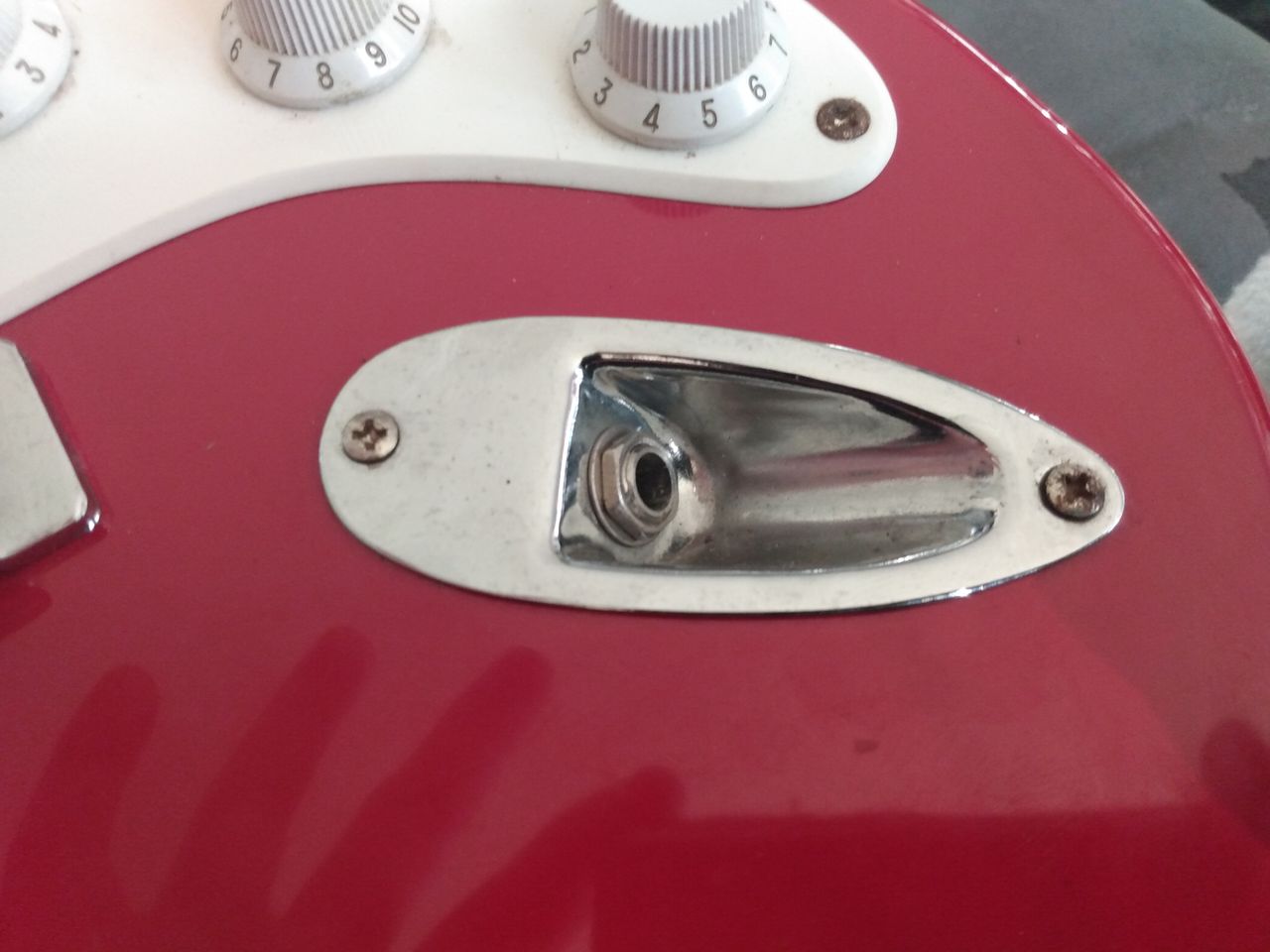 Do you have a favorite guitar you've brought back to life, or even just a favorite instrument? Tell me all about it! I haven't talked much music shop on this platform yet, but I'm always eager to have that conversation! Give a follow for more miscellaneous repair tips, give a vote if you learned something, or just liked the soothing song of my sentences. If not, no love lost, I'll still be wishing you well and seeing you around!