There are a lot of things that people can do terribly wrong when they are cheaply traveling the world but I think this one goes to the near top of the list in my book because I have seen it go terribly wrong for so many people in my 20+ years of moving around the world.

It is no secret that drugs are far more available outside of the western world than it is inside of it and I have been in places where they don't even try to hide the fact that they are selling various drugs.

Especially if it is a beach area, it doesn't really matter where you travel to in the developing world, you can go ahead and plan on being pestered constantly by beach hawkers. 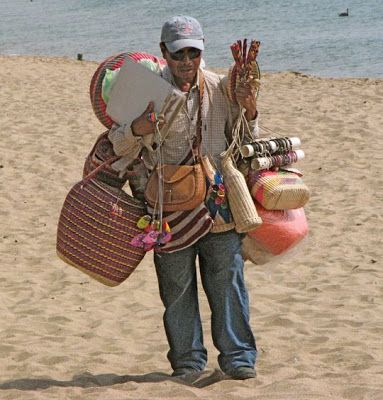 I've seen it all over the world and sometimes it was in surprising, out of the way beaches where literally no one else was around but I guess this guy, who was selling necklaces, jumped out of a tree and wandered down to our area and absolutely refused to leave even though we were all completely uninterested in buying a necklace. Then he switched gears and had another stash of goods, he had a bag of weed, some hash, and small bags of cocaine as well.

My friends, after some negotiation bought basically all of this stuff and while all of the products were legit the coke put my friend who bought that baggie, out of commission for several days. I don't think this was because it wasn't real, I think it was because it was TOO REAL. Did he have a great time that day? Yeah of course he did, there's a reason why cocaine is very popular all around the world. He wasn't himself the rest of the day though and he started making a scene everywhere we went. He then later went out in search of more coke and because of where we were, this was not difficult to accomplish although he did get reprimanded by a bartender for asking too loudly about it.

He did too much and didn't join us on our adventures for the next couple of days while he recovered. Even though the drug itself was cheap compared to USA prices, he still went over his budget like 5x per day because not only was he buying a "loudmouth drug" but he was also spending with reckless abandon.

That story doesn't have a too terrible ending but this was a minor one. There are more stories.

I would say that of all the places I have been, nowhere has had a drug culture on such wide-open display as it was in Laos. There are bars that literally have menus that show the various drugs that they have for sale. 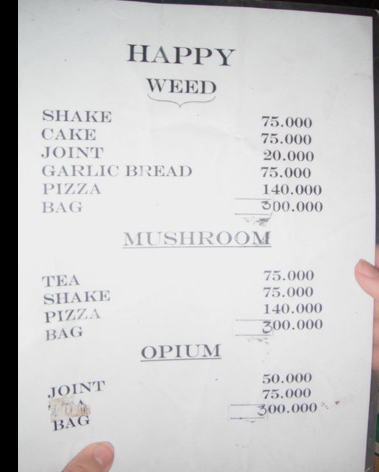 I did not take this picture but trust me when I say that it, and menus very similar to it, are basically everywhere. I've never been much a drugs guy but I do have a puff on a joint every now and then. These places though, have people passed out all over the place and it's kind of disgusting to see it. It's just a "restaurant" filled with passed out backpackers who are doing opiates. Now maybe that is fun for some people but for me it seems like an excellent opportunity to get robbed.

Let's also look at the fact that opium is incredibly addictive and I have heard stories of people who had big plans to travel all over Asia but instead their vacation consisted of sitting in an opium den for months just doing that, over and over again until they ran out of money and had to beg mommy and daddy to send them more money for a flight ticket home. In one situation there is a guy i met that did precisely what I said and then spent the flight money not on a flight, but on more opium. I don't know what happened to that guy but he almost certainly eventually returned home but now with an addiction that he can not feed in his home country. He probably ended up ruining his life. 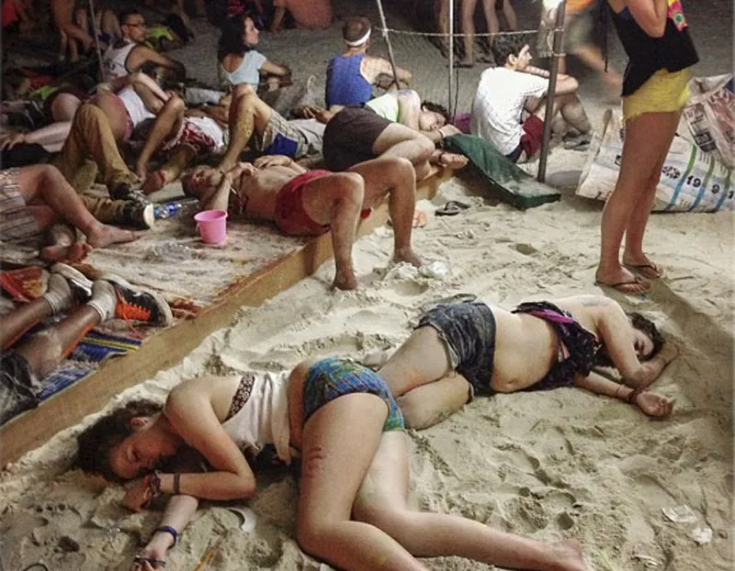 Then there is the famous Full Moon parties in Koh Phangngan in Thailand. I have been to a couple of these and after a certain point in the night the beach is riddled with people that are passed out from a variety of mushrooms, opium, and molly. Search for "passed out full moon" and you will see a wide array of people that are out of their heads and passed out on the sand. A lot of the time people who are not that hammered (yet) are taking photos with the people. In more than one occasion there have been drownings where passed out people were lying down below the tide line and didn't wake up even when they started breathing in water.

Let's also not forget that despite the abundant nature of these products wherever you happen to be that they are still illegal and if the police decide to shake you down for it, you are gonna get charged a ton of money to get out of trouble. The police obviously don't care about the rules but they are going to take you to the cleaners and there are loads of stories of people paying outlandish bribes to prevent going to prison.... all because you got a little too crazy with drugs on vacation.

I'm not trying to tell people how to live their lives but I think it is important to think about why you are traveling in the first place: It probably wasn't to format your brain every night and never experience the glory that is other countries. If you want to have a bit of weed than go right ahead but making that the focus of your journey whether it is intentional or an accident - well, that isn't really traveling now is it?