Gifts of succulents, caudiciforms and bulbs and the things people never consider

In my country, it's illegal to collect plants from the wild, because there are many species here that have been removed till they are extinct in nature. The sad thing is that many of these plants don't survive being removed from their natural environment especially species like cycads and various succulents. You may still buy and grow them if they have been propagated by a nursery or if people were permitted to remove them because the land was being cleared due to housing development. Then of course, there is the traditional medicine trade. A certain friend of mine can't help himself, he justifies buying plants from traditional herbalists as "saving" the plants, even though this just creates more demand for their removal from nature. On Friday, I was given a little bag as a gift and my heart sank: the dilemma is now one of being made complicit - I can't try and give the plants back to the herbalists and I don't want them to die, so...

In the bag: I have no idea what this is, I know a little about traditional medicine that is used in the Eastern part of the country but I've never seen this. A man who works with me is from Northwest recognised it but couldn't remember the name, otherwise I could look it up and see how it grows. All I know now is that it comes from a summer-rainfall area so I can pot it up and water it and see what happens. The next one: sorry, I didn't realise I took such a bad picture, but that strange carrot is an ipomoea of some kind, so it makes a vine and has flowers similar to Morning Glory. It's probably Ipomoea cairica var. cairica which is both medicinal and edible and somewhat invasive so I'll try growing it against the back wall and we'll eat it if it gets out of hand. I'm curious to see what will sprout out of there. This dehydrated specimen is a member of the Huernia family although it's impossible to ID without flowers. Heurnias are usually used for magical purposes, they don't really have medicinal use but they can be eaten. Not going to try that! This one is fairly dehydrated but it should recover 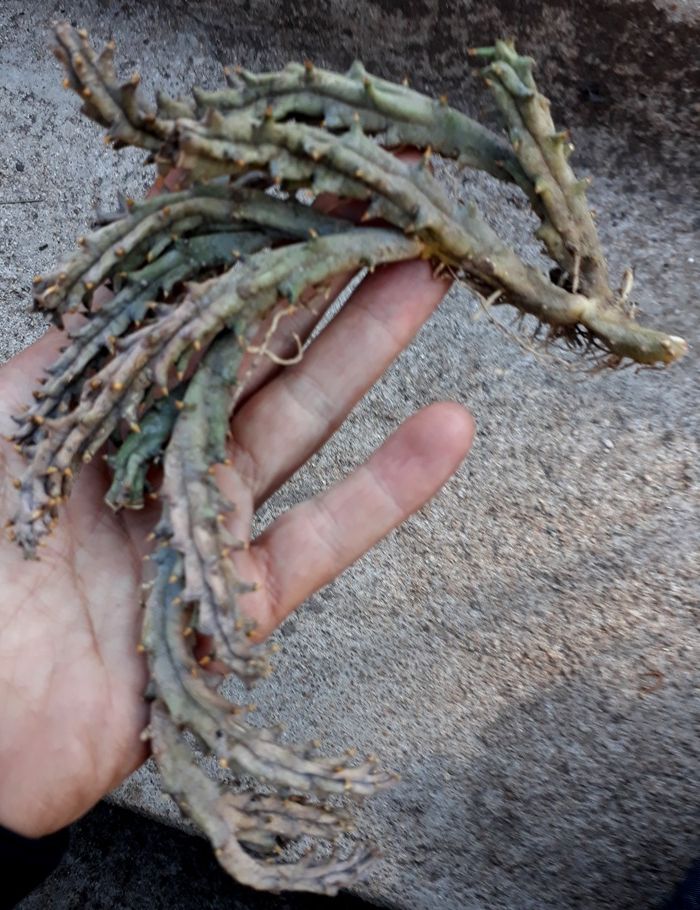 This plant bothers me most: it's a ground orchid, Eulophia cucullata, which is used as an impotence remedy and a love charm. They are fairly common in Eastern tropical Africa but they are not grown commercially because they are notoriously difficult. This is because this plant relies heavily on mycorrhizal fungi to get its nutrients. Mycorrhizal fungi form a network of filaments that associate with plant roots and draw nutrients from the soil that the root system would not be able to access otherwise. This fungus-plant alliance stimulates plant growth and accelerates root development.
It makes the plant less susceptible to soil-borne pathogens and to other environmental stresses such as drought. In return the plant provides carbohydrates and other nutrients to the fungi. They utilize these carbohydrates for their growth and to synthesize and excrete molecules like glomalin (glycoprotein). The release of glomalin in the soil environment results in better soil structure and higher organic matter content.
However, in soil that has been disturbed by human activity, the quantity of mycorrhizae decreases drastically so that there are not enough of them to produce a significant benefit on plant growth and health.
Source: http://www.mykepro.com/mycorrhizae-benefits-application-and-research.aspx

The roots you can see are dead and that won't stop the plant from sprouting, or making new roots but without the fungi, it will ultimately die. Unfortunately, there are many different species of fungi and this plant uses a very specific kind. These orchids are found in grasslands, in damper marshy conditions so I have planted it in local soil with compost and seeds from local grasses, which may help it. The rhizome is buried fairly deeply and I am watering it by letting the soil soak up water from the bucket but I am not optimistic. This is why you should never take plants from the wild, no matter whether you have good intentions. On the other hand, I do feel like I am saving a piece of this plant. This Ceropegia woodii or String of Hearts grows above the bar in a drinking hole up the road from where I work and they let me take one vine to grow. This one is easy to propagate if you have little tubers, as can be seen in the bottom right corner: you just place it on damp potting mix and it will form roots I was visiting a local nursery and was given this little Agapanthus nana, it wasn't doing that well after all the cold weather and he had others so I was told I could take it. I'm really partial to the dwarf species and they flower well if you grow them in pots. Plants that are commercially cultivated are not only grown for their looks but also for the fact that they grow easily in a wide variety of soil conditions. There are many beautiful plants in the wild that just cannot make that transition and it's best to leave them in nature