Have You Listened To Hämatom - Berlin?

When asked what kind of music I usually listen to, I will answer with "If it has guitars in it, I will most likely enjoy it". Over the years, I've found this to be a lot easier answer than actually discussing all the different styles I do and don't enjoy it. As a bonus, people will usually accept that answer and move on from there. Nevertheless, it's a quite fitting answer as well as I enjoy almost anything from Pop to Rock, Punk, Ska, or the most extreme forms of Heavy Metal - as long as it's good, although that's always very subjective in itself obviously. When I was a teenager I've been deep into Heavy Metal and almost exclusively listened to that kind of music. As I've grown older, I've started to appreciate different music as well. Maybe it's because of that I always love it when Metal Bands do something completely different. One of the most recent examples is the current LP by Hämatom called Berlin (Ein akkustischer Tanz auf dem Vulkan). 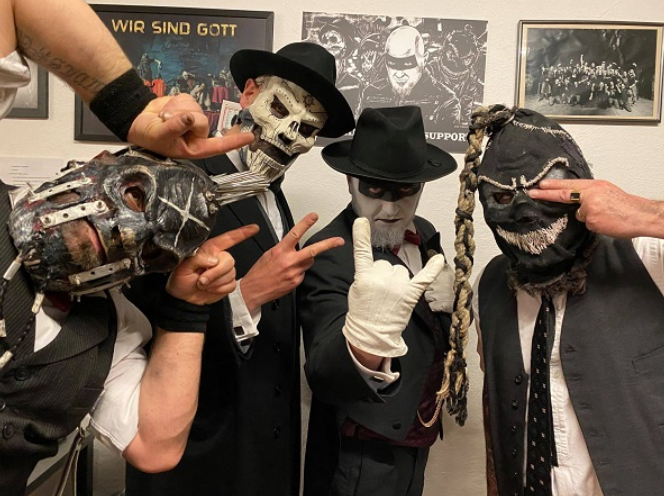 Image taken from the bands homepage

Hämatom (hematoma) is a German Heavy Metal band founded back in 2004. Their style is somewhere between Neue Deutsche Härte (think Rammstein) and more classical Heavy Metal. They are probably most known for their unconventional masks that they will wear whenever they attend any public event. At the same time, the band members are only known as North, South, West, and East. According to the band itself, this is done in order to fully focus on the music itself and to not get distracted by anything else.

While I somewhat like their self written songs, I've always been a fan of the cover songs they have on a lot of their albums. Hämatom enjoys playing other genre songs in a more Metal style. While this is not unusal, the songs they choose to cover are somewhat unconventional for a metal band. More often than not, they'll end up performing German Hip Hop and Electro songs. Not just that, though, they don't shy away from performing these songs life and together with the original artists either. One of the most memorable instances of this has to be their live performance of Bleib in der Schule together with Trailerpark at Wacken. Bringing a Hip Hop crew to the greatest Metal festival in the world certainly is something not many bands will dare to do - and the audience loved it!

I've been quite excited when Hämatom announced that their next album was going to be an acoustic LP which was going to be something completely different. They held more than true to that as Berlin (Ein akkustischer Tanz auf dem Vulkan) is not just an acoustic version of older songs but completely new songs done in the style of the late 1920's which was a quite interesting time, especially for German music. Consequentially, the songs aren't quite as hard as what you are used to from the band and focus a lot more on more classical instruments.

Here are the songs from the album:

What I like most about these songs is that they at the same time stay true to what Hämatom is usually doing but don't sound like Hämatom at all. Most of them are great to dance to and just make you want to move. The lyrics are still pretty dark, ranging somewhere between excessive drug and alcohol abuse and rather melancholic songs. One of my favorite songs has to be Tanz auf dem Vulkan which you can check out in their official music video over on Youtube

They've also managed to sneak in a cover again, although it's more of an interpretation than an actual cover. The 4th song of the Album - the name giving Berlin - is a cover of Dolly Parton's Jolean. Instead of singing about said lady, though, they describe the German capital city, both talking about its long history and the state it is in currently. The whole song works surprisingly good and certainly is one of the album's highlights.

Talking of highlights, another song I really enjoy is Ein Herz Und Eine Kehle which is a quite clever play on words which only works in German, though. Ein Herz und eine Seele is used to describe two persons who are really close together. By replacing Seele (soul) with Kehle (throat) it suddenly is about a person going around at night, seducing and later killing lonely women. The lyrics are dark, harsh even, but they work amazingly well. The song itself sounds very cheerful and if yo don't know or don't understand the lyrics, you'd never guess what it's about. Since the band thankfully provided all the songs on Youtube, you can listen to it here.

All things considered, Berlin (Ein akkustischer Tanz auf dem Vulkan) is an amazingly well written album with a lot of memorable songs. If I was to tell anything negative about the LP it would be that it is rather short. With only 10 songs and a bit more than 30 minutes of music, it's a lot less than what you'd expect from a Heavy Metal band. On the other hand, though, I'm glad they settled with only delivering quality songs instead of doing some more filler songs which just wouldn't work. Next week, I'll be at a life performance of the album and I'm really looking forward to it.

And that's all from me for today! I have been wanting to write about music for quite some time now and I have to admit, it's harder than I expected. I hope it was still somewhat enjoyable to read, I certainly enjoyed writing it and I'll improve with each article I do on the matter. So thank you all for reading and see you next time!