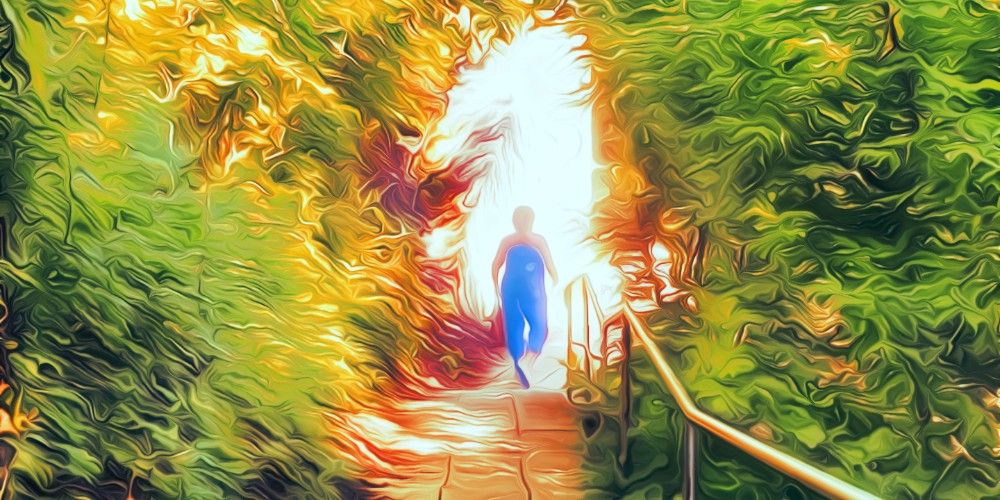 I was walking down my street one evening, and an elderly couple who were obviously from out of town asked for directions. They were driving a white Toyota Corolla rental car.

"You are on Main Street right now. You have to turn left, and go down Maple Street to Pearl Avenue. From there you just keep going straight, and you will find The Source."

They thanked me, and went on their way. I idly wondered why a couple of elderly tourists would want to visit a small new age shop in the suburbs. How did they even know about it, for that matter?

I went home, and forgot the strange incident temporarily. The next day, I went for my usual walk. The same white Corolla was parked in the driveway of a house which had a large for rent sign staked out on the lawn.

Curious, I walked up to the door and knocked. The same lady answered the door.

"Welcome to the neighborhood!" I said, giving my brightest smile.

"Why thank you, young man. Aren't you the same one who so kindly helped us yesterday?" She asked, smiling.

"I believe so, young man. I believe so! Won't you come in for some homemade cookies?" She asked, smiling even more.

For some reason, alarm bells went off. I took a step back off of the porch, and fumbled an excuse about having to be somewhere.

She nodded. "Maybe another time? I really appreciate the help you gave us yesterday."

"Of course. Thank you very much for your kindness." I said, regaining my composure. I felt rather foolish, but decided to trust my instincts and not take her up on the offer.

I didn't knock on the door again, but the older couple seemed to be settling in. I would see one or both out gardening now and then, and I would wave and say hello as I would walk by.

One bright and sunny day about a week later, they were trimming the hedge by the sidewalk. Mr. Harris, as his name turned out to be, was taking a break. He took a rather large coin out of his pocket and began tossing it high into the air, expertly catching it as it shot towards the ground. He seemed to be whispering something as he did so.

Both Mr. and Mrs. Harris had their backs turned, and didn't know I was there. Just before I was about to greet them, and comment on his skill, I tripped. My shoelace had come undone.

"We talked about it, we don't have a choice." She said angrily.

"I just can't do it." Said Mr. Harris, as a middle aged lady in a bright blue pantsuit strolled by, admiring the nice garden which had seemed to sprout overnight.

"Well I can!" She said, snatching the coin which he was nervously tossing in an erratic manner. She then began doing the same high tosses and whispering that Mr. Harris had done before.

I ducked behind a bush. A jogger went by at a good speed, before I could even think about stopping him. Mrs. Harris tossed the coin on to the sidewalk directly in front of the jogger. The trees, jogger, and everything else began to swirl. There was a bright light. The jogger disappeared, and Mrs. Harris clapped her hands in glee.

She then retrieved the coin, and placed it directly in the middle of the driveway. Mr. Harris, looking defeated, followed his wife into the garage. The white Corolla emerged, with both of them in it. When it rolled over the coin, there was more of the mysterious light and swirling, and the car and its occupants disappeared just like the jogger.

I waited a few minutes, stunned. Then I carefully approached the coin, first throwing stones towards it. When I was within a few feet, I poked it with a stick. Nothing happened. I picked it up, and examined it. It was old, and had strange writing on it.

I put the odd coin in my pocket, and went home. I tried to convince myself that it was just another day on Main Street... But I had a feeling that nothing would ever be the same again...