Writing Tip #12: Reveal Everything and Nothing 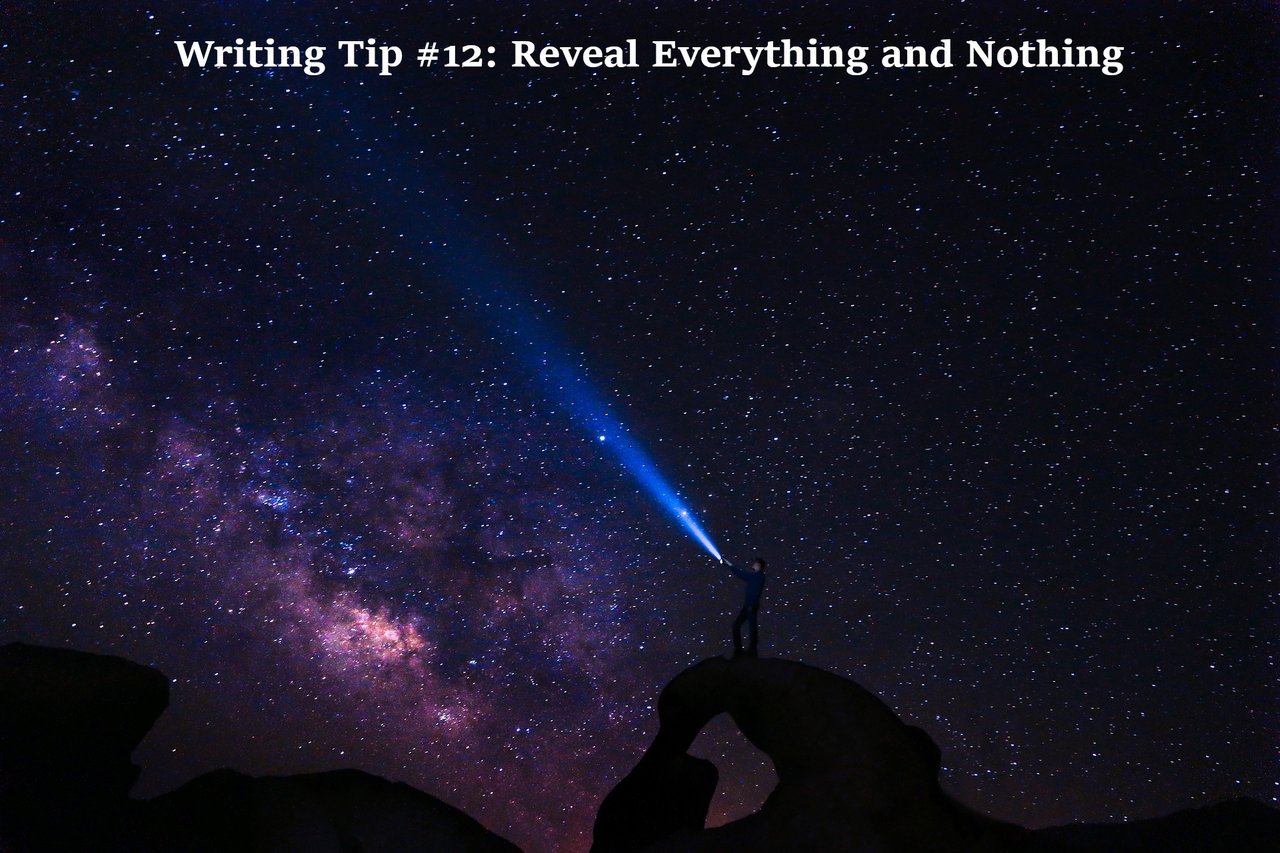 Stories unfold in many different ways. A critical decision you must make when you write fiction is what to reveal and when.

From a simplistic point of view:

Withhold information from your readers. When writing fiction, only give readers the information they need to know in the moment. Ernest Hemingway’s iceberg theory in writing is to show your readers just the tip of the iceberg. The supporting details—like backstory—should remain unseen, just like the mass of an iceberg under the water’s surface. This prevents readers from getting overwhelmed with information and lets them use their imagination to fill in the blanks.

What he is saying is that the information you provide helps the reader to see the full picture. This is what I mean by "reveal everything and nothing." Only include the details that are critical to the story, and only when they are needed, and let the reader fill in the rest.

This makes so much sense when you think about it. When you first get interested in something, it is likely because of the highlights, not because you read an in-depth report.

A good analogy is when you go to visit a relative who starts talking at length about the past and showing you stacks of picture albums. You might try to listen politely, but pretty soon you may feel so overwhelmed by everything the relative wants to show you and tell you that you may want to run away.

Great storytellers tell you just enough to get you intrigued, and then they keep dribbling out the deeper details and backstory (if needed) once they have you on the hook.

How to Reveal Everything and Nothing

The most effective storytelling says an amazing amount about a character without saying it. For example, it might show the twitch of an eye to indicate a person is nervous, or a blushing face to show that a person is embarrassed, without providing an explanation about the twitch or the red-tinged cheeks.

This is the essence of the expression, "show, don't tell." (Be sure to read Writing Tip #5, which is all about this concept.)

It is actually important to reveal plenty, but without making it sound like documentation or a legal treatise. As the writer, you have an obligation to help the reader understand what the story is about, and why this particular character is being introduced to us at this particular juncture.

For example, the reader needs:

Let’s try this out. I’m going to write two passages about the same character. One will reveal many things immediately. The other will infer the backstory.

Johnny McGregor was very smart. He got straight As when he was growing up, much to the delight of his mother, who always wanted him to become a world-renowned scientist. He spent all of his time throughout childhood performing scientific experiments, gazing at the stars through a powerful telescope and writing down scientific observations about beetles and insects. In addition to his studies, Johnny began writing scholarly articles about his experiments and sending them to reputable scientific journals at a young age.

It's really rather boring, isn't it? Now, let's try again, but get into Johnny's head a little more to see what he's thinking.

When Johnny McGregor looked out at the night sky, he didn’t just see stars. He saw white dwarves, red dwarves, blue giants and black holes. Back from Harvard for the winter break, he stood in his childhood room, looking out at the mesmerizing winter night, surrounded by his rock and beetle collections, and wondered if the terrible secret experiment was still where he left it all those years ago.

I've attempted to show, in two short writing snippets, how your writing can deliver details in very different ways. The first pretty quickly makes us lose interest because it’s just details, whereas the second method weaves in only the most important of those details in a storytelling style that gets us into the heart of the tale.

We don't have to be told that Johnny is smart, and that he loves science. The details make that clear. And we can see that the fact that he's into science is a part of the plot of the story. We also know why this story must be told now: because something is going to happen that is related to an old experiment that has somehow remained hidden for many years.

I hope this is helpful to you. How do you share details in your stories so you keep the reader’s interest and move the story forward?

@jayna, writer and moderator at The Ink Well.

If you're looking to up your fiction game and reach that next level, check out my past writing tips linked below.

Writing Tip #1: Writing from a Prompt

Writing Tip #3: Writing What You Know

We would like to invite lovers of poetry and short stories to visit The Ink Well, a Hive community started by @raj808 and run by @shanibeer @stormlight24 with support from moderators including @carolkean and @jayna.

Also, with the advent of https://hive.vote/ it is now possible to follow The Ink Well curation trail on Hive blockchain. It works just the same as steemauto; simply navigate to the curation trail section and search for theinkwell (all one word with no @ symbol) and our trail will pop up as an option.

Similarly delegations are possible on Hive using the fantastic https://peakd.com/ Hive Blockchain front end. If you wish to delegate to @theinkwell that supports creative writing on Hive by voting all of our contributors, you can do this from the wallet section of https://peakd.com/