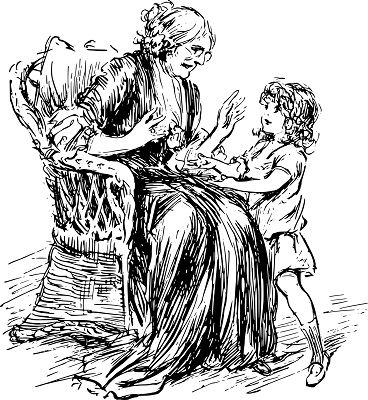 Sometimes, when she woke up in the morning, it felt like bile was in her mouth. This had gone on for years, ever since she was sixteen and found out what the McCreadys had done to her great-great grandmother.

They owned the largest plot of land in the valley. They were on the school board, the town council. They ran everything. It started way back then, when her great-great grandmother was cheated.

Recently the weight of this wrong had been pressing painfully on Clarissa. She saw it in her brother, also. The subject was so bitter in the family that they didn't have to address it directly. Whenever some said her, or them with that particular acerbic tone and hard face, everyone knew. It was a McCready they were talking about.

Once Clarissa had tried to get rid of the bile by talking to a therapist. She thought, Maybe I can find a way out of this. The therapist was no help. Her advice: Let it go. Enjoy your life today.

What a waste of money that was. Clarissa wanted a way for the family to somehow get justice.

This morning the thought of that therapist angered her, almost as much as the memory of the wrong done to her great-great grandmother. She went down to breakfast where her children were already chowing down dried cereal and milk.

Clarissa had planned to make scrambled eggs and pancakes, but could not summon the energy to do that. So many mornings this was true. Instead of energy there was the taste of bile, and a darkness that kept her in bed.

"Good morning, girls," she greeted her daughters. "How are you all today?

The girls looked at her with what seemed to be caution.

Her oldest, Anitha, asked, "How are you Mama? Feeling any better?"

"I'm fine. Just thinking about, you know...everything. I want you girls to promise me never to forget. That's one promise I made to my mother and I hope you can honestly make it to me. Never forget. Never forget what those McCready's did. All they have. That's ours by right."

The children regarded her with unreadable expressions. Anitha spoke first.

"We know, Mama. That is our duty. Remember. Never let go. Keep the memory alive until justice is done."

Clarissa felt comforted by her daughter's words. The same words she had said to her mother all those years ago. What a burden that promise had become. And yet, there was no escaping it. Until the McCreadys were vanquished, the family had to remember.

Clarissa took a bowl out of the closet. She was going to have cereal. But then, the bile rose up. She lost her appetite. Again. She put the bowl back.

She left the kitchen, her slight figure--which had grown ever slighter lately--disappeared into the dim light of the hallway.

This story was written in response to this prompt:Something sinister is passed down through the generations in a family, and everyone is powerless to stop it.

It seems to the family they are powerless to stop the hatred and resentment that has been passed down for generations.