The Inkwell Prompt # 34/ The selection of Celtic witches 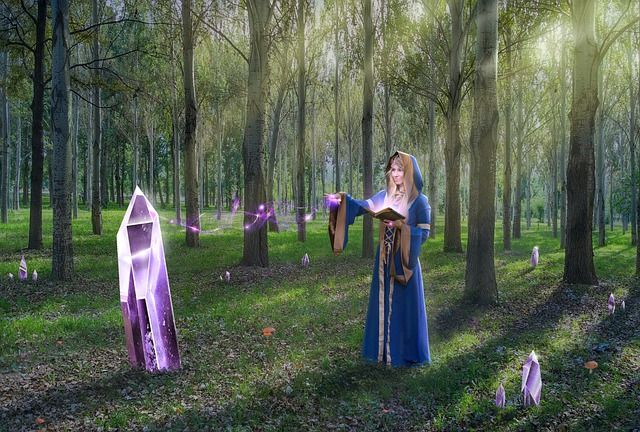 In the Smith family, a native of the island of Ireland, there was always a witch for every generation. It seemed to be a condition inherited only by women. This was known only to the members of the Smith family. Of course, when one of them married, she shared this secret with her husband, who would have to keep silent until death. They usually used their incantations to find suitable suitors for them ........ Then they would select two of them. Of these, one was chosen for the love he showed....... That was a prerequisite..... they had to achieve without using magic.

Apparently these gifts began with a famous 15th century sorceress. Lady Margaret Owen. Mistress Margaret possessed the gifts of healing the sick, or so she believed; but the magic that always proved to those who came to her for information and advice, was that of knowing hidden secrets about people.

Margaret was always ready to heal the sick. Many times outsiders saw her, in the forest, talking to the plants. The plants communicated their healing properties to her. This brought her unexpected fame. This fame reached the ears of Queen Elizabeth of York, who requested her services.

Margaret arrives at the Palace and the Queen ushers her into one of the rooms. There, she puts the situation to her.

-Margaret, I need a drink, urgently, from your plants. I have been feeling ill and because of that I have not attended to my conjugal duties. My husband, King Henry VII, is very passionate ..... you understand me, you are a woman - says the Queen.

To which Margaret replies:

-Yes, your Majesty, I understand...... I will prepare a brew for you and when it is ready I will bring it to you personally.

So she did. She went to the forest and her plants told her their qualities, except for one, with red flowers, which she mintió........

Margaret prepared the concoction and took it quickly to the Palace. She delivers it personally to the Queen and says to her:

-Your Majesty, take this potion for three consecutive days. On the third day you will see its effects.

The Queen politely dismissed her. Margaret left the Palace and went home. The Queen never obtained the benefits of the incantation. Embraved, she requested that Margaret be imprisoned.

After 6 months in prison, the Queen again requested Margaret's services. The King was missing and wanted to know if he would return alive.

Margaret agrees to her request. She concentrates and tells her:

-Yes, he is just out hunting with his friends. He will tell you that he had to attend to a matter about weapons. He will be back in 15 days. Don't worry, His Majesty the King is completely faithful to her.

After a while, the sorceress's words were verified. The Queen was very pleased and sent for Margaret's release; and to protect her, she changed her surname. From now on she would be Margaret Smith. This surname would continue to be used from generation to generation, leaving the Owen surname in the past

This story was told from generation to generation, as well as the rituals to identify the new sorceress of the family. This was presented on the 7th birthday of the girls. The birthdays had, as an indispensable requirement, to be celebrated on the island of Ireland, from which they originated. Also, within the other protocols, a conjuration had to be performed on the birthday cake. This was done by one of the sorceresses on duty. The effects of the spell would only be obtained by the new sorceress or sorceresses..... Each girl celebrated her birthday.

Even in the 21st century, some of the older ladies of the Smith dynasty found it illogical to perform the transfer on the day of the girls' birthdays. It was too expensive, so in order not to lose the tradition, they decided to hold a conference via the Internet. There they would discuss solutions and decide by majority vote what would be done. They would meet at the next new moon, which they considered ideal for new beginnings, setting intentions and planning.

The appointed day arrived, they all met as planned. In that get-together they decided by majority that once a year they would celebrate birthdays. They had already checked that no girl had a birthday in December, so the invitation to celebrate was for November, in the lunar phase of the fourth crescent. With this they would reinforce the growth of the new sorceresses, as well as their creativity, and get the strength to fulfill the mission of life that each one of them had to fulfill. In addition, they had already selected the witches who would cast the spells for the cakes. Each birthday girl would blow out the candles on her cake.

With everything decided, they sent out the invitations. The year 2021 would be special for the girls. There would be surprises....

November came and they all moved to Ireland. They stayed in an old community so as not to arouse suspicion. The celebration coincided with the day of Samhain. They would gather in the evening in the nearby countryside. There they would share a simple Irish potato pie and then the famous cakes. Each cake was decorated differently, but with Celtic reminiscences: leprechauns, shamrocks, the Celtic cross and emerald green icing, along with Celtic knots and scriptures that created a distinctly Irish atmosphere.

All the ladies of the Smith family arrived quietly. That year there were only 10 birthday girls. The appointed time came for each one to blow out the candles and bite her cake. They would all do it at the same time. It was there that it would be revealed who would be the next sorceress or sorceresses.

The girls knew nothing of what would happen to them after the cake-biting........

Suddenly Moira speaks:
-Mom, I'm listening to God Lugh. This is exciting, I never thought it would be like this.

-I'm seeing elves and fairies. I've never seen them before.

Then Saoirse begins to dance and says in the distance:

-I'm listening to the sounds of nature. They have power.....-

-Does anyone else have a different feeling? Shaila asks

-Yes, Aunt Shaila. They gave me directions on how to use the plants and precious gems. They are going to take me to Avalon when I am asleep. There they will train me for my mission. -Muriel answers

-Well, this year was wonderful for the Smith family. We are thankful for everything that has happened. Tomorrow we will go back to our usual life," adds Sheila.

And so the future Celtic witches of the Smith family were chosen.

The selection of Celtic witches © 2021 by María del Carmen Sánchez