If You Go Looking For Trouble | The Ink Well Weekly Fiction - Week 2 - Prompt: The Moment When 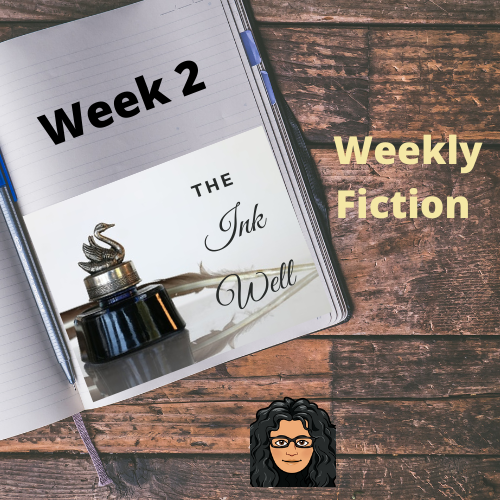 Image created by justclickindiva in Canva utilizing its free bckgrnds

The Ink Well Weekly Fiction Prompt #2: The Moment When...

Prompt: The Moment When... 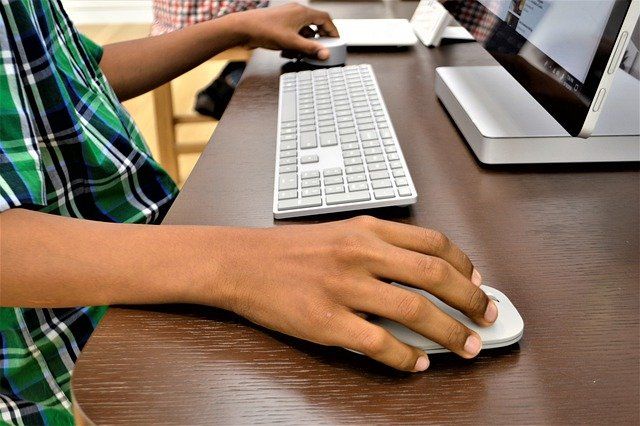 My name is Lionel Ballister. Up until Monday, two weeks ago, I was an only child born to a middle-class couple, living in a middle-class suburban neighborhood, and looking forward to weekends having fun with my friends.

One moment I was sitting in my comfortable bedroom in the loft. The next, I was being handcuffed and placed inside a squad car accused of being an accomplish to unthinkable crimes.

How I got to that point in the span of two weeks is textbook stupidity.

Why? Because at the age of 15, there was no excuse. I'd heard everything there was to know from my parents about the dangers posed by engaging with complete strangers over the internet.

But I couldn't stop myself.

Monday night. Dinner over, I grabbed my soda and headed upstairs to complete my math homework. I sat staring at my laptop to find inspiration for Geometry. My memorabilia, a testament to my mom's generosity, stared back at me from behind. I looked up to see my football quarterback fat heads on the wall cheering me on.

With all that encouragement, I logged on. I didn't immediately see the chat notification. I opened the message thinking it was a friend.

"HELLO, my boy. I know you won't remember me, but I'd like to talk to you. Please accept this invitation." That should have triggered an alarm. However, I ignored the message, but didn't delete it. Homework finished, I went to bed.

It was now Thursday night. I had gone about my normal routine knowing in the back of my mind I had to make a decision whether to respond or delete the mysterious message. During those three days, I couldn't remember having met anyone recently I didn't know.

Then I did what no child should do. I clicked "ACCEPT".

The next statement was one that would forever change my life.

"I'm your biological mother." The mystery person on the other end of the message then typed a telephone number to call so she could prove it.

I was shocked. I didn't know whether someone was playing a prank on me; whether it was a man pretending to be a woman; or a predator. But for some reason I couldn't explain, I knew I was going to call. I backed away from the desk and flung myself on the bed, staring at the ceiling.

It never occurred to me to tell my parents.

Saturday came. I'd waited two days and couldn't stand it any longer. I rose early and shut my bedroom door. My fingers shook and my heartbeat overshadowed the shaking inside as I tapped the keypad. The voice on the other end sounded light and pleasant.

"Who am I talking to?" I said, then couldn't believe my next words. "I mean, I'd like to speak with my mother."

"Who are you? the pleasant voice responded.

"I'm Lionel." If this was a game, I was going to find out who this person was.

"I bet your last name is Ballister. I bet you got freckles like me. I bet your hair is red. And, I bet you got a birthmark on the inside of your upper thigh." The woman laughed, then continued, "birthmark just like your dad."

"What do you know about me and my dad?" My voice was high pitched. I fought back tears as I didn't want this person to know I was scared. No one knows about our birthmark. I never had a feeling anything was wrong in my life. But now, I felt something was. And this person now had my mobile number. This was the first time I thought that my parents and I might be in danger.

"Meet, and I'll explain." Click. Just like that, she was gone from the line. But not from my mind as I paced the floor.

That night I tossed until I finally decided not to tell them. I wanted to find out more about why this person knew so much. I didn't put my personal information online like many of my friends did.

But how and where was I supposed to meet her and see the proof she had? I waited for her to call back.

The next Wednesday, she called. The Motel 6 location was not far, and I knew how to get there. I didn't want her to pick me up and find out where I lived. Also, I don't have my driver's license yet, so I mapped out the transit route.

I lied to my parents about where I was going and headed toward the bus. I passed the time clinching my firsts and cracking my knuckles to calm the throbbing in my throat. I couldn't stop asking myself how she knew my dad.

I'd never been inside a motel. I knocked on her room door. The woman who answered looked just like me. I stumbled back before she grabbed, pulled me in.

Everything was happening quickly, I couldn't think straight, and I couldn't stop staring at her. She was beautiful with freckles and long, red hair that flowed around her narrow face. The purple lipstick and long, fake eyelashes made her look like a cartoon character. not the kind of woman I thought my dad would like.

But when she opened her mouth, it didn't match her beauty.

"I'm your birth mother. Call me Maddie. Didn't they ever tell you about the adoption? Here, take a load off." She motioned towards the chair.

I looked around the small, cluttered space filled with take out cartons. Papers and photos were scattered on the nearby desk. A suitcase lay on the rack near the window.

"Would you like a drink?" She came and stood near me. Her heavy perfume made me sneeze.

"No, thanks. I don't drink." I watched her lean over and fumble inside the suitcase.

"I guess Fred raised you right."

I had lots of questions such as why now and why you waited so long to see me, but I didn't know how to start. Her rambling about threats, papers, the hospital, and my dad didn't help either. Then she threw her head back and let out a screeching laugh. I initially thought she seemed harmless, just a bit strange.

I couldn't pay attention because my head was spinning with this new information.

Two hours later, we both looked toward the door as it came crashing in. It happened so fast, I didn't know what to think or do, so I just jumped up and ran outside. I didn't get far as a police officer wrapped his arms around my waist before handcuffing me. I was going to jail. That's when I started crying. Nothing like this had happened to me before. I felt panic and fear, although I hadn't done anything wrong.

Numerous police cars with sirens had already filled the parking lot. Maddie and I were escorted to separate cars and taken to the police station.

I never saw her again.

My mom and dad arrived. Hours seemed to pass before they were allowed to take me home. My current ordeal was over; the case charge of human trafficking wasn't.

During the ride, we were silent. I was surprised they didn't scold me.

Once home, I headed to my room. I was dead tired, but couldn't sleep. I had to know what the muffled, but intense discussions downstairs were about.

I interrupted their conversation and handed my dad the birth certificate.

"Yes, son." Dad looked at mom who had stepped away from his side.

"Son, I'm not your biological mother, mom said quickly. I'm the one who didn't want you to know."

"But she said things happened like threats, papers, and the hospital. What was that about?" I had a feeling there was more.

"Tell him Fredrick." Tears strolled down mom's face as she turned away.

"I'm the one at fault here." I wanted to tell you just so this exact thing wouldn't happen. You'd be warned against association with her. My brief affair almost ruined our marriage.

I listened to the story of my dad's encounter with Maddie. This sort of thing happened to other people in the movies. I felt he still didn't give all the details. I also felt bad for mom, even though it was 15 years ago.

"So you cheated on mom?" were the only words I could think of.

"Yes, and I've been grateful ever since that she's still here with us. Maddie is your biological mother. We can't change that. But you have to recognize the type of person she is. She signed her rights away to ever be a part of your life. In the hospital, she agreed to take the money. We never saw her again. That's when your mom and I decided to go ahead with the adoption."

"Son, after all this time, what did she want with you? mom asked.

"She said we would leave and start a new life together. I could help with her work."

"Do you understand what she's involved in?" dad looked worried. I satisfied him with a nod I understood how dangerous Maddie was.

"When did you realize she was only setting you up to be a part of her illegal operations?" I guess dad wanted to make sure I understood.

"It was the moment when I saw the officer with "DEA" written on the back of his jacket lead her from the motel room in handcuffs. That when I yelled for him not to treat my mother like that because I wasn't being kidnapped.

But then another uniformed female officer rushed over and guided me a few steps away from the scene, then told me that Maddie claimed she didn't know me.

Even though I really didn't know anything about her, I felt betrayed and confused to why she would say that. The officer was trying to talk to me in a soft voice as though I was not thinking clearly. I called to Maddie, but she didn't look at me."

I then told mom and dad that the female officer said I was one of the lucky ones. I tried to explain to her that Maddie was my mother. She said usually they all instruct the kids to say that. In my case it was true, but no one believed me. It was the scariest and strangest day.

"Your ordeal is over now. You're home. and she's in the hands of the authorities." My dad opened his arms. Both mom and I entered. I was about to be 16, but I was so happy to be home, I couldn't hold back the tears.

Yes, I'm home now. I'm still processing what I learned, and how I had to find out the truth about my parentage. But what a fool I'd been to allow myself to be lured away from the only people who loved me. I also realize that other kids are not so lucky and end up victims of online scams and predators.

That night I thought about moving forward from this. It taught me a lesson. I wanted to make a difference. Yes, they told me I was lucky. Millions of others haven't been or won't be in the future.

My mom would always say that sometimes good things come from bad situations. Finding out about my real mother was nothing compared to learning a lifelong lesson in deceit.

The next Monday marked two weeks since my sort of growing up. I asked my parents, and they agreed that I could work in a supervised setting with the young adult division of the police department to help stop this kind of online scams.