The Ink Well Prompt #19: The Company We Steep 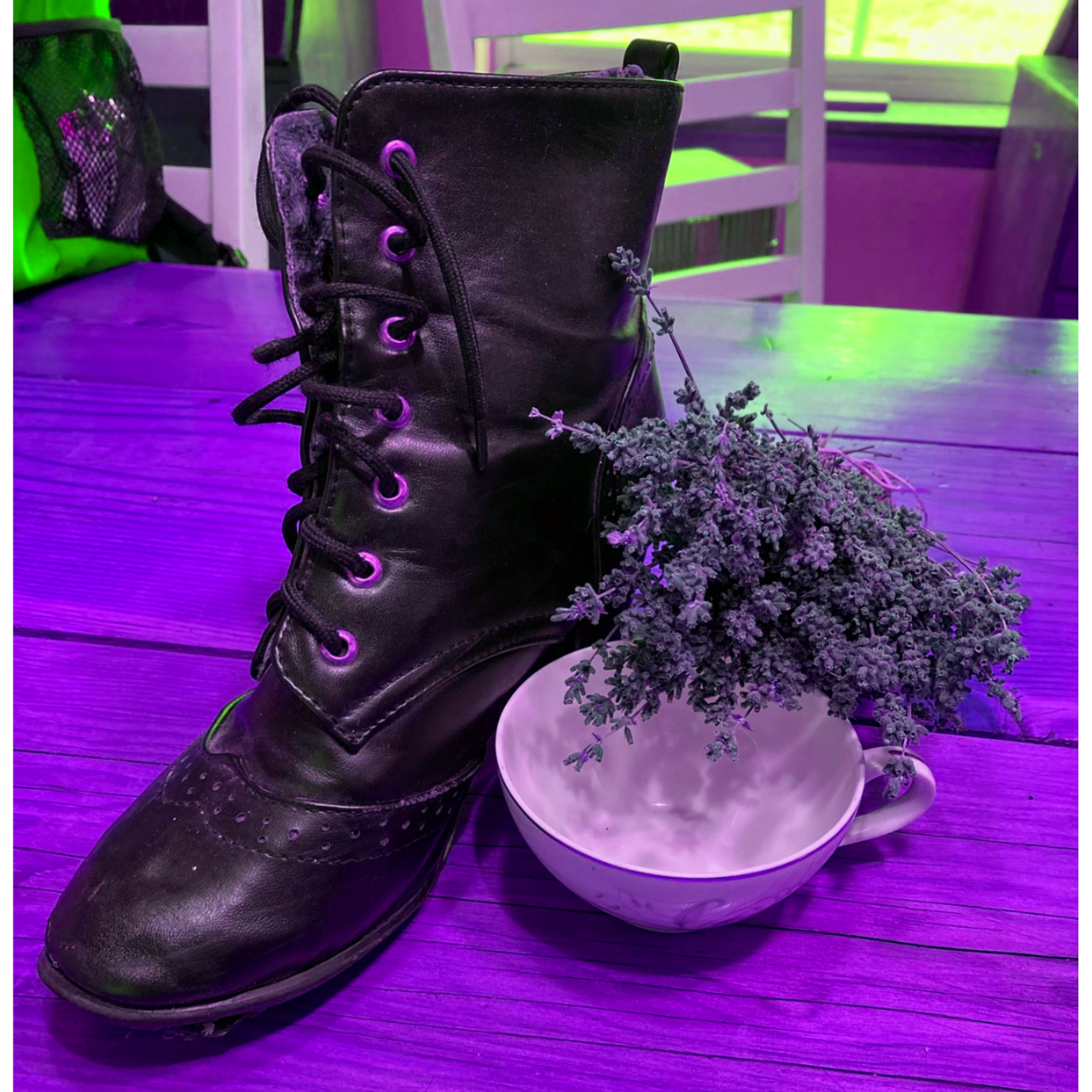 Philomena Musterdram smoothed her paisley skirt down as a fickle gust of late spring wind swirled through her legs. She'd been fighting a battle to keep her dignity intact ever since she stepped out of the front door.

Bertie Bellancourt had been Mena's best friend since the first day of fourth grade. She'd never forget or fail to smile as she thought about the day she stepped into Mrs. Pratt's class and was promptly hit in the chest with a sponge filled with purple tempera paint by Dara McKee. Standing there with paint dripping down her favorite horse sweatshirt while getting called "owl eyes" was one of the most humiliating moments of Mena's life. Dara, her grey eyes glittering with bully-tinged menace led the taunts, that is until a diminutive girl with black hair and even blacker eyes launched a green paint-soaked sponge right into the side of Dara's head.

"Green is definitely not your color," Bertie had squeaked, "I rather think poop brown screams, Dara, don't you?"

From that moment onward Bertie and Mena were a duo, united in all the best ways of friendship.

"Seriously though Mena, she has hated our guts for years! She's got to be plotting something. I'm almost afraid to eat the food. Almost." Bertie prattled as they strode toward Constance.

Constance was Mena's 1968 Oldsmobile 442. Constance was so named because she was in constant need of fuel to feed her always thirsty V8. Mena had to grow an extra row of gladiolas in her market garden to feed Constance's perpetually hungry engine, but as she took in her car's purple metallic flecked paint, she felt the extra work was beyond worth it.

"Come off it Bertie, I doubt we are important enough to warrant a proper poisoning. Dara probably just wants to show off in front of her, so the more bodies in attendance the better." Mena replied as she slid into Constance's buttery soft leather bucket seats.

"Horsehair and meerkat despair!" Bertie ejected as she slammed the seat belt buckle home, "That harpy has it in for us! Why else would she invite us to a tea party with Samantha Brockton."

"Maybe because you own a moderately well-known production company, and I am unfortunately a somewhat famous novelist?" Mena replied with an arched eyebrow, silencing any outburst from Bertie as she turned Constance's ignition. All 400 cubic inches of engine exploded into action as Mena pumped the gas a few times to make her point before continuing, "All Dara cares about is notoriety, and if she can prance out the local who's who before our town's newest arrival, a famous lifestyle influencer of all things, then she will cement her place into the local hierarchy."

Bertie twisted her sherbet orange dress collar, "It's gonna be the first day of fourth grade all over again, just his time with petit fours and charcuterie boards, just you wait Mena!"

Mena chuckled and tucked a loose auburn wave that had come loose from her updo behind her ear. She slammed her navy blue Victorian boot down on the accelerator and felt mischievous glee flow from her steampunk-inspired corseted blouse all the way down through her gunmetal paisley skirted form.

Bertie resembled an elated corgi, her effervescent form pressed up against Constance's passenger window, a vision in sherbet-hued rayon ruffles. Her dark hair was cut in the same Cleopatra-esque blunt bob it had been since Mena had met her all those years ago.

"Oh look! There's Darcie Freen!" Bertie bubbled as they drove along Lakeshore Drive. Mena felt her lips twist upward, her friend's enthusiasm was infectious. Darcie had stuffed her voluminous form into a mint green frock that until recently would have looked very out of place in Spruceton.

A town born out of natural resource harvesting, Spruceton had been discovered by the wealthy and their ilk. Craft breweries and faux rusted, tin-lined boutiques had replaced the dive bars and diners that previously made up their former working-class burg. Mena knew change was inevitable, but a part of her missed their hometown's previous humble, unassuming aura.

Darci was a realtor who had transplanted herself into Spruceton in the first wave of imports as Bertie called the newcomers. Mena waved at the woman as Bertie dissolved into giggles as she watched Darcie try to squeeze into her Mercedes.

"Her hat has its own zip code!" Bertie cackled as they sped by.

Lakeshore Drive, set on the shore of Lake Harrison, was a showcase of early twentieth-century architecture. Many of the logging and mining families who made it big built massive homes along the road. Mena always enjoyed cruising down the street and feasting her eyes on the plethora of soaring cupolas and gingerbread trim.

They pulled up in front of a Victorian masterpiece of a house. Its exterior had been recently painted a very trendy dove grey, the multitude of adorning windows trimmed in black and farmhouse white. Mena wondered if a single dandelion plant would give the obviously well-paid landscaping company apoplexy.

"Oh look, Mena! She invited Harriet Festurn. Seriously? Those two have hated each other for years. Why on earth?" Bertie trailed off as she jumped out of Constance.

"Harriet is the chair of the Urban Renewal District. Come on Bert, keep up." Mena replied as her boot heels clicked along the cobblestone drive leading up to the stately home.

The farmhouse white stairs which led to the front door were gleaming, as were the royal blue glazed urns which held all manner of expensive and rare succulents lining the stairs. Mena felt her gaze drawn toward the pots, for she had a well-known affinity for all plant life.

"Welcome to Dovecote Manor, the festivities are in the back courtyard, through here." a young woman in grey slacks and a pale blue silk shirt told them. Mena noticed there were plenty of other perfectly turned out young people darting too and fro about the house, most carrying trays of food and drink.

"Did you see that cheeseboard? I bet some of that cheese cost more than my cruise to Malta last year!" Bertie hissed under her breath.

Mena tucked another errant auburn stand behind her ear. Something felt off about the whole thing. She couldn't quite nail down what was nagging her, but the staff, although smiling, were radiating strain.

"Bert, go get us a seat, I am gonna use the powder room," Mena replied, crinkling her nose and lilting her voice on the last part of her statement.

"On it!" Bertie departed in a swirl of sherbet frills and cheese-hounding intensity.

Mena waited until a blond-haired kid strolled by bearing a tray of Devils On Horseback and glided down the east hall. She had spent many an afternoon in this house as a middle school student, taking singing lessons from Lulabelle McHollister, a local legend.

She carefully padded down the gorgeous refinished herringbone-patterned wood floor toward the parlor. She stopped in her tracks when something smashed just beyond the doors.

"Please. don't do this right now, I have guests. We'll deal with it afterward okay."

Mena recognized Dara's contralto tone, but she had never heard the woman plead for anything.

"Of course, everything is more important than me. Fine, be that way you stupid girl, I knew I should have given you away. Everything bad about my life is because you exist." spat a voice more venomous than black mamba on steroids.

"You keep saying that Mother, yet you continue to hang around," Dara replied, her normally rich voice toneless.

"I feel like the only way to atone for bringing you into the world is to make sure I mitigate the damage you inflict. Gods, you are so stupid." Dara's mother spat in return.

Mena then heard a splash, a thud, and a gasp. The parlor door flew open and Dara stormed through it, slamming the solid door in her wake. Her grey eyes smashed into Mena's pale green irises. Multiple emotions strobed through Dara's face, shame, pain, and despair. In her beautifully manicured hands was a bone colored porcelain teacup, its contents were dripping down the front of Dara's lavender tea dress.

Here was the woman who had tormented and bullied her for more than two decades, laid before her like a retribution platter of unending vindication delights to partake from. Every barb, rude gesture, harsh word, and unpleasant incident flashed before Mena's eyes. Taking a breath, she stepped toward Dara, her gaze locked onto the woman's face. Mena lifted her cup in a toast gesture and dumped the Earl grey tea it contained all down the front of her favorite blouse.

Dara let out a confused gasp and stepped backward.

"What? I know it's not tempura paint, but I really think we are on to something here, don't you?" Mena continued as she reached her arm through Dara's.

A single tear escaped Dara's eye and slid down to join her tea-stained shirt. She reached into her dress pocket and pulled out her cell phone.

"Let's get it trending then," Dara replied as she linked her arm through Mena's and snapped a selfie of them both.

And as most of the time, all of the images in this post were taken on the author's not really fond of tea for electronic reasons obviously, iPhone.
The Ink Wellfictionwritinginkwellprompttheinkwellstorytelling
generikat73
via hiveblog
$ 14.55
701
H2
H3
H4
3 columns
2 columns
1 column
27 Comments