Ade a tall, peace-loving, gentle, and quiet man lived in Ife, a small town in the southwestern region of Nigeria. He was popularly called Ade Ife because people believed his nature lives on in the town. Ife was a small town with scanty houses sparsely distributed, the residents were mostly farmers and a few of them were herders. The town was surrounded by mountains with a major path that led into and out of the town. Ife was known to be a peaceful town; never had a case of crime heard among them, the king only accepts strangers after he must have learned of their pedigree.

"Kabiosi, Ade Ife had been missing for days" a woman reported to the king. The king was surprised at the news, Ade had never slept outside the comfort of his house, the farther he has gone was his farm which was just some miles away.
"Have you checked his farm if something evil had happened to him?" The king enquired.
"Yes kabiosi, even his fellow farmers confirmed they last saw him three days ago".
The king was troubled, there had not been such a piece of disturbing news in Ife. " Fetch the town crier, and instruct him to pass the news of Ade disappearance". 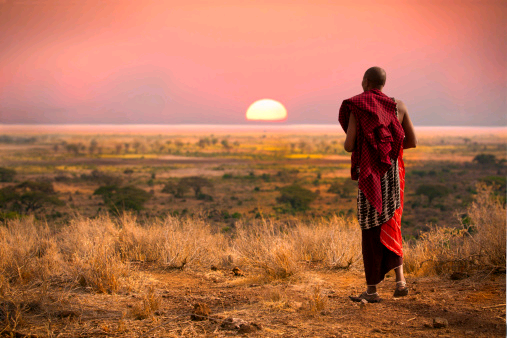 The town crier walked through the town, hitting a gong and crying out the news to the people of Ife, everyone became worried, women who were grinding in the millstone immediately forsake their wheat and ran to the king Palace, while those fetching water from the stream threw away their calabash and hurried to the palace, so were the farmers and herdsmen who abandoned their duties for the day.

"What is this we are hearing?" People mumbled among themselves, the women stood afar with their eyes widened, shocked at the news.
"Ade, Ade, where must he had gone" the chattering continued as they await the Oba to come to address them.
"My people, I am..." Just before the oba could complete his statement, a police van drove in on high speed and packed just before the palace, everyone stared in amazement, what was happening to Ife, the once loving and peaceful town.

"I greet you, sir," the police said addressing the Oba.
"You're welcome, but please to what do we owe this visit," the king asked.
"We learned a tall man by the name Ade comes from this town"
" Yes, we haven't seen him for days" the king explained.
" He was detained three days ago after we caught him with a baby he conspired with one Mr. John to kidnap"
No one believed him, Ade was known to be a peaceful man who likes people.
" Maybe you've mistaken him, it can't be the Ade living here" the Oba argued.
After much talk, it was proven to be the same, Ade. Everyone was shocked, the rumor soon sprayed around the town, Soon the town was troubled, people became skeptical about trusting another, If the peaceful Ade Ife could be a kidnapper, then no one was to be trusted.

Rumour held that Ade was released but he never stepped his foot in Ife again, he couldn't bear the shame.