Today we continue with the Parallel Programming series about the OpenMP API. I highly suggest you to go read the previous articles of the series, that you can find by the end of this one. Today we will get into how we define Parallel Sections.

With for loops we saw how we can divide the various iterations among threads to execute them faster when parallelization is possible. What if there are specific sections of code that can be run in parallel whilst other can't? 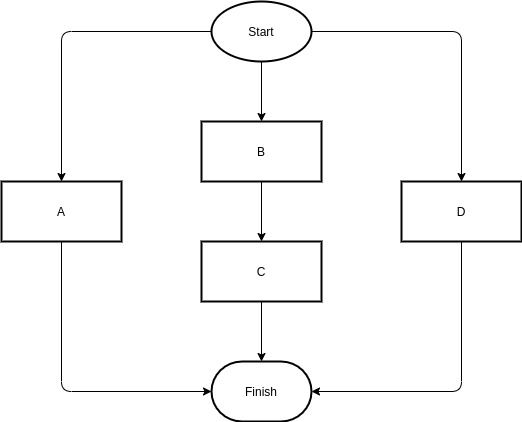 From the chart we understand that B and C have to be executed in sequential order (B → C).

That's were sections come into play...

A sections construct (with s!) is a directive that is used to define non-iterative work-sharing among threads in a team (that is already defined using a parallel section).

Independent section constructs (without s!) are nested within the sections construct. Each of these sections is executed once by a thread in the team and different sections might be executed by different threads. Its a matter of how quickly a thread manages to execute a section and how the implementation defines such behavior.

A sections construct with nested section directives is defined as:

To define sections and create a team of threads, at the same time, we can use the following shortcut: For example, for the flow-chart example we would write: That way A, B → C and D will be executed in parallel by 3 threads, with each one taking one section (possibly).

It's worth noting that a sections construct cannot be used inside of another work-sharing construct (like the parallel for that we saw). To implement more advanced work-sharing we have to use tasks, that we will cover later on in this series.

A similar construct that is quite useful when only one section inside a parallel region has to be executed by one thread.

Instead of creating a nested section inside of sections to write that code, we can just use a single construct.

The syntax of such a construct is simply:

If only thread 0 (master thread) should run this section then we can also use: Of course both of them make sense only when used inside of a parallel region.

The following clauses can be used to configure sections:

Let's execute a calculation of the Fibonacci series and the Factorial (!) in parallel by using sections.

The Fibonacci series is defined as:

The Factorial is calculated as:

To calculate the Fibonacci series in C we write the following function:

To calculate the Factorial in C we write the following function:

In the main function we simply define two arrays with size N and M (global #define) and create a parallel section to execute the two functions in.

which are the values that we expected...

There are of course better ways to use sections, but running two different operations in parallel is also not that bad(!)

Next time we will get into Atomic Operations and Critical Sections...