Today we continue with the Parallel Programming series about the OpenMP API. I highly suggest you to go read the previous articles of the series, that you can find by the end of this one. Today we will get into how we define Critical Sections and Atomic Operations.

Parallel For Loops are defined by using the following syntax: Non-iterative work-sharing is defined using a sections construct with nested section directives: To create sections and a team of parallel threads at the same time we can use the shortcut: When only one section inside a parallel region has to be executed by one thread then we can use the single construct:

I'm not sure how familiar everyone is with the term Synchronization. Thus, let's first approach the topic from a theoretical perspective.

In general processes can be split into two categories:

If all processes where independent to each other than there would also never be any synchronization problem! As no resources would be shared among the processes.

When multiple processes cooperate they mostly execute the same code, or more specifically access the same resource as others. If no synchronization is applied, in such a case, then the processes would race in order to access the shared resource, making the value of the shared resource uncertain. This is known as the race condition. As several processes access and process the same data concurrently, the output basically depends on the order in which the access takes place.

The race condition that was mentioned previously may occur in a so called critical section. A critical section is a code segment that has to be accessed by only one process at a time. Such sections contain shared variables that need to be synchronized in order to maintain consistency. The critical sections have to be treated as atomic operations and synchronized properly using locks.

In general a critical section can be described as: 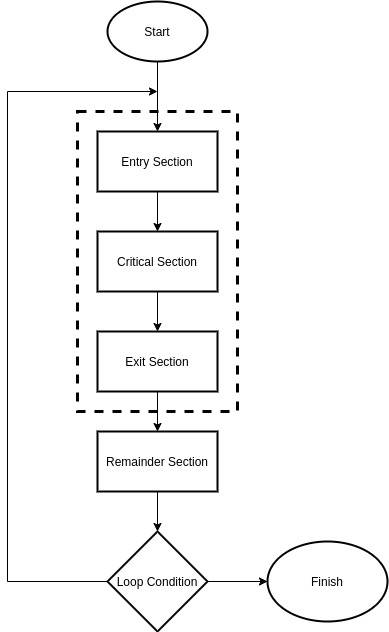 OpenMP offers lots of ways to synchronize the parallel threads that get created:

Locks will be covered later on in this series...the rest today!

To define a critical section inside of a parallel region in OpenMP the critical section construct has to be used. Using it we specify which specific region of code must be executed by only one thread at a time.

The general format of a critical section construct in C/C++ is:

Additionally, its also possible to define something called an synchronization hint. Hints are used for defining the expected dynamic behavior or suggested implementation for locks and atomic or critical directives using the hint clause. The effect of the hint does not change the semantics of the associated construct. There are 5 types of hints that can be used for synchronization, and they can be combined together using the + and | operators:

Of course combining the 2nd and 3rd, or 4th and 5th together doesn't make much sense!

The same hints with lock instead of sync, in the name, are used for lock synchronization hints.

For example, defining a critical section "update_data" with high contention and speculative implementation is done as follows:

A critical section construct is the more generic format of data synchronization. If only a specific operation or statement has to be accessed atomically then atomic constructs come into play.

An atomic construct is defined as:

The directive only applies on a single statement that follows it.

After the word atomic its possible to specify four optional types of atomic expressions:

Here only reading the value of x is guaranteed to happen atomically.

Here only writing to y is guaranteed to happen atomically.

In all those statements only updating the value of x is guaranteed to happen atomically.

Updating and reading is guaranteed to happen atomically.

Let's fill an enormous byte array with random values which are in the range [0, 255] (all possible 8-bit values). It would be interesting to see how much faster we can count the zeroes in the array in parallel...

Because we want a very large array (I used the maximum unsigned int value or UINT_MAX from limits.h), we have to allocate it dynamically using malloc and of course free it afterwards. To calculate the total number of zeroes, we have to use an unsigned integer counter that will be updated using an atomic update statement. Inside of a parallel for loop any thread then accesses the shared array and updates the counter when it finds a zero value. The execution time can be calculated approximately using the time in seconds since the UNIX epoch.

The same can also be done using a critical construct, but an atomic construct is more efficient in this case!

Compiling and Executing the program we get the following output:

As you can see, the parallel execution was much faster, because the critical section was only triggered in approximately 0.39% of the parallel distributed iterations of the for loop.

Next time we will get into Tasks, which allow us to define more advanced work-sharing...