We are just starting to see the beginning of the experimentation with an entirely new business model called the **decentralized autonomous organization (DAO). This is something very powerful that bears watching. This will likely be what takes over the 2020s. 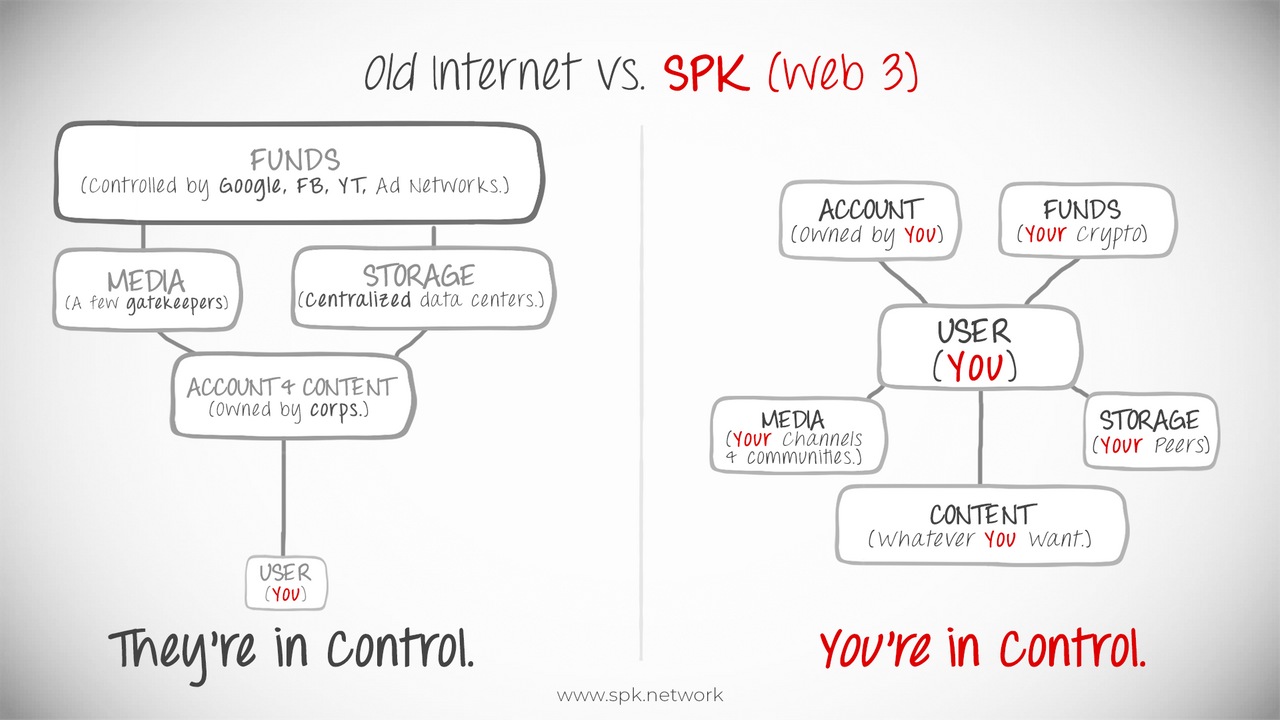 With all that is going on, decentralization is going to be a key component going forward. There is no way we can continue to keep feeding an economic system which favors powerful lobbyists, encourages monopolies, and has corrupt politicians legislating protection for their friends.

We see how wealth inequality grew tremendously over the last few decades. The more financialized the system becomes, the slower the overall growth rate is. More money is locked in the banking and financial sector, providing them the opportunity to gobble up assets, earning tremendous returns.

As for everyone else, well sorry about your luck.

Cryptocurrency offers a new start in this regard. Through the tokenization process, we can see how an entirely new model is forming. This is based upon transparency, communal ownership, and free market principles that were so long erased from our present system.

One of the most important premises of the DAO is ownership.

Let us look at how the SpkNetwork, being developed by @threespeak, is being set up.

Who owns the network?

The answer is nobody. Or everybody. This is key. The developers are not the owners. There is no corporation, board, or founder's stake. We are seeing a token process evolve that is based upon one's holding of Hive. Those that claim the tokens, which are miners, will then be able to get the main platform token, the SPEAK.

Here is where the governance of the system comes in. The SPEAK token gives people influence on the network. This allows for decisions to be made as proposal systems evolve. No individual or board makes those choices. Rather it is up to the token holders to determine the direction of things.

Of course, this could be a farce if the token distribution is not truly decentralized. There are many projects that use tokens yet where a few people have like 60% of the total. That is not decentralized.

Also, with the claim-drop that is taking place, it is the LARYNX token that is being distributed. This is the miner. People are free to sell it or buy ones on the open market. Hence, the mining operation will see a different outcome than the drop.

Operates Solely In The Digital World

As mentioned in the article DAOs are going to really drive government nuts, we are entering a world where these entities are on completely foreign ground.

This situation certainly applies to the SpkNetwork. Since the ownership is distributed, there is not single point of access. Those with tokens are spread all over the world, often not even known.

More importantly, this DAO exists completely in the digital world. There is no physical footprint whatsoever. The headquarters are non-existent. Corporate structures are only in the virtual. There is not even a mailing address to send a postcard, let alone a summons.

It means that governments have no means to impede upon the operation of the DAO.

Competition is also stymied by the simple fact the network is a protocol. It is designed to have other operations built upon it. The feature set that is offered is to be duplicated many times over. Since we are dealing, in large part, to decentralized video storage, each entity built on top can mirror what is underlying.

The key will be, of course, the token distribution. If done in a decentralized manner, there will simply be more DAOs created on top of a platform that is the same.

In short, it is a system that is is resilient, horizonal in implementation, and basically basically autonomous once established.

Being Tied To Hive

One of the key features is that the network will integrate the Hive token as its trading pair in the liquidity pools. This is vital since it incorporates the system into the Hive blockchain, which is one of the most decentralized blockchains out there.

The fact that the operation of the token at the base layer is distributed means that we have more protection for the entire platform. With the 20 consensus Witnesses along with 80+ backups, we see nodes spread all over the world. Between the base operations and the token distribution, taking over the network is rather difficult.

This, naturally, makes anything tied into less susceptible to disruption from the outside.

Another key feature is that the entire network utilizes Hive's account management system. Since it is tied to the blockchain, nothing is centralized. All accounts are in full control of the owner, the one holding the keys.

What this means is that not only are videos protected since the hosting is decentralized but accounts cannot be shut down. Once an account is established, as long as someone has the keys, he or she is in full control of it.

Ultimately, as these ideas spread, we will see viable options to the established entities that now operate in a monopolistic fashion. YouTube is known to use its authority to eliminate anything it sees fit. It will haphazardly change the rules on payouts, affecting the livelihood of thousands with a recoding of an algorithm. At the same time, people are de-platformed if the content goes against what they want.

None of this exists with a DAO. Ultimately, we have networks forming within networks. Each community establishes its own network, built upon infrastructure that is decentralized and distributed.

DAOs are going to be a revolutionary force. They will be able to operate with greater transparency than we see now along with less outside interference. Anyone is free to get involved as long as he or she has stake in the network.

SpkNetwork is looking to change the video game. That was dominated by a single, centralized entity for more than a decade. When it comes to ownership on that platform, users have none. This DAO seeks to correct that.

The DAO is something that should not be underestimated. It is going to have profound impact and is only just starting to be explored by the cryptocurrency community.

Over time, this is really going to spread as people start to set up system that mirror what was described in here.