Those who follow what is taking place on Hive know the situation is changing. Each day we discuss some of the new things that are going to be rolled out. At the same time, we get updates about the advancement of different applications and games.

While Hive is not a blockchain that gets a lot of hype or exposure, it is one that is steadily moving ahead. Instead of mass marketing or a charismatic personality to garner attention, Hive just keeps plugging along on the development front.

In short, people on Hive just keep churning out code.

Over the long-term, this is what is going to propel the top blockchains. Market activity can only last so long. Many of the top ranked projects are there simply due to potential. That certainly is not a problem if it comes to fruition. However, we know that expectations often go unmet.

Hive on the other hand is not a marketing machine. While this could be a negative in the short-term, it will not matter over time. As development keeps occurring, people cannot help but to find out what is taking place.

An interesting thing happen according to Blocktivity. For those who do not know, this is a site that monitors the daily activity on different blockchains. While there is some debate about the accuracy, over time it does appear to capture different trends with specific projects.

Those on Hive know the situation with Justin Sun. While there are still the Steem/Hive comparisons, it is ironic that Hive surpassed Sun's prized child, Tron.

According to the latest from Blocktivity, Hive is now ahead of Tron in transactions over the last day.

In the end, this is nothing more than a fun fact. The transactions can move up or down a great deal in a short period of time. Nevertheless, it is a reflection of what we know is taking place on Hive. Sure, a lot of it stems from @splinterlands, which saw a major upturn in sign ups and players over the last few months.

This is helping to feed into the overall transactions in spite of the fact they changed how things are posted, reducing the amount of data sent to the blockchain.

At the moment, Splinterlands is carrying the bulk of the load. However, we should see some other projects emerging in the next 4-6 months that will aid in this endeavor.

There is little doubt how important gaming is becoming to blockchains. The #Play-2-Earn concept is really taking off. Here again, we see Splinterlands at the center of the action.

Blockchain Gaming and DappRadar do a monthly report about the state of the blockchain gaming industry. It is no surprise that Splinterlands keeps capturing attention.

To start, they noticed the growth: 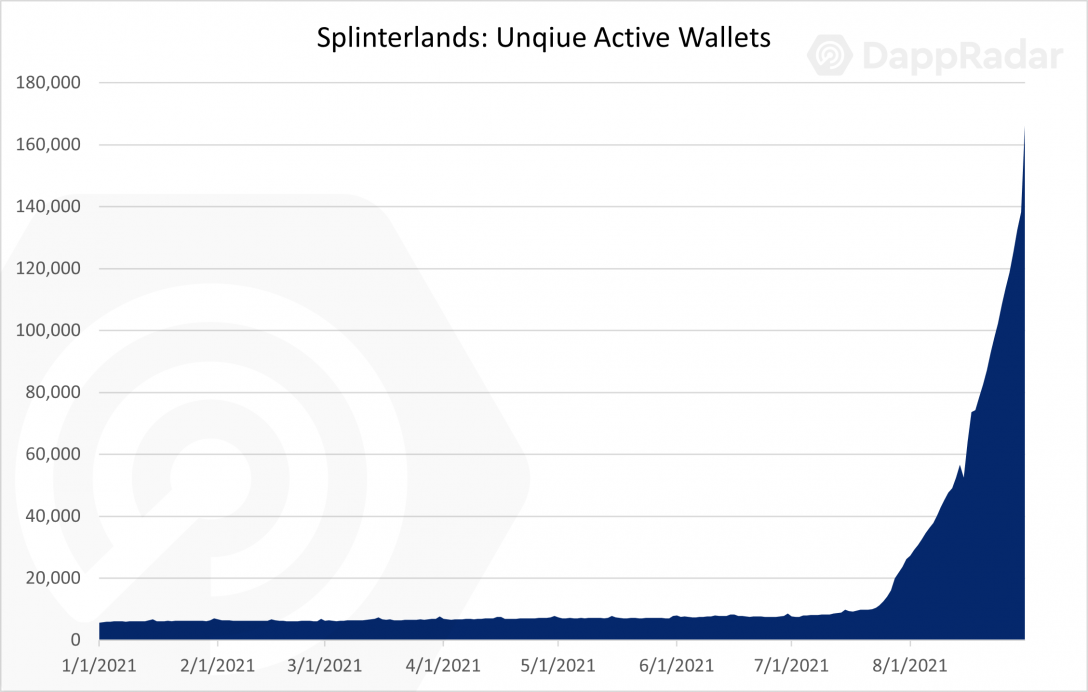 Obviously, the growth in wallet usage coincided with a massive leap in activity. This mirrors what Blocktivity was telling us.

As we can see, in August, the gaming transaction on Hive are second to Wax. It even surpassed BSC which got very popular earlier this year.

Another thing we notice is the jump, month-over-month. This also is no surprise since we noticed the number of sign up on a daily basis as well as the number of people getting starter packs. The game is really taking off.

Blockchain gaming is a vital aspect of what is taking place within this industry. Many consider it the path to mass adoption. A case could be made, at least by the wallet usage, that it is starting to take over. 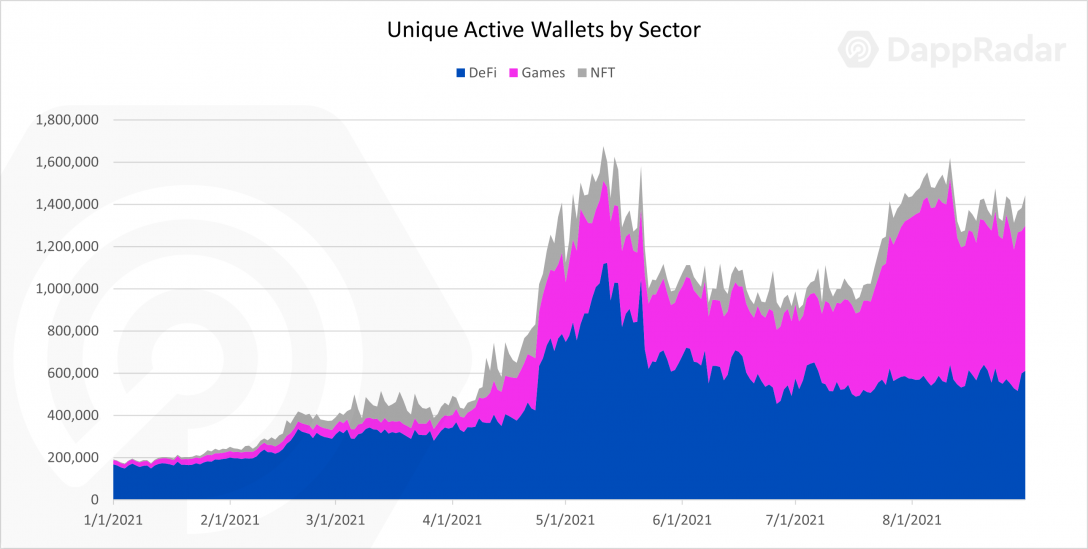 It is evident that gaming surpassed DeFi as the top use case. What is interesting is that NFTs account for a small percentage at the moment. This is such since NFTs and gaming are going to be tied together in many ways. Therefore, we can expect the wallets transacting in NFTs will explode as that feature is implemented in more games.

The original focus, going back to the genesis block, was on blogging. This was the main area of concentration for a number of years. While content creation is still a vital part of the Hive ecosystem, we can see from the numbers how we are moving far beyond it.

Ultimately, the most popular blockchains are going to be those which offer a wide variety of applications to use. In the end, people will not really care what chain they are on. What users focus upon is the experience they have. If they find something they like, what else is offered in the same area?

By this, we should focus upon the full compliment. We are starting to see DeFi become a larger part of the ecosystem. As people get rewards, either through gaming, blogging, or whatever, they will want to increase their holdings. DeFi is a way this is done. As more applications on Hive implement this capability, people will find their returns increasing at an even greater pace.

Slowly, Hive is moving up the ranks. We are witnessing the building of an ecosystem that is from the ground up. There are no shortcuts being taken and much is flying under the radar. However, there are signs that some things are starting to break out.

For the moment, Hive surpassed Sun's Tron in at least one category. It might not be groundbreaking but it does show how a community that simply gets busy can make a major difference.