Cryptoraiders (Extend all vowels and final 's' if yer ever in the Discord) is an NFT 'game' with its assets stored and distributed on the Polygon Network.

The core assets in the game (at least ATM) are the cryptoraiders themselves which are cute little pixelanimated NFTs you can send to raid dungeons for loot. 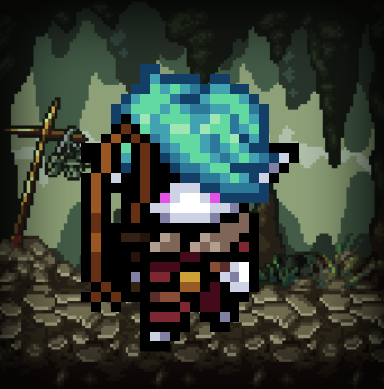 The current game play isn't up to much - you literally just click to send your raider to one of the above dungeons and then you just have to watch them wandering around with a bit of text and after 30 seconds or so they find some loot, the quality of which is determined by a dice roll. Once you have your loot you can equip your character with it, which gives them extra bonus points such as luck or agility, and equipped loot also changes the look of the character.

Raiding also gives you experience points, which sends your character up the experience levels, although it's not clear yet what different experience points or any of the other attributes which can be boosted by items are going to mean in future game play.

You can re-list your experience-buffed and tooled up raiders on Open Sea too, and the higher the experience and better the loot attached, the higher the price you can expect to get for one!

Not that I'd recommend selling any of your raiders, they are just too cute! There are 10 000 base Gen 1 characters with different rarities:

These initially went on sale on Open Sea on ETH and then had to be transferred across to Polygon where all the game play and trading takes place, so no need to worry about the fees going forward!

About a month ago there was a second generation minting event in which you could use your Gen 1s and 10 000 AURUM (the in-game currency) to mint a second gen raider, the rarity of which depended on the rarity of the Gen 1 raider, and this time with a chance to mint a new, even rarer character: THE FAIRY...

There will be opportunties in the future to min Gen 3 Raiders and so on, presumably!

It is not possible to die ATM in the two currently live dungeons, you can just raid for basic loot with no risk.

But in the future there will be a chance of dying for raiding tougher dungeons with monsters - but of course the tougher the dungeons the higher the potential reward - both in loot and arum, and eventually you'll be able to sell loot on OpenSea.

As I understand it the idea is to make LOOT quite valuable as some of it will confer significant bonuses on the chances of one's Raider surviving future raids.

There will be a chance of dying in future dungeons, so I guess the idea is to only risk your less valuable raiders in these dungeons, but the choice of course will be down to your risk-tolerance.

If you look on OpenSea you can see that Raiders have several attributes, such as luck, agility, intelligence and so on which you can filter for... As I understand it, once dungeons are up and running properly these attributes will influence your survival chances, as of yet there's not too much to see!

There are two tokens:

There is the option to stake both pure RAIDER for a variable return (paid in Aurum) depending on how long you lock it up for and to pool both Raider and Aurum with Matic to earn RAIDER.

50% of the Raider supply goes to these reward pools over a four year period.

The returns are good ATM....

You can read about the Tokenomics here, or just gawp at this: 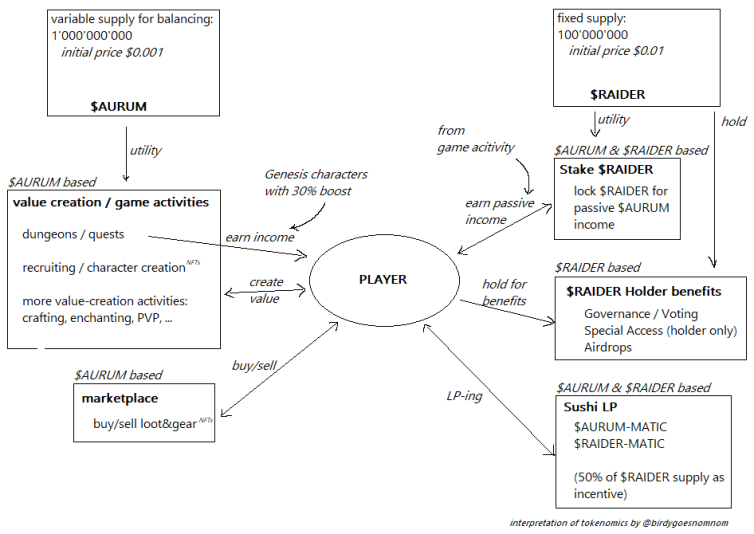 RAIDER stakers recently received an airdrop of MOB keys - each of these will allow holders to mint one monster (quality dependent on a dice roll) which they can place in dungeons to potentially steal loot from Raiders.

If you want to jump on board and buy a Raider - Opensea is the place to go, and/ or jump in the Discord, they're a pretty friendly bunch, just remember to call them Crypto Raaaiiddeeeerrrsss.