Crypto Adoption in Different Countries, Weighted by Cost of Living....

What this means is that it weights the value of crypto transactions according to how much a dollar would buy in each country - so if country has a lower PPP score than country B (meaning a dollar goes further in country A), and both countries have 1000 Bitcoin's worth of transactions in a year, then country A would rank higher than country B because the value of crypto is worth relatively more compared to the cost of living in that country.

Chain Analysis used 4 indicators to measure crypto adoption in countries around the world.

The top ten countries by crypto adoption are as below, and as the report notes they are truly global, and (my phrase) a very mixed bag.... I know that at least six of the countries - Ukraine, Venezuela, Kenya, South Africa, Nigeria and Colombia have issues with either high level corruption at the level of government, and/ or government incompetence resulting in persistently high inflation, or massive intrusion from the State next door - as in the case of Ukraine.

Russia and America are the two wealthy developed nations on this list, so no surprise that crypto adoption is big news there, neither is China given the extent of Bitcoin mining, but imagine's China's position to crash down the league tables in the next report.

Vietnam is an interesting final addition here, and could be one to watch for mass crypto adoption going forwards as an up and coming rapidly growing developing nation. 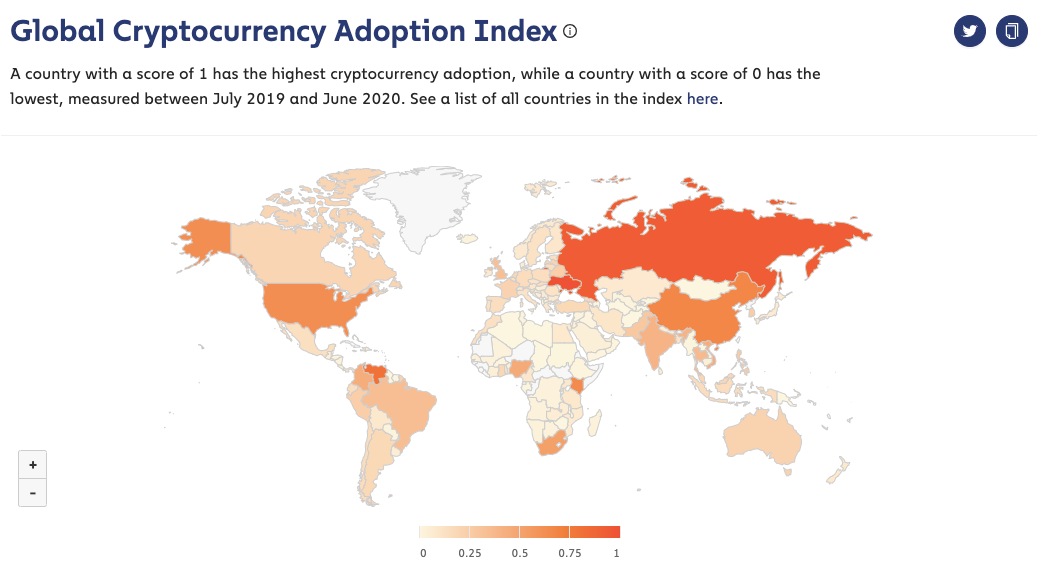 If we look at things globally - it seems that South America and Asia (most notably India) have slightly higher crypto adoption rates than Europe, and most of Africa have the lowest - with the three countries in he top 10 being exceptions rather than the rule!

So it seems that 'middle-income developing countries are the most enthusiastic adopters of crypto.

India seems like a country to watch - given the high population and excellent communications infrastructure - BUT there's also a good chance that this 'crypto adoption' is something being done by the very wealthy - there are several billionaire in India, and very high levels of wealth inequality, so I'm not sure how wide spread crypto adoption is.

Potential limitations with this data

Chain Analysis recognises VPNs might obscure the validity of this data, and this data tells us nothing about distribution of crypto wealth, so we'd need to dig deeper into individual case studies with surveys to find out how widespread crypto adoption actually is.

But TBH there's nothing especially surprising in the above data - the pattern of adoption kind of makes sense, and anecdotally we know that the USA/ Russia/ China (Bitcoin mining)/ Venezuela and Nigeria all have relatively high levels of crypto adoption, so I'm tempted to give a thumbs up to this report.

NB - If we don't 'dilute' the value of crypto by cost of living (PPP) - things look VERY DIFFERENT:

Latin America (with a much higher population) only received 7%

And Africa, with a MUCH higher population still, only received 2% of global crypto flows!

Crypto incomes potentially mean a lot more to people in developing countries because of the lower cost of living, HOWEVER, in terms of overall wealth flows, the majority of crypto is still going to the developed regions of the world!